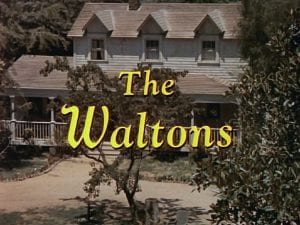 The Waltons was a TV drama series that ran from 1972-1981 (with several films that followed the series). With some 210 hour-long episodes over 9 seasons, it’s one of the longest running and most successful TV dramas and is often discussed in parallel with Little House on the Prairie, which aired during almost the exact same time period.

Created by Earl Hamner Jr., the series followed the tale of The Walton family as told largely through the eyes (and narration) of the family’s eldest son, John Walton Jr. (better known as John-Boy). He tells the tale of how his family, including his parents, John and Olivia Walton, his grandparents Zebulon “Zeb” and Esther Walton and six siblings struggle to survive the depression of the 1930s and World War 2.

Though the show is often thought of as sappy television for its strong family values, the program didn’t blink from the harsh realities of depression life including the tragedies and moral quandaries that were part of it. Death, disease and hardship were frequent visitors to the Walton family.

But, while it may not seem like depression-era struggles are a vehicle for conversations about plagiarism, John-Boy’s dream was to be a writer and much of the series centered around his efforts to become an author. This opened the door to a variety of ethical issues that writers face and, in the case of an episode early in the second season, one of the best and most honest conversations about plagiarism I’ve ever seen. 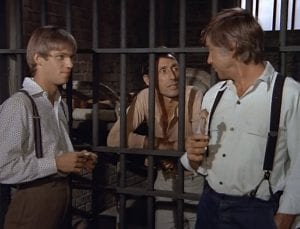 The episode involved is the sixth episode of the second season entitled The Chicken Thief. However, the main plot of the episode does not involve plagiarism. Instead, it centers around Yancy Tucker, another resident of the community.

John-Boy sees Yancy steal two chickens from Charlie Potter, a local farmer. Though he keeps what he saw a secret, he confronts Yancy about what he saw and learns that Yancy has been stealing from the wealthier in the area to give to those less fortunate. Not wanting to get John-Boy involved, he agrees to return the two chickens he stole. However, the next day it’s learned that Charlie was shot in the leg and, soon thereafter, Yancy is arrested as the prime suspect.

The community comes out to support Yancy, both visiting in jail and returning the chickens that he stole. Soon Charlie admits that Yancy didn’t shoot him, that the shooting was an accident and that Yancy was indeed there to return the chickens he had taken earlier.

But while the main story is already an interesting look at the ethics of stealing, it’s the subplot that deals most directly with plagiarism.

In that plot Ben, the second-youngest Walton son and third youngest of the children, receives a mysterious letter from Liberty Magazine. When pressed about it, Ben said it was “Just a letter” and shirked all questions about it.

However, he eventually confessed to his mother that the letter was written to congratulate him for winning a poetry contest the magazine had put on. But, rather than being excited, Ben was saddled with guilt because, as he put it, he had looked through John-Boy’s old poems and sent one in that John-Boy had written about his age.

His mom motivates him to be honest with John-Boy and tell him what happened. However, the encounter doesn’t go as Ben had feared. Rather than being upset over the plagiarism, John Boy was initially envious of Ben’s success (especially considering he had worked for years unsuccessfully to be published) but quickly realizes after comparing the two works that Ben didn’t plagiarize him. Instead, he merely took the idea John-Boy had and made a new poem with new words and a new central theme.

At the end of the episode, the family celebrates as Ben gets his copy of the magazine in the mail and  John-Boy reads the poem aloud for the family to listen. 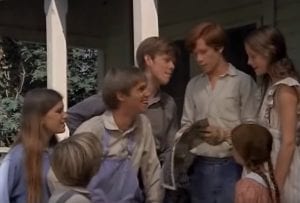 Of the stories we’ve looked at so far in this series, this one is unique because there actually isn’t plagiarism in it. The only intellectual theft is in Ben’s mind.

To that end, the story explores a very difficult but important aspect of plagiarism: The line between inspiration and theft.

Ben clearly felt that he had crossed a line. When talking with both John-Boy and his mother, he made it sound as if he had found a poem from John-Boy’s archives and submitted it under his name. It was only after John-Boy compared the works that it was shown there was any original writing at all.

However, the scene between John-Boy and Ben is one of the most interesting and realistic scenes about plagiarism I’ve seen. The emotions and confusion are palpable and believable, especially considering the complex ethical waters the two are swimming in.

At the beginning of the scene, after Ben tells John-Boy he won the contest, John-Boy’s first reaction is one of envy. Though his words are initially supportive, it’s clear John-Boy is frustrated that, despite his extensive efforts to be published, that his younger brother will be the first. He begins to vent some but Ben interrupts him, saying that he had submitted an older work of John-Boy’s.

Even through the envy, John-Boy told his younger sibling that he only took the idea and wrote a different poem with it. He notes that the works are about two different seasons, Ben’s about Winter and John-Boy’s about spring and that all of the words and rhymes are different.

“Hundreds of writers can take ideas from another writer,” John-Boy said, “My poem inspired you to write a better one.”

With that, the matter was resolved and Ben was able to enjoy his success.

This type of conversation, however, is fairly common. With creative works, it’s very difficult to know where the lines between inspiration and plagiarism are drawn. This leads many authors, especially inexperienced ones (like Ben), to think they had plagiarized when they hadn’t or, in some cases, to plagiarize when they thought they were just taking inspiration.

Though Ben’s story has a happy ending, it’s easy to imagine how it could have ended differently. For example, the story would have ended very differently if Ben had plagiarized, mistaking plagiarism for inspiration, and John-Boy recognized the work as his own when reading it later.

All in all, the episode was a powerful and frank look at the lines between inspiration and plagiarism, making it one of the best instances of plagiarism being the subject of a popular TV show.

The Waltons handled the topic of plagiarism extremely well. Even if the story wasn’t an actual tail of plagiarism, it dealt with a complex issue and, even with just a few minutes of screen time, handled it in a detailed and appropriate way.

However, that shouldn’t come as a shock. The show regularly handled difficult issues including death, racism, poverty and more. Plagiarism, in many respects, was one of the easiest topics they covered.

One interesting side note is that, throughout the entire episode, the word “plagiarism” was never used. Ben repeatedly claimed that he “stole” or “took” the poem, but never that he plagiarized. It’s an interesting choice but one that very much fits the language of the character and the time period.

All in all, it’s very interesting to see a TV series look at plagiarism not in a complex and nuanced light With the other shows we’ve covered, the plagiarism was pretty clear cut but, in this case, we get a bit of a more in-depth exploration of the topic.

Which is pretty amazing, considering how little of the episode was dedicated to it.