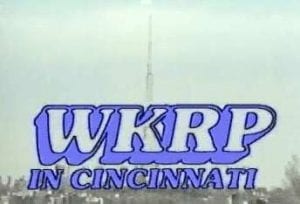 WKRP in Cincinnati was a sitcom that focused on the trials and misadventures of a small radio station in Cincinnati, Ohio.

Partially based upon the real-life experiences of the show’s creator, Hugh Wilson, the series didn’t shy away from harsher realities of running a radio station during the late seventies and early eighties.

The show itself ran from 1978 to 1982 and lasted for 90 episodes over 4 seasons. However, the show doesn’t seem to have aged very well with none of its episodes, other than the first season, being available for digital distribution. However, they are available via DVD.

The show centers on Andy Travis, the station’s program director who is struggling to wrangle the incompetent and insane staff he has been tasked with turning around. That staff includes Dr. Johnny Fever, a disc jockey who was previously fired for saying the word “booger”, Les Nessman, an incompetent news director and Jennfier Marlowe, a blonde bombshell that serves as the station’s receptionist and, at times, it’s conscience.

Since the show is based on a radio station, it makes sense that journalistic integrity would be a topic of focus. However, it wasn’t until nearly the end of the show’s run, in episode 18 of its fourth season, entitled Dear Liar, that plagiarism and fabrication became the focus.

However, when it did, it became one of the most interesting and honest takes on plagiarism and fabrication to ever air on TV, even if the conclusion was less than satisfying. 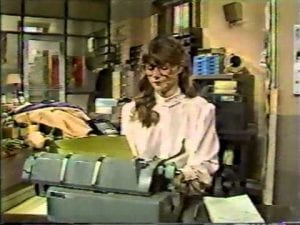 The episode in question begins with the station’s news director, Les Nessman, promoting an upcoming documentary on the decline of rutabagas to the mockery of Dr. Johnny Fever.

After he’s done, the station’s programming director, Andy, comes in and reminds Les that he was supposed to clear his “surprise” documentaries with him first. He then presents Les with a new assignment, to cover the financial situation as a local children’s hospital, which Les is reluctant to do.

However, after some cajoling, Les agrees to do the spot but clearly is unhappy about it. As he leaves, he confides to station reporter Bailey Quarters about the piece. Bailey offers to do the piece for him but Les initially refuses saying, somewhat disrespectfully, that Bailey is not ready for field work. When Bailey balks Les allows her to take the assignment promising to let her read it “if it’s good enough” and the two part ways.

Bailey goes to the hospital but is greeted skeptically by the staff. However, she convinces them to help her do her piece and returns to the station to write it. There, she pecks away at the piece on a typewriter but is eventually coaxed away to lunch by Jennifer.

However, as Bailey is working on her piece, Les is in the studio continuing his documentary about rutabagas. Andy, hearing this, confronts Les and demands that he run the hospital story before continuing his rutabaga story. Les then sits down at the typewriter Bailey was working on and begins reading her work.

Les then begins to read Bailey’s draft on the air. He reads it word-for-word, including a passage about a young patient named “Bobby” pulling on his skirt, which he corrects as “shirt”, and another about bearing children, which he corrects much more awkwardly.

Bailey hears this and tells Jennifer about Les’ actions. However, when talking to her, she confesses that the story is fake. That Bobby does not exist and the drawing that she claimed he handed her is also fictional. Jennifer claims that they could lose their license but, before they can act, the station learns the Cincinnati Inquirer is interested in the story.

Bailey confronts Les about his plagiarism and Les agrees to share the byline. When Bailey says she can’t hand over the drawing, Les tries (pathetically) to bribe her. It’s then that Bailey confesses that the story is fake and says she was going to rewrite it but Les took it before she could.

Andy and Arthur, the station’s “Big Guy”, are now aware of the scandal (alerted to it off screen). Les and Bailey join the two and all four begin arguing. Les accuses Bailey of fabrication and Andy accuses Les of plagiarism, instructing him to look up the word in the dictionary.

Andy then talks with Bailey in private. Bailey explains that she saw things much more horrible than anticipated at the hospital and, rather than tell personal stories, merged the children into one fictional character. She then asks if she should turn in a two week notice or just be fired on the spot, to which Andy balks.

Bailey then recalls the story of a Washington Post reporter who fabricated and was fired but Andy says that things are different at WKRP. Though he’d like to have higher journalistic integrity, he acknowledges that the staff is incompetent and promises to take care of everything without firing anyone.

Instead, he only warns Bailey that, should it happen again, she will be out of a job.

The next day, Bailey shows up at the station to learn that her story has been run in the paper, but under her byline and with a prologue that explains “Bobby” is just a fictional combination of all the patients she saw.

To make matters better for Bailey, the woman from the hospital stops by the station to report that the story has greatly increased donations and that many of the patients drew her flower pictures to thank her.

Meanwhile, as the show closes out, Les is on air doing a story about hogs, much to everyone’s laughter.

For years journalism ethicists have asked themselves which is worse, plagiarism or fabrication?

Both are lies. But one is a lie of fact and the other a lie of sourcing. Both are bad and both are very serious, but it’s rare we get both in the same story.

The set up for this story has the potential to be the source of countless hours of ethical debate in the future.

Did Bailey really commit fabrication? While she certainly put falsehoods to paper as Les accused her, there’s no evidence she intended to submit that version. In fact, she was clearly struggling and unhappy with the piece when Jennifer coaxed her to lunch and, after it’s falsehood was discovered, she repeatedly said (weakly) that she was going to edit it before Les took it.

As for Les, yes he did plagiarize but bylines at newspapers are/were tricky things and plagiarizing from within an organization is generally treated very differently than plagiarizing from external sources. Also, what about Andy? He openly admits in the episode that their journalistic standards are lower than the Washington Post’s and that they’re going to find a way to make things work without firing anybody.

Finally, you have the interesting moment where Bailey mentions Janet Cooke, the likely inspiration for the episode. In 1981, Cooke was forced to return a Pulitzer prize and was fired from the Washington Post after it was learned the fabricated the story of “Jimmy”, an 8-year-old heroin addict. This took place just one year before the episode aired and clearly was on the writers’ minds when drafting it.

All in all, this was a great setup that, unfortunately, had no pay off. Bailey’s fabrication is washed away with a prologue upon the story’s reprinting. Not only does she go unpunished, but she winds up being more loved and is credited with saving the hospital.

As for Les, his only punishment for his plagiarism is to look up the word in the dictionary. The act doesn’t even phase him as Les doesn’t even understand that Andy and others are calling him a plagiarist. He too learns nothing as, when the show ends, he is airing his own documentary about hogs written in the style of Bailey’s with obvious fabrications.

To be fair to WKRP, it is a sitcom and, as part of that, it needs to maintain consistency. It couldn’t trivially fire or suspend either Bailey or Les. However, for all of the talk by the characters about how serious both the fabrication and plagiarism were, it ended up being handled very flippantly in a very rushed conclusion that belied some great ethical questions that the episode managed to raise.

This episode is a very interesting specimen in this series, though it aired a few years after The Facts of Life episode we discussed, it didn’t conclude the ethical issues nearly as well. There were no serious consequences for Les or Bailey, even though everyone at the station commented how serious their actions were, and everything was wrapped up in a neat sitcom ending.

Still, the issues it does raise are far more complex than any of the other episodes we’ve looked at and the scenario crafted is definitely a unique one. This story can definitely be used for some great conversations about ethics, so long as one ignores the rushed ending.

I could easily imagine journalism professors showing this episode to their students and using it as a jumping off point for conversations about ethics. Sure, the scenario is exaggerated and unlikely to ever happen in a newsroom, but the questions it raises can be useful in explore more mundane ethical quandaries.

All in all, it’s an episode that’s well worth watching, even if that conclusion leaves a great deal to be desired. It managed to craft a nuanced and complicated ethical dilemma, it just didn’t find a way wrap it up appropriately.