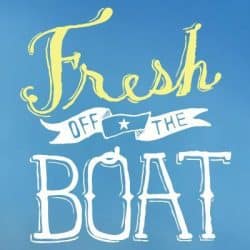 As we discussed when we looked at The Goldbergs, usually this series focuses on pieces of classical culture that use plagiarism as a plot device. But, once again another modern show has stepped up and used plagiarism in an unusual way, making it worth a closer examination.

This time around it’s the show Fresh off the Boat, which features a Taiwanese family, the Huangs, which move to Orlando to start up a steak restaurant. The show primarily focuses on Eddie, the eldest of the three brothers, as he eschews traditional Taiwanese values in favor of more Americanization.

Currently in it’s fourth season, the story of the Huangs has produced a lot of laughs but also touched on more than a few serious subjects as well. But when plagiarism came to the show, it wasn’t Eddie or any of the Huang family behind it. Instead, it was Eddie’s school, East Orlando High, with the aid of one of Eddie’s friends, Dave Selby.

It all took place in the latest episode (as of this writing): Season four episode 9, entitled Slide Effect. 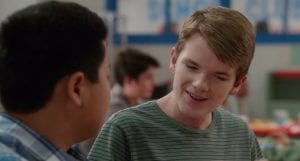 The episode began with Eddie learning that all of the other kids in his group of friends have taken up hobbies or joined clubs that he feels are “lame”. One of those is Dave, who is playing the lead in the school musical.

Dave explains that the school couldn’t get the license to perform Rent so they are doing their “own version” entitled Brent, where he plays the evil landlord, also named Brent.

“It’s pretty much the same show,” Dave says, “only instead of AIDS everyone has the flu.” 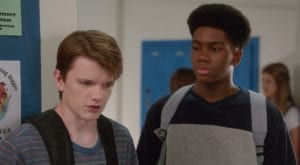 Eddie becomes increasingly frustrated with his “lame” friends. This includes another one of his friends, Trent, who had joined the safety patrol. Trent ratted out the school to the producers of Rent and the kids find out that the school is being actively sued.

After Eddie’s frustration reaches a breaking point, he joins up with a group of older “cool” kids whom he eventually helps break into the principal’s office to steal back some Hackey Sacks. The only reason the heist was a success was because the principal was away dealing with the lawsuit. 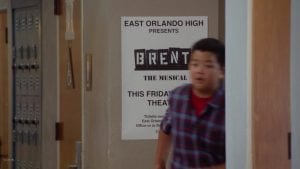 When his new friends take things too far and steal money from the school, Eddie pays back the money and makes things right with his real friends. At the end of the episode, they are all attending the opening of Brent, which features songs clearly lifted from Rent with minor modifications.

However, partway through the performance, the principal races in and shuts the performance down. As she gathers up the programs for shredding she says “We are in fact in violation of copyright so live and learn I guess.” 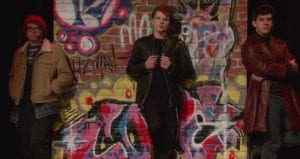 This plagiarism is very different from the others we’ve looked at. First and foremost, it’s a plagiarism episode that is steeped heavily in copyright. Normally when TV shows look at plagiarism they don’t delve into the intellectual property issues, instead focusing on the ethics of the plagiarism itself.

The other difference is that the plagiarism itself doesn’t happen on camera. Instead, all we see is the aftermath of an act that took place before the episode started. In fact, we don’t even know for certain who the plagiarist actually is as the author of Brent is unknown.

Indeed, the plagiarism plot is very much in the background of this episode. It’s mentioned explicitly in the beginning and end but, while it plays a key role in the main plot, it only gets mentioned in passing.

However, what clearly happened is the following order of operations:

But as crazy as that series of events might seem, it’s not actually that insane.

First off, schools do have to get licenses to perform musicals such as Rent. Often times, those licenses are cost-prohibitive, forcing the schools to either perform original works or public domain materials.

Though few schools get their performances cancelled on copyright grounds, many are cancelled over the content, such as what happened when one high school tried to perform The Breakfast Club. However, that play also raised copyright concerns as it doesn’t appear it was licensed.

Still, copyright can strike school performances. High schoolers in Canada had their YouTube performances of Hamilton songs taken offline and another school ran into copyright issues when it tried to edit Rent in order to make it more palpable to the audience (even though it was already the “School Edition”).

Still, while the exact scenario in Fresh Off the Boat doesn’t appear to have happened, it’s not that far fetched either. All it would require is ignorance about copyright law, a desire to skirt paying a license fee and someone willing to take a stab at making “their own version” of a popular musical.

The first two things I know first hand are in abundance, the latter, I’m sure, can’t be far behind.

The primary goal of this plagiarism wasn’t to truly commit plagiarism, but to avoid paying a license fee. While certainly the school was claiming that the work was original, it was all done with a wink and a nod knowing it was a loosely-modified version of the original.

However, those changes didn’t make it original enough to not be a plagiarism nor did it make it non-infringing. Perhaps while shredding the programs, the principal can ponder why it’s wrong to take the work of someone else, make a few changes and claim it’s original.

Some will argue it’s not plagiarism at all because it’s unclear if the school (or the author) took credit for Brent. However, there’s no real way to make your “own version” of Rent. Besides, when the changes are this small and transparent, claiming any originality at all is still plagiarism.

As for the response to the plagiarism, it was highly appropriate. If a school were to do this it would likely be found out (Trent’s are everywhere) and would likely be contacted by the rightsholders. However, it is more likely they would send a cease and desist letter than skip straight to a lawsuit as in the show. Furthermore, it’s even less likely that the school would fight the lawsuit or that the play would get to opening night.

A school just isn’t going to spend dollars defending a clear plagiarism and infringement such as Brent. In the real world, it would have been weeks before, not opening night, when the play would have been cancelled and probably with nothing more than a formal letter from the rightsholders.