Twitter bots have been in the news a great deal lately.

Though much of their focus has been on their role in U.S. and international politics, they are also well known for their commercial activities, peddling everything from scams to pornography.

The problem has grown so serious it’s hurt Twitter’s relationship with advertisers and celebrities alike.

But Twitter spam bots aren’t limited to just pushing cam chats, questionable dating sites and pharmaceuticals, they’ve branched out into other areas as well. Most notably for our purposes is the pushing of essay mills.

Even now, in the dead of summer, you can find a constant stream of bots pushing essay mill and custom writing services. From behind  stolen photos and fake followers, they promise “plagiarism free” and “wholly original” essays, dissertations and research papers.

So how serious is this? Probably not very. However, it is interesting to take a look at the world that is automated Twitter spam for essay mills.

Breaking Down the Bots

Twitter is something of a bot heaven. It’s a service that’s very easy to create bots for, whether your intentions are legitimate or nefarious.

This has lead to the rise of some really interesting legitimate bots, but also an army of spam bots.

Fortunately, spam bots are fairly easy to spot. However, that doesn’t mean that they aren’t a problem, especially when they flood legitimate accounts with fake follows.

But it doesn’t seem to be the essay mill bots that appear to be doing the rampant following. Their accounts, at least in the sample I looked at, are marked more by lower follower/following counts, high tweet counts and, most bizarrely, images of beautiful women.

It was a theme that repeated itself over and over again as I checked out the bots. Most contained profile pics of models, names and locations that were from all over the world and mixture of tweets that includes essay mill spam, retweets of other bots and nonsense. 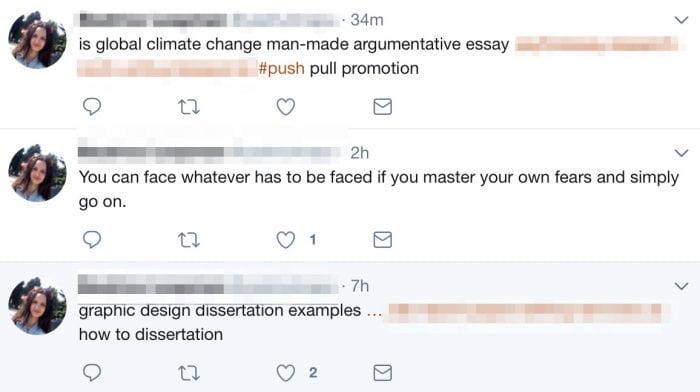 Most of the accounts were new but not incredibly so. The vast majority joined between March and April but some went as far back as July 2016. None that I observed had launched in the past month.

All of the accounts were very active, posting multiple times per day and would frequently like and retweet similar accounts, indicating it’s likely a singular network.

Still, these accounts were very pervasive and hitting on a large number of keywords. Though I started my search looking for “plagiarism free” it’s clear they’ve targeted just about every keyword related to essays and citation one can imagine.

As for the sites they point to, they all appear to point to different domains. However, if you click through the links, they all point to the same essay mill site named Superbpaper. That site, in turn promises essays for all all educational levels, ranging from high school through PhD.

Whether these are affiliates acting on Suberbpaper’s behalf or the site acting directly is impossible to tell. Either way though, the end result is the same, these spam bots are probably generating a decent amount of traffic (and possibly customers) for the site.

But while Superbpaper’s bots seem to make up the lion’s share of the plagiarism spam on Twitter, they aren’t the only ones in the game, other sites are involved as well.

While most of the Twitter spam bots (right now) seem to point back to just one essay mill site, that doesn’t mean that there aren’t other essay mills trying to engage on Twitter and doing so in spammy ways.

One, for example, has been around since October 2014 and has tweeted nearly 13,000 times despite having only 6 followers. 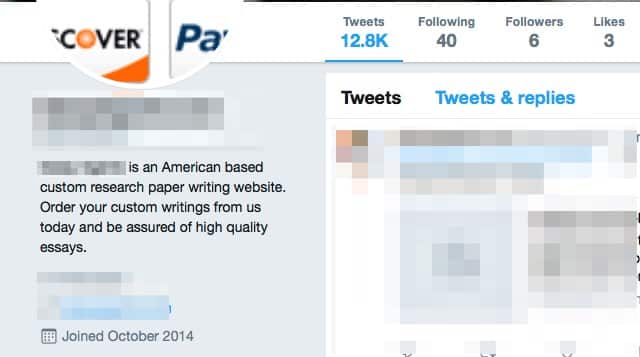 Another simply alternated between sending out the same public message and (incorrectly) replying to people who used keywords that matched their target. 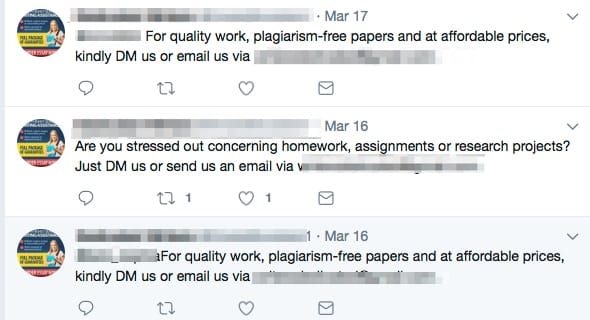 However, most of these accounts didn’t target users directly. They just pumped out fake and repetitive tweets that attracted very few followers (the one above has just 12 despite being active since March 2017).

The common theme that all of these accounts had is that they were trying to get you to contact them privately. They had no interest in public interaction and either wanted a DM, an email or a visit to a website.

Public conversations, it seems, are not something essay mill Twitter accounts are keen on, something that makes sense given what they are peddling.

But all of this brings us to a simple and serious question: Why Twitter?

The answer actually has very little to do with essay mills at all.

First off, it’s important to note that you’ll find similar bots on just about every type of social media. Essay mills keep a presence just about everywhere there might be customers.

First and foremost it’s because Twitter is a relatively open platform. Though not as open as it once was, it’s still trivial to open and maintain bot accounts.

The second reason is because those bot accounts are a lucrative business. They can be used to sell followers to those desperate to get their numbers up and, once they’ve been created, those accounts can then be used to do just about anything else.

Most commonly, that something else is to promote whatever is lucrative, whether it’s propaganda or to advertise products.

As for the products they advertise, they are just like spam email in that they’re going to promote things that traditional advertisers wouldn’t touch, either due to ethical or legal concerns.

In the end, there probably isn’t much to worry about with the essay mill spam on Twitter. Bots on Twitter are all-too-common these days and it appears that there’s only one network promoting one essay mill at this particular time.

And while there are other essay mills engaged on Twitter in spammy ways, they, for the most part, aren’t attracting a following. Essay mills are pervasive on the internet and Twitter simply isn’t the way they find most of their customers.

That being said, it says a great deal about such sites that they resort to these tactics. When an essay mill behaves the same way as a site promising live sex chats, it points to how legitimate the industry actually is.

So, while essay mills definitely have a strong presence on Twitter, it’s more of a curiosity than a serious concern. At least at this time.