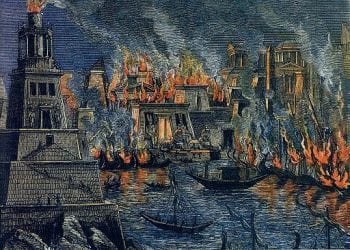 The Royal Library of Alexandria (or Ancient Library of Alexandria) is one of the most powerful symbols in our history. From its construction in the 3rd century BC to its accidental burning by Julius Ceaser in 48 BC, the library has come to represent both the cumulation of knowledge and its destruction.

The impact of the Library of Alexandria has been so great that the structure of the library has remained the inspiration for university campuses thousands of years later.

However, surprisingly little is known about the library. We know it was founded by Ptolemy I, a successor to Alexander the Great, and that it stored its books mostly as papyrus scrolls. However, we don’t know the size of the library, with estimates ranging from 40,000 to 400,000 scrolls, nor do we know definitively when it was destroyed with it seeming to continue operation after the fire that destroyed (or damaged) it in 48 BC.

But while many of the details of the library seem to be lost to history, there is one thing that is known: To create a library worthy you have to first accumulate all of the books to put in it.

So how did the library accumulate its tomes? At least some of it came from a sort of reverse copyright, which saw books be forcibly taken from their owners and copied without their permission. 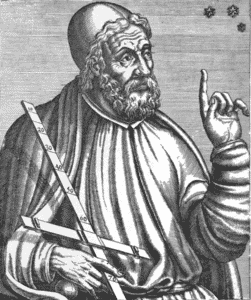 To be clear, most of the library was likely accumulated through more traditional means. Through the entire Ptolemaic dynasty Egypt would send scholars over the known world to purchase books and documents.

However, the Ptolemaic dynasty also used other means to accumulate books, most notably boarding ships as they entered into the harbor in Alexandria and requisitioning all of the books on board.

Those books would be taken to the library where scribes would then produce copies of the books to give back to their owners. The result was that book owners sailing into Alexandria would have their books taken from them and then only receive new copies to replace them.

Though the government would reimburse the original owners, it would only do so some of the time and rarely adequately. There’s one story of Ptolemy III requisitioning original writings of Aeschylus, Sophocles and Euripides, returning the scribe’s copies and only reimbursing fifteen talents of silver.

Books taken this way were often titled or tagged as “books from boat” to indicate where they came from. While it’s unclear how many such books were taken, there are accounts of seeing such books in the library.

Still, many travelers were unhappy to have their original books taken from them. Even though they received newer books in return, many felt the compensation was unfair though there was little they could do about it.

Obviously, this would never happen today, at least not in a nation with a functioning government. Not only would the author’s copyright prevent it but property rights, in general, would stand in the way.

The story highlights just how different the relationship between government and individuals was two thousand years ago and how things have changed.

The closest we have today is here in the United States where, in order to register your work with the U.S. Copyright Office, you are required to deposit copies with the Library of Congress.

Still, in the time of Ptolemy I, authors were likely unaware of what was going on and, if they were, they had no issue. It would be another  128 years after the burning of the library that the word “plagiarism” would first be used and, even then, it was an objection to a lack of payment, not to the copying or the lack of credit. (Edited for error in BC math).

Modern copyright law wouldn’t be around for 1,750 years after the burning of the library, meaning it would be another millennium and a half before authors could refuse to allow copies of their work.

Instead, the complaints against the practice came from the book owners. Books, at that time, were relatively rare and difficult to copy. Taking an original book and replacing it with a new copy was rarely seen as a fair trade.

Still, it may be easy to see Ptolemy and his successors as taking bold steps to preserve the world’s knowledge. However, that isn’t fully true either.

While it is clear that Ptolemy did have a genuine love for collecting knowledge and science, at the time libraries were a way for cities to showcase their wealth and power. Though the Library of Alexandra may be the most famous today, it competed with many libraries, most notably the Library of Pergamum.

Also, the centralization of all of those original works didn’t end particularly well. After all, the library’s most famous act is burning and, though it continued (or resumed) operation after the fire, many original works were destroyed.

So, one way to look at the Library of Alexandria is that it was the greatest collection of knowledge at that time and that its destruction changed the course of history. The other is that the Ptolemaic dynasty aggressively collected original works as a means of boosting Alexandria’s prestige but, in doing so, put those works in much greater risk of destruction.

In the end, it’s unlikely that these works would have survived whether they were put into the library or not. Time has not been kind to works from this time period and, as we discussed above, there were other libraries of significance in this era.

Still, the story of the Library of Alexandria does get more complex when you learn how at least some of the shelves were likely stocked.

Historically, time has been the biggest enemy of creative works. Many of cinema’s earliest works have been lost to time, even though they are only a century old.

This is largely because the preservation of creative works did not become a serious concern until more recently. Today, we have many libraries that easily dwarf the largest estimates of the Library of Alexandria and those libraries not only are committed to access but also to preservation.

Still, it’s almost certain that the Library of Alexandria hosted a larger percentage of the works available in the world than any library does today. Though 400,000 works may represent a modest library today, in an era where books had to be copied by hand and literacy was rare, it likely represented a sizeable portion of the world’s writing and knowledge.

However, the Library of Alexandria didn’t amass its massive collection just by purchasing and acquiring books the old-fashioned way. It got at least some of them by taking books by force from travelers, copying them and then keeping the originals.

It’s an interesting story from a very different time.