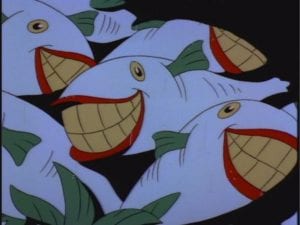 Note: Over the past few months, I’ve been doing a series on Plagiarism in Pop Culture. This is not part of that series but was something I discovered while working on it that I couldn’t resist sharing.

When it comes to Batman villains, the Joker is not widely known for his rational schemes. Generally, his plots only make sense in his own twisted mind and usually have more to do with getting a laugh than taking over Gotham.

However, one of the Joker’s most insane plots didn’t involve electric joy buzzers or bladed playing cards, but rather, copyright law.

While the idea of the Joker making his way down to the the copyright office is pretty strange in its own right, the fact he was there to copyright a fish is probably the reason you clicked on this post.

So let’s take a moment to revel in this moment of extreme copyright oddity as we discuss the plot where the Joker tried to copyright a fish in a plot to collect millions in royalties on fish sandwiches and, somehow, take over Gotham. 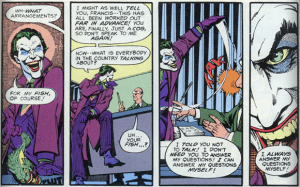 The story involved is entitled The Laughing Fish and there are two ways to get it. It made its first appearance in Detective Comics Vol 1 #475 & #476, which was published in 1978. However, the most famous incarnation of the story was season 1, episode 46 of Batman: The Animated Series.

However, both stories are largely the same but we’ll focus on the TV version as it is most focused on the copyright elements and the most famous.

The episode begins with fishermen pulling a haul out of Gotham Harbor only to discover that the entire batch has been contaminated, all of the fish have a large human smile akin to the Joker’s. Batman, who observed the fishermen’s plight, began to investigate.

The next day, the Joker (with Harley Quinn and two goons in tow) storm into the Gotham Copyright Office to demand that the office grant him a copyright on the aforementioned fish.

The Joker, as he explains it, put a toxin into Gotham Harbor turning all of the fish into “Joker Fish”. As such, he wants to copyright the fish and collect royalties on every fish sold in the city. 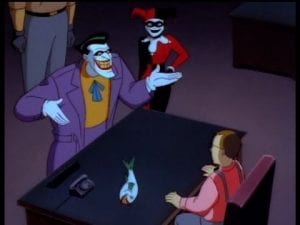 The employees at the Gotham Copyright Office tell him they can’t do that, saying there’s no way to copyright a fish. This enrages the Joker, who slaps one of the bureaucrat with a fish and threatens his life, prompting Harley to douse him in perfume because of the smell. The Joker then tells the man that has until midnight to change his mind.

Meanwhile, Batman has determined that the fish are not toxic to humans, other than the disturbing face, and rushes to the home of the bureaucrat in order help protect him from the Joker’s threat. There, he’s joined by Commissioner Gordon, Harvey Bullock and a small army of police officers.

However, the protection is for naught as the Joker uses a missle to fill the room with toxic gas. Batman and the police are unaffected but the bureaucrat begins to succumb to a violent laughing attack. Batman quickly injects him with an antidote, causing him to fall asleep but be otherwise unharmed.

Batman quickly deduces that the gas was the second part of a binary compound, the perfume being the first. But they don’t get much time to rest as Joker announces the name of his next target, another employee at the office, if his demands aren’t met by 3 AM.

The police and Batman move to the new target’s house and seem to have the scene secured. However, the man’s cat comes in carrying a Joker Fish and immediately attacks Batman, sending him into a laughing fit only to get an injection to save his life. It’s then revealed that Batman had swapped clothes with the intended victim in hopes of fooling the Joker but the cat was able to target his owner with ease.

Harvey, angry at the second failed attempt to protect a citizen, storms off to confront the Joker. Batman, realizing the fish was a unique species deduces that the Joker must be at the aquarium.

Harvey, however, gets there first but is captured by the Joker. However, before the Joker can kill him Batman arrives and, in a very typical comic book battle, manages to save Harvey, beat the henchmen and give chase to the Joker. However, the Joker escapes by jumping into the harbor, where many believe him killed.

(Note: The biggest differences between the comics and the animated series are that, in the comics, the bureaucrats are killed rather than being saved by Batman and the ending works out completely different as it’s part of a larger story arc.) 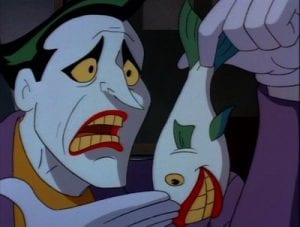 The plot is insane, even for the Joker.

However, there is one small kernel of truth to it: You can register and protect the copyright to clown makeup. In short, if it can be shown that the Joker’s makeup is unique enough, he could theoretically register it and stop others from using it.

But that’s not the same thing as copyrighting a fish.

There are so many problems with the argument that it’s hard to pick just one or two. But one of the most fun is to assume that the Joker has protection on his face and even the faces of the fish he created. So what?

Copyright is not a means to completely control or demand a license for every use of a work. It’s a set of exclusive rights. If a fisherman legally obtains the fish, which we have to assume they did because the Joker can’t take ownership of the fish by putting a copyrighted work on them, then what rights have they infringed upon by selling them?

They aren’t reproducing the work. Is the Joker arguing fish sandwiches are a derivative work? That doesn’t work because a fish sandwich would destroy the work, not create a derivative. Is he arguing it’s a public display or performance? Then every used CD or book shop is doing the same by displaying products for sale.

The first sale doctrine guarantees that you have the right to give away, sell or otherwise dispose of a legally-obtained copyrighted work.

In short, no fisherman, sushi chef or grocer would be breaking any element of copyright law.

To that end, many have argued that the Joker really meant either patent or trademark. That may be the case but, without a patent registration there isn’t much of a case to be had there (good luck getting one) and trademark would only apply if the resellers were doing something to cause confusion in the marketplace.

I don’t think any will be promoting their fake products as “Genuine Joker Fish” any time soon, even with the Joker’s commercials.

In short, there’s pretty much no way the Joker could have ever gotten those royalties he wanted. Even if the Gotham Copyright Office had granted his copyright, it would have been defeated at the first court challenge.

But, then again, it may not be wise to take legal advice from someone who has a second home in Arkham Asylum.

Rather, it’s that the show itself gives some pretty serious misconceptions about copyright. The most obvious being that there is a Gotham Copyright Office.

Copyright, in the United States, is solely a federal affair. There is only one copyright office in the country and, if you want to visit it, you’ll need to make a trip to Washington D.C.

However, that kind of talk is for a series about copyright in pop culture and I don’t think I’m ready to tackle that just yet.