(Note: All links in this article were tested to be SFW before publication but, obviously, use your own judgment.)

Only July 20th the much-anticipated conclusion to “The Dark Knight” trilogy, The Dark Knight Rises, will be released to theaters and it is widely-expected to be a major success. In the movie, Christopher Nolan’s Batman will do battle with Bane and Catwoman, two of the character’s best known villains.

More importantly though, it’s also clear that there has been an explosion in these movies in the past few years as studios have sought new ways to compete with both piracy and free online pornography.

But how do these salacious takes on modern films skate by without as much as lawsuit? The answer is fairly straightforward, fair use seems to protect them, even if many are unhappy about that.

Fair use was codified into U.S. law with the Copyright Act of 1978 but had been a part of case law well before that. Fair use, basically, is a set of exemptions under the law where someone could infringe upon the copyrights of another, but not be held liable.

Without getting too deep into how fair use is determined, parody is one of the most protected forms of speech under the law. The reason is that parody is the act of making fun of an already existing work and both the law and the courts recognize that, in order to “conjure” up a previous work to lampoon it, you have to use a large amount of it.

The protection of parody got another shot in the arm in the Supreme Court case Hustler Magazine and Larry C. Flynt, Petitioners v. Jerry Falwell, which ruled that parody was protected under the first amendment. That case was not a copyright case, but a defamation and intentional infliction of emotional distress one as Rev. Jerry Falwell sued the magazine over a parody ad that jokingly claimed Falwell had lost his virginity to his mother in an outhouse.

Trademark law also provides a pretty wide berth of protection for parody, but interestingly, for pornographic parodies, the nature of the films typically prevent a trademark case from surviving as the possibility of confusion is, generally, seen as small. This was, for example, cited by a judge as a possible reason for dismissing a lawsuit by the Dallas Cowboy Cheerleaders against the movie Debbie Does Dallas, even though the cheerleaders went on to win that case based largely upon the context of the use of the marks.

The combination of first amendment protection and wide fair use berth has given parody a lot of leeway under the law and that’s not just limited to pornography. Mainstream movies, such as those created by Mel Brooks, have often parodied other films and countless musicians, including Weird Al, have created parodies of mainstream music. 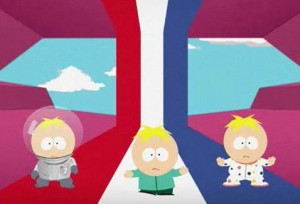 Earlier this month, the 7th Circuit Court of Appeals ruled on a case that pitted the TV show South Park against Brownmark Films, owners of the viral video entitled “What What in the Butt”, an outlandish music video that has gone viral on YouTube.

South Park hard parodied the video, largely recreating it but having it sung by and featuring Butters, one of the child characters on the show, instead of the original singer named Maxwell.

In this case, the court not only ruled that the use was a parody and a fair use, but ruled that it was a clear enough fair use that the case was to be dismissed at the summary judgment phase and that Brownmark should have to pay South Park’s legal bills for the case.

In short, the court came down as strongly as it could on the side of parody even though the only major change, other than animating the video, was the insertion of the new character.

In explaining its position, the court said that it was because South Park had made the video even more outrageous through its actions, something that was clearly an act of parody.

Seen through that lens, it’s easy to imagine how pornographic parodies could be seen as being more outrageous and outladish than the original, even if they don’t introduce a great deal of humor.

The two sides battled over copyright and trademark issues related to the two movies but, so far, no lawsuit has been filed.

A challenge on this issue is overdue, as Eriq Gardner said in the link above, and it may be coming sooner rather than later if these tensions continue.

All in all, pornographic parodies seem to be operating from a safe place legally though that won’t be certain until a legal challenge is filed and a conclusion is reached.

In the meantime, the parodies are doing everything they can to avoid litigation, including creative titles that try to avoid trademark issues, disclaimers in the movies and their trailers distancing themselves from the source and also injecting humor along with the sex and nudity.

Until then though, we won’t have any solid answers though we do have some very strong clues.