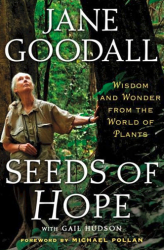 I haven’t spoken a great deal about the Jane Goodall plagiarism scandal. I have written two other articles for other sites already that touch on or cover the scandal, both of which should be live soon, but I’ve been oddly quiet about it here.

To briefly recap the scandal, in March, an article in the Washington Post detailed unattributed passages in Goodall’s new book “Seeds of Hope: Wisom and Wonderf From the World of Plants”. The Post found over a dozen passages and quotes that Goodall included in her book, presenting it as her own work and her own interviews, only to have the Post learn they first appeared elsewhere.

Goodall responded to the allegations by saying that she would work to correct the record in future editions and also talk about the problems on her blog. However, as of today, approximately two weeks after the initial discovery, no post has been made.

Michel Moynihan at The Daily Beast dug into the book deeper finding still more passages and issues that lacked proper attribution and also raised significant questions about the quality of the sources used in the book.

As the dust began to settle, Goodall’s publisher, Grand Central, delayed the book to fix the issues. Though Grand Central hasn’t said when the book will be released, they did say that, “We will work closely with Dr. Goodall to make sure the book deliversy on every level. We remain proud to be her publisher.”

Though I grew up a big fan of Jane Goodall and respect her career, which includes over 5 decades of work, the scandal itself isn’t what worries me. Instead, it’s the response to it, or rather, the lack thereof.

While I don’t necessarily think that what Goodall did should wipe out the good work she has done in her careers, it seems that many are letting her name and reputation dictate the conversation around her actions rather than the actions themselves.

This could, potentially, create a very dangerous precedent for the cases that will inevitably follow.

The issues start with the Post’s first article about the book. Though The Post cites a dozen instances of Goodall using passages from other sources, including quotes that she implied came from interviews she gave, it never once in the entire article used the word “Plagiarism”.

Instead, it used phrases like “Borrowed without attribution” and “content-copying” to name just a few. The article avoided using the word “plagiarism” with a dexterity that nearly belied the strain it must have taken to do so.

Others on the Internet and mainstream media have been much more direct. The Christian Science Monitor and MSN both called the incident plagiarism, but others have not or have done so only tepidly.

In fact, the Post, in its initial article, said that, “Questions of intent, haste, carelessness, number and length of echoed passages all come into play,” even as experts quoted in the article resoundingly said the copying was unacceptable.

When I look back to the early coverage of the Jonah Lehrer scandal, people were more willing to call his self-plagiarism (reuse of work he had previously written) plagiarism than they seem to be prepared to call Jane Goodall’s traditional plagiarism by what it is.

The soft reporting has left a lot of unanswered questions. Questions that, if we’re going to talk in detail about the scandal, we need to get answers to.

With the coverage so far and the fact that the book hasn’t been widely released (The Post had a review copy), there are a lot of unanswered questions that we aren’t going to get without a more aggressive media.

These are just some of the key questions but the point remains, we know surprisingly little about the nature of the plagiarism and, given that the book seems to be going through extensive revisions, it’s likely that the finished version won’t be representative at all of the issues in the original draft.

In short, we may never know just how serious the issue is and, even if it is severe, it’s likely that Goodall will continue on with little to no repercussions.

With the Jonah Lehrer case, in the beginning, there was an effort by his employers, most notably the New Yorker, to minimize the case and try to handle the matter through editor’s notes and limited corrections.

However, crowdsourcing was eventually a great deal of what brought Lehrer’s career down. As bloggers, readers and other journalists began to go through his tome of work, additional unethical acts, including more plagiarisms and fabrications, began to surface, eventually forcing him out of the jobs he held.

Unfortunately, there’s no way to crowdsource this particular task as the book is not widely distributed. We have to rely on the media that does have the book and they seem to be content to treat Goodall gingerly.

To be clear, it is understandable why newspapers might hesitate to come after Goodall hard on these matters. Not only is she well-loved and well-respected, but she is very popular among environmentalists and any attack on her might not just be seen as an affront to an idol, but a political attack as well.

However, Goodall’s prominence does not make her immune to these types of allegations, if justified. Likewise, it’s possible to question the nature of her work without destroying her reputation built up in the fifty years prior.

After all, if Martin Luther King Jr. can be widely known as a plagiarist today and still be heralded for the good he did during his life, so can Goodall and others.

Plagiarism doesn’t take place in a vacuum and plagiarist is rarely the only label that fits a person. We’re all complex people, but that doesn’t mean we should be able to avoid having our misdeeds looked at in the proper light.