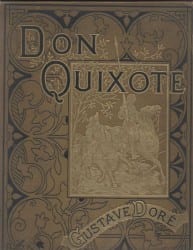 Don Quixote the much-beloved tale of a delusional middle aged man who fancies himself as a knight. He proceeds to go on a series of misadventures all in the name of a peasant woman, Dulcinea del Toboso, with whom he is madly in love.

Written by Miguel de Cervantes, it remains one of the best-loved books of all time even today.

However, in the ten years between the two, the popularity of the story had exploded and another author saw an opportunity.

In 1614 an author (or group of authors) writing under the name Alonso Fernández de Avellaneda published Second Book of the Ingenious Knight Don Quixote of La Mancha, an unauthorized and unofficial sequel to the first part. Sometimes referred to as the “False Quixote” (PDF), the book and its author have been the subject of much debate in the more than four centuries since.

However, Avellaneda’s story might have bene forgotten if not for Cervantes’ response. That’s because, when he published the official sequel the next year, he had more than a few choice words for the pretender to his throne.

Cervantes was in the middle of writing the second volume when the unofficial sequel was released.

Throughout the second volume Don Quixote meets characters who are aware of him from the publication of his first volume. However, in chapter 59, Don Quixote, the character, learns of Avellaneda’s book and is outraged by the way it portrays him.

From then on, the Avellaneda publication is ruthlessly mocked over the course of that book. He avoids going to a jousting tournament because such an event took place in the Avellaneda edition and, at another point, Don Quixote even meets a character from Avellaneda’s work, Don Alvaro Tarfe, and gets him to sign an affidavit that the two have never met before.

Cervantes also added a forward to his second volume where he directly addressed Avellaneda and suggested some rather unusual anecdotes the audience should pass along should they see him. It also addressed several accusations that Avellaneda made against Cervantes over the course of his work.

However, the overall impact of Cervantes’ response was that it actually placed Avellaneda’s work into the “real” Don Quixote story. While the stories Avellaneda told are not official, the work itself exists in the Don Quixote story, solely for the purpose of being mocked and debunked.

Whether or not this is the best way to handle such unauthorized fan fiction is up for debate, but it certainly was an unusual approach, both in 1615 and 2015.

The Impact of Avellaneda

The impact of Avellaneda’s creation is very difficult to gauge because there is a great deal that’s not known about him . We have no idea who Avellaneda was, some even believe it was Cervantes himself, and we don’t know his or her intent when publishing the work.

We also don’t really know what impact Avellaneda bad on Cervantes. Many feel that Cervantes may never have finished his second volume without the motivation provided by Avellaneda’s work. We also don’t know if Cervantes was truly upset or if he was merely playing along. Given that Don Quixote is a master work of satire, irony and parody, the truth will always be blurred.

However, one thing that is clear is Avellaneda’s version of the story is pretty widely panned, even today. Where the original Don Quixote is heralded as one of literature’s great masterpieces, the unauthorized sequel has largely been relegated to obscurity.

That obscurity might have been complete if not for Cervantes mentioning the work in his second volume. It’s certainly unlikely that we’d be talking about Avellaneda today without the mentions of his work in Don Quixote.

But, then again, Cervantes’ options were fairly limited. The Statute of Anne, the first modern copyright law, wouldn’t be signed for another century (and it would be signed in England, not Cervantes’ native Spain) and there was little to nothing that Cervantes could do to protect his creation from those who wanted to release unauthorized sequels.

Whether he was truly upset at Avellaneda or simply feigning it for the purpose of humor, Cervantes only option to fire back was within his creation or other works he published. So he did, for better or worse.

Are there any lessons in this story or was Cervantes himself chasing windmills?

That’s a tough questions to answer.

Cervantes wrote Don Quixote in a very different time. Not only was there no copyright law, but the nature of authorship was different.

Bear in mind, this was around the time Shakespeare was active and such unofficial sequels and prequels were actually commonplace.

In 2015, we have robust copyright protection, a definition of authorship that frowns upon unauthorized sequels, especially commercial ones, and much better tools for stopping such sequels.

This protection doesn’t just extend to unofficial sequels. It also applies to fan art and other works of fan fiction. While this pushes a lot of non-commercial activity into an “illegal but tolerated” gray area, it also provides tools for dealing with those like Avellaneda that seek to release unauthorized, commercial sequels.

But Cervantes certainly showed a great deal of creativity in his response and, given that we are entering an age of individual and international publication at the push of a button, a little creativity (and a little humor) might not be a bad thing.

However, we do know how Cervantes responded and that unusual response both enshrined Avellaneda into the canon of Don Quixote, but also made it a perpetual object of ridicule.

If Cervantes wished to eliminate Avellaneda from the history books, he failed. However, if he had intended to ensure that it would never supplant his creation, he succeeded.

But then again, Avellaneda was probably never a threat to Cervantes’ legacy, not that it may have been easy to see at the time. But much like the story’s titular character, we may never know how much of Cervantes’ quest was success, futility and/or parody.

It’s the nature of Cervantes’ work that we may never know what’s serious and what is serious commentary. That’s part of what makes Don Quixote the classic that it is.