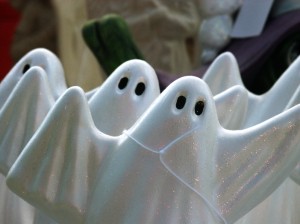 Ghostwriting is one of the most controversial and divisive issues of ethics when it comes to plagiarism and attribution. It’s an activity that is widely accepted in some arenas and seen a as a grave ethical misstep in others.

This was highlighted in a recent article on Inside Higher Ed by Jane Robbins, who was responding to a reader question regarding the ethics of a college president who turns to ghostwriters for his book chapters and academic papers.

While I disagree with Robbins definition of plagiarism, the thesis of the article is perfectly valid, that whether or not ghostwriting is an offense depends heavily on a variety of factors, most importantly the audience’s expectations and the importance of authorship to the piece.

The result is that, while plagiarism without permission is almost always treated as unethical, ghostwriting literally run the gamut between being completely acceptable and one of the worst offenses imaginable.

It all depends on the environment and the context.

A Subset of Plagiarism

One area I do disagree with Robbins is that she treats ghostwriting as a separate act from plagiarism.

Plagiarism, generally, is defined as presenting the words, ideas or work of another as your own, without attribution. By that standard, ghostwriting, is clearly a type of plagiarism, just one that’s done with permission.

But the definition of plagiarism has an added wrinkle, that the content use has to be outside of the acceptable boundaries for the work. For example, a lawyer drafting a motion will almost certainly copy large amounts of text, without citation, from other works. However, no one considers that plagiarism because it’s not just part of how the legal field works, it’s a requirement.

Ghostwriting is in much the same boat. Ethically, it is considered acceptable for a politician to use a speechwriter and does not attribute them. However, a student who turns to an essay mill for an assignment is a clear plagiarist.

The key difference, as Robbins pointed out, is the expectations of the audience and how much the work depends upon the integrity of the authorship.

A memoir may not depend heavily on the exact authorship of the piece, as long as the information is accurate, but a research paper does because of conflict of interest and other potential issues.

The result is that ghostwriting is neither universally decried or universally accepted, it’s very situational and extremely difficult to draft policies either for or against.

Dealing (or Not Dealing) with Ghostwriting

Going back to our previous examples, ghostwriting is perfectly acceptable for politicians giving speeches but, on the other end of the spectrum, it’s the worst kind of plagiarism when a student turns to an essay mill. However, there are exceptions even to those already narrow rules.

For example, a ghostwritten political speech is fine if it’s a paid member of the staff who wrote a speech representing the politicians views. But, that same speech becomes an ethical problem and a plagiarism if it’s discovered to have been written by a lobbyist or industry group.

On the other hand, while the student in the classroom most certainly can not turn to an essay mill to write a paper for them, they can certainly turn to others to help edit, revise and improve their work, with many schools providing such services to their student. The line between editor and ghostwriter, at times, can be very thin and some editors are often over-aggressive and do more writing than correcting.

This creates a very serious problem: Deciding where the boundaries of ghostwriting really lie. If industry-specific guidelines aren’t the end of it, what is?

The answer, to me, seems to require a two-part test:

If the use of the ghostwriter is in an industry that accepts ghostwriting as a practice, is not hiding anything of importance to the audience and still represents the named author, then there likely isn’t anything wrong with it. Outside of those boundaries, ghostwriting becomes a form of plagiarism and a serious ethical issue.

It’s not a simple rule and not a guideline that fits neatly in an ethics guide or even a 1,000 word article about ghostwriting, but it’s at least closer to the truth.

The ethics around ghostwriting will continue to divide and confuse, there’s no way around it. If anything, this problem is going to grow not only because the Web has made us more dependent on writing a form of communication, but because the Internet has made it easier than ever for individuals to connect with and hire potential ghostwriters.

Ghostwriting and self-plagiarism/recycling are the two big elephants in the room when it comes to attribution issues and now is the best time to be looking at them. Neither are going to be getting any better or going away. It’s best to address them now rather than hoping for the best later.