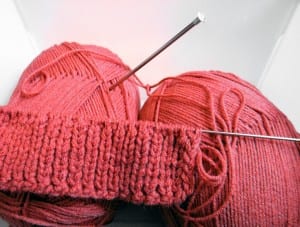 Disclosure: I am not a knitter/crocheter. Though many of my loved ones are and I turned to them for help writing this story, I obviously don’t know as much as those who participate in it. As such, mistakes may be made and corrections will be posted as needed.

Crafts, like knitting and crocheting, typically are a fun way to pass the time while making something for yourself or others. However, they are also creative outlets and a form of self-expression.

While this makes the craft all the more enjoyable, it also means that as forms of creativity fixed into a tangible medium of expression, they are also, potentially at least, subject to copyright issues.

While one doesn’t often think about copyright and these forms of crafts, as communities around these activities have grown online, so have the copyright issues within them.

Simply put, as with movies, music and other copyrighted works, it’s become easier than ever to share, illegally and legally, many of the components of these arts. As such, questions and challenges to the copyright of these works have become more common.

To help with that, we’re going to take a quick look at the common copyright issues faced by these crafts and what creators should be on the lookout for, both so they can protect their work and ensure that they don’t infringe upon someone else.

Copyright in Knitting and Crocheting Patterns

Knitting and crocheting typically involves a printed pattern that is then used by the person who purchased or obtained it to create the actual crocheted/knitted work.

In that regard, patterns are a great deal like recipes, which also typically contain a mix of images, descriptive text and instructions. According to the U.S. Copyright Office, recipes that are merely lists of ingredients and formulas do not qualify for copyright protection. However, such protection does expand to other areas of the recipe, including descriptive text.

So it would stand to reason that the raw instructions in a knitting pattern, though not the descriptive text and images, would not be subject to copyright. This viewpoint is supported by Circular 31 of the U.S. Copyright Office, which says copyright is not available for “procedures for doing, making or building things.”

However, the U.S. Copyright Office has also included knitting and crochet patterns in its list “Works of Visual Arts” indicating that the patterns may qualify for copyright protection as a visual work.

Either way, it’s best to assume that the pattern itself is copyrighted. Even under the most favorable interpretation, elements of the pattern are copyrightable. This means you can not copy, share, download or publicly display the pattern without permission. This includes whether the pattern is free or paid for.

Still, the end product does create its own set of questions, none of which have easy answers.

Copyright and the Final Product 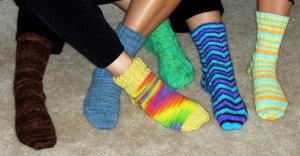 Copyright law and the Copyright Office are very clear on one issue: Copyright does not extend to useful articles. This includes clothes, blankets, curtains, pot holders or other common creations of knitting and crocheting.

That being said, copyright can extend to non-useful creative expressions that are affixed to a useful article. For example, copyright can protect a photo printed on a shirt, but not the shirt itself.

With knitting, this means that it is theoretically possible for a pattern to be creative enough and independent enough from the article’s useful function to qualify for protection. However, in most cases, such a protection is unlikely and would only extend to the creative elements, not to the techniques that make it.

But with knitting and crocheting comes a different question. While it’s assumed that you are allowed to use your legally-acquired pattern make a product for your personal use, many want to sell their work. However, many knitting patterns have disclaimers and warnings that say such behavior is prohibited.

Most lawyers, however, say that this argument is false. However, as has been repeatedly pointed out, there is effectively no relevant precedent on the matter.

The most commonly cited case, Baker v. Selden, is from 1879, meaning it predates both the 1908 and 1972 copyright acts, and deals with two similar sets of accounting books, not knitting or crochet patterns. While it’s a commonly cited case dealing with the separation between ideas and expression in copyright law, it is far from a modern and directly-relevant case.

The truth is that, despite the disclaimers, no publisher has filed a suit and taken it all the way to a trial. There is no precedent on this matter that I or others have been able to find and most experts seem to feel that publisher arguments would be dubious.

Still, if you are a knitter and are interested in reselling your creations, it’s likely best to avoid patterns that have such disclaimers or, even better, expressly allow such use. Not only does this prevent you from facing a possible lawsuit, even if you can win, a lawsuit is an unpleasant experience best avoided, but it discourages publishers from putting such limitations on their patterns.

In short, while there hasn’t been any precedent and most publishers don’t even both to register the copyright in their patterns, meaning a lawsuit is more or less impossible, no one wants to be the test case if they can avoid it. Besides, even without a lawsuit, publishers can file DMCA takedown notices if works are sold online and send threat letters over any detected use.

While not as serious of a headache as a lawsuit, very few want to deal with those either.

The role copyright plays in knitting and crocheting is bizarre. While the law almost certainly does apply to patterns and to some of the created works, lawsuits, litigation and even serious threats are fairly rare, especially when compared to other types of works.

In fact, most of the copyright challenges to knitting focus not on knitters infringing one another, but rather, knitters allegedly infringing other works. For example, in 2008, the BBC targeted knitters that were making their own versions of Doctor Who characters without a license.

Still, the Internet has brought these issues to something of a head. Not only are there knitting and crocheting communities that bring people together who enjoy those arts, there are sites like Etsy where people often sell finished products and Patternfish for patterns.

As more and more people get involved in the commercial side of these crafts, more battles are going to arise.

Hopefully though, it won’t be you or anyone you know in the crosshairs of such a fight.