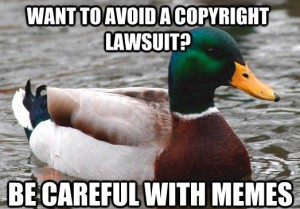 The definition of the world “meme”, in the broadest sense, is “An idea, behavior, style or usage that spreads from person to person within a culture”. Internet memes are a subset of that behavior that takes place online, where people spread a cultural touchstone from person to person, often referred to as going “viral”.

But what is and is not a meme can be tough to define. After all, a meme can be almost anything including a hashtag on Twitter, a photo with changing user-generated captions and even a short video a cat pretending to play a keyboard.

All that’s required is that a cultural item be spread from person to person rather than some soft of central source.

However, this spread of content creates a series of difficult questions with regards to copyright. Though it’s easy to think of memes as being owned by no one, rather a creation shared by the Internet, the law often thinks different as many memes do qualify for copyright protection and were, at some point, created by someone who holds that copyright.

These issues are likely going to grow as memes grow in importance commercially. This was illustrated recently by a lawsuit filed against Warner Brothers and game developer 5th Cell. In the lawsuit, Charles Schmidt, the creator of the Keyboard Cat meme and Christopher Orlando Torres, creator of the Nyan Cat meme, claim that their works were unlawfully used in various Scribblenauts games and are seeking damages for trademark and copyright infringement.

Though the likelihood of success of that lawsuit is up for debate, it is clear that this will not be the last time copyright and memes cross paths.

However, that doesn’t mean that the party has to end…

Why There’s a Problem At All

To be clear, many, if not most, memes don’t raise any significant copyright issues at all.

Many things that are considered memes, such as some catchphrases or tags, don’t qualify for copyright protection to start with. Other memes, such as stills from movies used in humorous ways or very short news clips from movies or news reports, are likely fair uses (in the United States at least).

The problem arises with memes, like Keyboard Cat and Nyan Cat, that are more or less original works that were used in whole (or near whole). Those uses, at least potentially, could be copyright infringing.

But even then there are rarely issues as most creators are happy about their newfound meme status and don’t object to non-commercial use of their work. This was a point that Schmidt drove home in a recent interview he gave on Kotaku.

But as memes grow in cultural significance, they are also becoming more commercially significant. For example, Schmidt also runs an official Keyboard Cat store and Nyan Cat has spawned a similar store, complete with mobile apps.

This commercial success also brings in the interest of companies that may want to use memes in their promotional materials or products. Whether it’s meme stars making an appearance in a music video, memes being referenced in a commercial or, in the case of the lawsuit, memes appearing in a video game without permission, companies are wanting to seize on the commercial value of memes.

But as lawyer Scott J. Slavick pointed out in November, this is dangerous territory. Not only are many memes protected by copyright, but some are also protected by trademark and others, those that feature people, may also have publicity rights issues.

Clearing these issues, especially in a timely manner, can be nearly impossible. This makes memes a risky area for commercialization but, for some companies, the risk seems to be worth the reward.

To be completely clear, any use of a copyrighted work beyond a fair use is an infringement and could, theoretically, result in a lawsuit. This includes non-commercial uses of memes.

However, the truth is that such a lawsuit is highly unlikely. New Line Cinema (nor the estate of JRR Tolkien) are not likely to sue you over posting a Boromir meme on your Facebook wall.

Even if they could effectively control non-commercial uses of the meme, it would likely be unlawful (stopping fair uses of the work) and would do little good. Some meme owners may file takedown notices, but even that seems to be a rarity (though there are exceptions).

However, the legal and practical realities of commercial use make it much different. Not only is the use less likely to be a fair one, but commercial uses are fewer in number, seen by copyright holders as being more damaging and companies generally make better targets for lawsuits.

In short, Slavick’s advice above is quite appropriate. Companies looking to incorporate memes need to be careful of all of the various rights that could be involved, not just copyright, and weigh carefully versus their planned use.

It may simply be that, while memes can be a playground for non-commercial users, companies may want to stay away, at least for now.

What’s interesting about the Scribblenauts lawsuit isn’t just the legal issue, but the public’s reaction to the suit, which has been very negative toward the meme creators.

Though there’s no doubt that Scribblenauts is a for-profit game, thus making the use a commercial one, it feels different to most people than if someone had started printing bootleg t-shirts or DVDs of the the two memes.

The inclusion of the memes in a game as hidden characters, in particular a game that has the premise of letting the user create anything they want, seems more in keeping with the spirit of the meme than an exploitation of it.

Still, it’s an issue for the courts to decide now but it won’t be the last time a meme creator sues over their work. Memes are rapidly becoming big business and where copyrighted works and money collide, lawsuits are almost inevitable.

Though it’s easy and tempting to think of viral content as something that’s “part of the Web” or “owned by everyone”, every meme started somewhere and that creator, if the work qualifies for copyright protection, has rights in it. Whether he or she chooses to enforce those rights is another matter.

For better or worse, memes are not immune to the copyright skirmishes that have defined the Web and, increasingly, could be a key part of the battles to come.