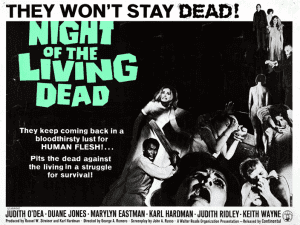 Even if you aren’t a horror movie fan or have never seen a zombie film, you’ve probably at least heard of “The Night of the Living Dead”. It serves as the seminal modern zombie flick and a movie that, single-handedly, changed horror movies forever.

Prior to the release of the film in 1968, “zombie” movies focused on “voodoo zombies”, which meant living victims that were turned into slaves by supernatural forces. “White Zombie”, released in 1932, is perhaps the best-known example of that genre.

Night of the Living Dead changed that by rebranding the zombie into a undead killer that hungers for human flesh (or brains). It also established much of the lore that surrounds modern zombies, such as the idea of having to destroy the brain of a zombie to kill it, zombies being afraid of fire and so forth. This, to most horror buffs, is known as the “Romero Zombie” or the “Slow Zombie”

Nearly every zombie movie since 1968 owes its roots to Night of the Living Dead, even those that deviate from the formula. However, that might not have been the case if not for a screw up with the copyright of the original film that caused the movie to be released into the public domain.

As such, copyright, or the lack thereof, played a tremendous role in the development of the modern zombie film, helping to ensure that the dead can keep rising in film after film.

Copyright and Night of the Living Dead 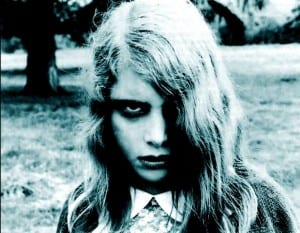 The first prints of “Night of the Living Dead” didn’t use the title we know it as today. Instead, it referred to the movie as “Night of the Flesh Eaters”, one of the working titles of the movie. However, before release, the title was changed to its more familiar version but, when changing the title card, the distributor forgot to put the copyright notice on the final print.

Though that would not be a large issue today (the Copyright Act of 1976 removed all notice requirements), in 1968 that meant the movie was not protected by copyright and, instead, was placed immediately into the public domain.

As a result, reports say that George Romero, the movies co-writer and director, saw little to no money from the film, despite it grossing some over $30 million at the box office (some estimates as high as $42 million).

The distributor, allegedly the company that made the mistake, kept all of the money.

However, there was one element that had to be addressed first: His co-writer, John Russo. 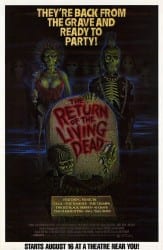 Though “Night of the Living Dead” is most commonly associated with George Romero (who both wrote most of the script and directed it), it was actually a collaboration between him and John Russo, who co-wrote the script.

After “Night of the Living Dead” was released the two began to talk about the process of writing a sequel. However, creative differences arose between the two as they each wanted to go with a very different direction for the next movie(s).

Since the movie was in the public domain and both were legitimately writers of the first film, they both agreed to go their own way with it and create two separate series carrying. Russo retained the rights to the “Living Dead” monkier and Romero would go on to use “of the Dead” in his films.

Russo initially wrote “Return of the Living Dead” as a more direct sequel but, after he teamed up with director Dan O’Bannon, the story was rewritten drastically to differentiate it more from Romero’s series, which had already been going on for some time. The resulting movie treated “Night of the Living Dead” not as a true event, but as a movie based on a real event, namely a military experiment gone wrong, and follows the plot years after that incident.

Russo’s movies differed greatly from Romero’s in more than just their treatment of the source material. Where Romero’s films were more serious and also intended as social commentary, in particular on consumerism and capitalism, Russo’s films, in particular the first one, were much more slapstick and humorous.

The “Return” series also had a very different zombie type. The chemical that reanimates the dead in them reanimates all living tissue so simply destroying a zombie brain does not kill it. In fact, the plague in “Return of the Living Dead” begins after a zombie is incinerated in a crematorium and its ashes rain down on the town, infecting it. Until much later in the series, “Return” zombies can only be contained.

But while both zombie types and both series are well-known and well-loved by horror movie buffs, the Romero zombies became the canon for most zombie movies and their influence can be found all over the entire genre. 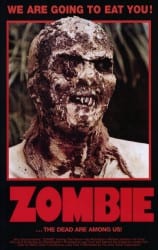 In addition to the Romero and Russo movies, “Night of the Living Dead” spawned a series of unofficial sequels and remakes, too numerous to name, and each treated the source material differently.

However many of the rules of the Romero zombie remained in effect for most of these films, in particular the notion of destroying the brain being the only way to kill a zombie.

With the original in the public domain, this was completely legal. Compare that to Superman, where the estate of Jerome Siegel, Joseph Shuster and DC Comics are wrangling over which aspects of Superman’s characters belong to each of them, the “rules” of a Romero zombie were placed into the public domain immediately.

Without that readily-available canon, many of the works that came after could have been considered “derivative works” or, at the very least, faced lengthy legal battles about what elements were and were not copyrightable.

However, the references go well beyond that merely borrowing the rules. Many movies either referenced scenes from “Night of the Living Dead” or films that used footage directly from its predecessor, often on TVs playing in the background.

All in all, hundreds of zombie movies have been made that built upon “Night of the Living Dead” in one way or another, ranging from low-budget films to blockbusters. Even many video games such as the “Resident Evil” series (and subsequent movies) also owe a great deal to it.

This says nothing about the books, songs, costumes, paintings, and millions of other creative works based, in some way, on the Romero zombie.

Even though Romero, without a doubt, missed out on a lot of money due to the copyright mishap with “Night of the Living Dead”, the story ends well for him. The popularity of the film enabled him not only to create a successful series of sequels that he retained copyright in, but also other opportunities to exploit his notoriety, including books, comics and more.

For the zombie movie industry, however, the lapse of “Night of the Living Dead” into the public domain turned out to be a boon. With a well-understood set of clear-cut rules, others were able to build on and expand on the work without paying a licensing fee or fear of being sued. This helped grow the genre, especially during the long wait between “official” sequels.

The popularity of the genre likely helped Romero (and Russo) as they were the “official” heads of the zombie empire.

While this certainly wouldn’t work for every film or creative work out there, it was, in a way, a “happy accident” that “Night of the Living Dead” slipped into the public domain. Not only does it mean we can download it legally online for free, but it also means that a robust genre formed around a familiar set of rules.

In short, copyright, or the lack of it, helped define the zombie genre for what it is and ensure that there were plenty of movies to go around.