Note: Due to the nature of this article, there is some coarse and offensive language below. While there’s nothing overtly graphic, it’s still more vulgar than a normal post on this site.

But for all of the controversy around the act, the vast majority of people participating it are doing so in good faith. This includes hosts that are working to remove content and DMCA filers seeking to get infringing material removed.

Though false DMCA notices generate headlines, they are rare. Most cases of incorrect DMCA notices deal not with malicious attacks, but cases of mistaken identity errors in sending or disputes over fair use. While that doesn’t alter the harm they can do, it at least shows most people are trying to be good actors when using it.

But, there are exceptions to every rule and, last week, we ran into one such case. In this case, the individual not only knowingly filed a false DMCA takedown on a YouTube video, but admitted after the fact and even hinted that he was going to do it before he he did it.

It’s a very bizarre story but is one that’s well worth analyzing from both a copyright and an ethical perspective.

The Case of the Super Seducer DMCA Takedown 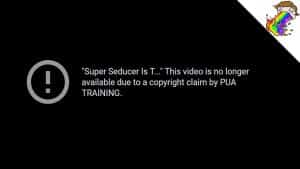 Super Seducer is a dating simulator/instructional game launching on Steam and PS4 today. Created by Richard La Ruina, who claims to be the world’s top dating guru, it’s a game that aims to teach men how to talk to and pick up women.

Obviously the subject matter of the game was going to up it up to ridicule, especially in the current climate. As such, when La Ruina’s PR department handed out review keys to the game to YouTube reviewers, many lampooned the game including VideoGameDunkey and ProJared among others.

One of those users was IamPattyJack (real name Chris Hodgkinson), a reviewer who operates a smaller channel with about 17,000 subscribers. Hodgkinson included the game in his series entitled “_____ is the Worst Game Ever”. In his video Hodgkinson criticized not just the gameplay and the videos it was based on, but the questionable advice given.

La Ruina, at a time where the video had barely 100 views, took to the comments both to fire back at some of the points Hodgkinson had to say.

The fight spilled off on Twitter where La Ruina took still more shots at Hodgkinson (tweet now deleted, image below from Hodgkinson).

Hodgkinson, for his part, fired back on Twitter warning other reviewers that, if they trashed the game on YouTube, La Ruina was likely to attack them too…

La Ruina then responded saying that his objection was the game being called the “worst game ever”.

No, I talked shit because you called it "worst game ever". There are people who had negative things to say and I left them positive comments. They didn't make a video with a title like that that will sit there forever.

Hodgkinson responded again, this time reminding La Ruina that he (or his PR department) had sent him a review code for the game despite the fact he had a series entitled “_____ is the Worst Game Ever.”

At this point La Ruina apologized to Hodgkinson and admitted that he was being “pretty dumb”.

Yes that is actually pretty dumb isn't it. lol
Sorry for talking shit then, you were just doing your usual thing.

If the story had ended here, there wouldn’t have been much interest in it. Disagreements happen online all the time and, this would have been fairly unremarkable.

However, when another Twitter user applauded La Ruina for doing the right thing and apologizing instead of filing a false DMCA request, La Ruina responded by remembering his “DMCA subscription.”

ah yeah we have our DMCA subscription! I forgot about it. nice one dude.

I decided not to, I believe in freedom and democracy and that american stuff. We only DMCA when people rip our products.

Hodgkinson then tweeted one final time, saying that La Ruina really wanted to, but had learned his lesson of other developers who had done something similar.

La Ruina, however, had obviously not learned those lessons. Shortly after that, he filed a DMCA takedown notice with YouTube that resulted in Hodgkinson’s review being removed from the site.

Hodgkinson learned about this not because of an email from YouTube, but an email he received from La Ruina’s PR department apologizing for the DMCA notice. The email not only said that they had already filed a retraction of the notice but also offered to pay any money lost due to demonetization of the video.

Hodgkinson, in his video on the topic, said that, due to the size of his channel, that lost revenue would be significantly less than a dollar.

Despite the swift response from La Ruina’s people, the internet did not take the issue lightly. Polygon covered the takedown on their site as did GameRevolution as well as YouTubers such as Jim Sterling.

As for why he did it, La Ruina sent a series of direct messages to Hodgkinson via Twitter that said the following (Images from Hodgkinson): 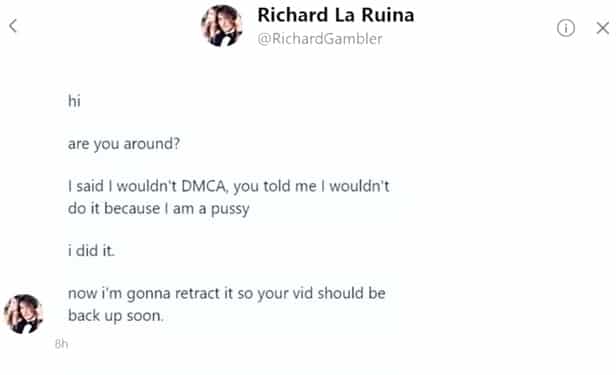 In the end, the video was restored and, if you wish to see it, I’ve embedded it below.

What Does the Law Say?

With the whole mess seemingly resolved, it gets difficult to autopsy what happened because it’s difficult to know just where to begin.

However, as with many things, the law is as good a place to start as any.

To that end, the law is pretty clear. When you send a DMCA notice you aren’t simply pointing out an infringing piece of content, you’re filing a notice, under the penalty of perjury and lying while filing such a notice can carry consequences.

Section 512(f) of the copyright act covers misrepresentation under the DMCA. It reads as follows:

Basically, what it says is that knowingly misrepresenting anything when filing a DMCA notice (or counternotice) opens you up to damages, attorneys fees and other costs. Those damages can be significant. Diebold, for example, was ordered to pay $125,000 to cover attorney’s fees when it sent a false DMCA over leaked memos.

However, the challenge in these cases is usually proving that the filer of the false DMCA notice did so knowingly. As we saw in the Michael Crook case and are seeing in the Lenz v. Universal “Dancing Baby” case, proving that someone knew they were wrong or acting so recklessly that they should have known they were wrong is difficult.

However, this case is a strange exception. La Ruina not only knew Hodgkinson had a license, but admitted that copyright wasn’t the reason he filed the notice both before and after filing the notice. Best of all, he either posted about that knowledge publicly or sent it directly to Hodgkinso himself.

In short, this is a rare case where someone is not only malicious enough to file a false DMCA notice but foolish enough to actually admit doing it in writing. Though La Ruina sent Hodgkinson $50 via PayPal, it doesn’t constitute a settlement and could be further evidence against La Ruina if this matter did go to court.

However, court is not a likely destination for this case. No matter how clear the evidence is, the video is already back online and Hodgkinson, by his own admission, suffered no real financial harm. A lawsuit just wouldn’t be practical.

This is highlighted by the Lenz v. Universal case, where the 9th Circuit ruled Lenz can only collect nominal damages and a small fraction of her attorneys fees, specifically the advice she received before filing the lawsuit. This is because she wasn’t financially harmed by the removal and the video was restored before she filed the lawsuit.

But, even if no lawsuit is forthcoming, it’s still a hall-of-fame calibre example of DMCA misuse that will likely have strong impacts on the DMCA landscape.

The Ethics and Other Implications

Ethically, La Ruina should have left things alone from the beginning. Yes, Hodgkinson’s review was negative but to get in a fight over a negative review, especially one on a relatively small YouTube channel, is not just childish but a waste of energy.

However, to let that battle escalate to the point that you file a false DMCA notice and openly acknowledge that you know it’s false is beyond the pale. It’s an overreaction that not only violates basic ethics, but makes La Ruina appear thin skinned.

But the strangest part of this is that La Ruina’s profession hinges entirely on his ability to predict how other people (specifically women) will react to what he does and says.  Yet, he read this situation 100% wrong.

And this was after La Ruina was directly warned about precisely those consequences. Hodgkinson directly referenced Digital Homicide, who used improper DMCA takedowns against YouTuber Jim Sterling and ended up not only losing their case but having their company “destroyed”.

While La Ruina will, almost certainly, escape this situation much better (in large part because didn’t follow the DMCA notice with aggressive lawsuits), this outcome was predictable to anyone who follows these issues or simply understands human nature.

It seems the only one who didn’t see it coming was the person who claims to be able to predict how people will react.

To give La Ruina some credit, he has admitted that his actions were “childish” and has made it clear that it not his policy to DMCA negative reviews. Has has not taken action against any other negative reviewer and has even retweeted some of them.

I can understand a negative review getting under your skin, it hurts to have things you’ve worked on not be universally loved. Still, this response isn’t just childish, it’s dangerous.

It’s dangerous not just to reviewers and those covering other people’s work, it’s dangerous to rightsholders, including La Ruina himself.

When the topic of copyright and DMCA reform comes up, examples such as this one are pointed to as proof that any tightening of enforcement is dangerous. Furthermore, cases such as this are why hosts often drag their feet when working with creators on copyright issues.

La Ruina’s actions have consequences not just for himself and Hodgkinson, but for everyone on the internet. While he may not face any major consequences from this due to the way the current law is written and the nature of the situation, many already want to see changes to the law so he (and others like him) would.

Fortunatley, La Ruina is still an outlier when it comes to the DMCA. But outliers often have a major impact on both public perception and policy, something La Ruina may not have taken into account.