Previously, we took a look at the chaos that enveloped YouTube as dueling controversies consumed the site.

First, there was the suspending, limiting and even deletion of prominent YouTube accounts over minor alleged infractions, second was The Fine Brothers attempting to trademark the “React” brand name coupled with some questionable copyright takedowns on their behalf.

But with YouTube seemingly sorting out the algorithm problem that created havoc for the legitimate accounts and The Fine Brothers rescinding their trademark applications, it seemed like things should have gotten a great deal quieter.

YouTube has once again become awash in copyright drama as members of the react community, some of which previously took umbrage with The Fine Brothers trademark, have found themselves accused of stealing content from other YouTubers.

To understand what’s going on we first have to look learn more about the reaction video format and why some YouTube creators are objecting to it.

The current battle focuses on a dispute between two YouTube users, GradeAUnderA, who does rant videos, and Tyrone Mangus, who specializes in reaction videos.

The dispute centers around a now-deleted video uploaded by Mangus where he “reacted” to one of GradeA’s works. According to GradeAUnderA, the video included his full 16 minute original video as a picture-in-picture while Mangnus reacted to it in the main screen.

Mangus, over the course of the entire video, only said seven words: “Oh shit, this is a long video.”

This prompted GradeA to file a third party content claim, which prevented Magnus from monetizing the video. Sometime after the claim was filed, the video was removed.

Magnus released his own react video to GradeA’s, where he took issue with some of GradeA’s allegations, but the key facts seem to be consistent, namely the nature of the original video, the fact it was claimed, that it was then removed and the fact there is a dispute over it.

That controversy has ignited a war of words and videos on YouTube and the war has called into question an entire genre of YouTube videos, reaction videos. 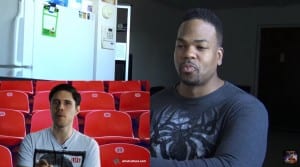 Reaction videos are a very broad category of videos. Any video that focuses heavily on how people react to something, whether it’s a video, a song or even a physical object, can be considered a reaction video.

This was one of the reasons The Fine Brothers’ trademark move was so controversial. Their particular style of reaction videos isn’t unique to them nor is it indicative of the entire field. The result, many were worried that the duo would lay claim to a wide swath of content, much of it very unlike what The Fine Brothers post.

The copyright issue centers around a particular kind of reaction video. These videos show commentators reacting to another video. They video they are reacting to plays, often in full, either in the background via green screen or as a picture-in-picture.

These original videos come from a variety of sources including movie trailers, TV clips and, in the case of the video at issue, from other YouTube channels.

It’s that use of videos by fellow YouTubers that have pit YouTuber against YouTuber, with many of the biggest names such as (pulling from GradeA’s video) PewDiePie, M3RKMUS1C, emmablackery and Jackfilms all decrying them.

All of this has led to one question: Are these reaction videos fair use?

The answer is simple: Probably not.

The Fair Use Question

For a disclaimer, it’s impossible for me, or anyone else, to say definitively what is or is not a fair use. Only judges and/or juries can have final say and, even then, if the issue is gray enough, it might not be settled until you hear from multiple courts or even the Supreme Court.

Despite this, there’s an obvious disagreement about whether such reaction videos are a fair use. Both sides have heavily cited the four fair use factors, which include:

The original creators, however, point to the fact that their entire video is featured in the reaction video and that a user could just as easily watch the reaction version instead of their original. They note reaction videos are often done for commercial gain.

Because of the gray area that is fair use, both sides are at an impasse, each convinced they are completely right.

However, if I were a reaction YouTuber, I, at the very least, would not be so certain.

These are admittedly just two examples plucked from the Copyright Office’s Fair Use Index. But these are the most directly relevant audiovisual cases I was able to find. In both of these cases, defendants with far more favorable fair use factors lost and were found to be infringing.

In short, it stands to reason that, if these plaintiffs could lose, then reaction YouTubers featuring full videos should at least be worried, even if there are other cases that support the argument.

But even if we set aside the issue of fair use and assume that it favors the reaction channels, the question then becomes “What is the harm in getting permission?”

To be clear, fair use doesn’t require permission, but there’s also something to be said for being a part of a larger community and cooperating with your colleagues.

Parody artist Weird Al Yankovic probably doesn’t need permission to do his parodies because he is creating a wholly new work and parody is strongly protected, but he does so for every song. (Note: Parody is typically defined as “distorted imitation“, meaning adding commentary to something does not make it a parody, even if the commentary is funny).

Asking permission takes effort but it builds strong connections and creates allies instead of enemies. Even when someone says no, they will probably respect that you asked and support you in your endeavors. At the very least, they won’t be angry.

In short, asking permission builds bridges where taking without permission risks burning them, even if it is legal to do so. Sure, there are times where going it alone is necessary because permission might be impossible for one reason or another (such as with negative reviews), but the objection to reaction videos centers more around how the content is used rather than the content of the commentary, indicating that others might gladly agree to be a part of reaction videos.

If I Were to Launch a YouTube Reaction Channel…

Though I’m not a lawyer and can not give legal advice, the whole issue has got me thinking about how I would approach launching a reaction channel legally and ethically. Here are the guidelines I came up with for myself.

In short, it’s very possible to make a reaction channel that plays nice with copyright. It requires a bit more work and takes on a different feel, but many channels do exactly this and do very well for themselves.

I said in my previous article that YouTube was at a crossroads. YouTube has gone from being sued by big media companies to being a big media company in its own right. The next major copyright lawsuit might not feature YouTube or one of its users as a defendant, but as a plaintiff.

This transition is coming with a lot of headaches and heartburn. From freebooting on Facebook, to the trademark controversies of The Fine Brothers, to an abuse system based on algorithms rather than people, YouTube and its users have a hard road ahead of them.

Part of that challenge is that YouTubers are seeing the value of their content and feeling the sting of infringement but they lack the tools and resources of major media companies to fight back. Even copyright enforcement services such as my own are out of reach for many who are struggling to get by.

This is the nature of the struggle. Middle class individual content creators battling the same issues that large media companies have struggled to handle. The only way to fight back is as a community and, for that to happen, it can’t be divided like it is right now.

At this point, the only thing that can sink YouTube is YouTube and its users. If these past few weeks are any indication, there’s a very real danger of that happening.