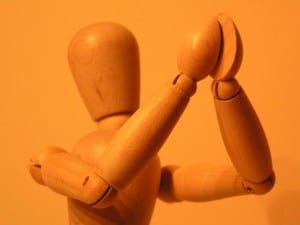 Plagiarism apologies have run the gamut from bad, to book-length bad, to combative and even outright offensive. And that’s without looking at Shia LaBeouf.

Time and time again, plagiarists have been caught and offered up apologies that are halfhearted, incomplete and, at times, downright patronizing. While one might expect that plagiarists would not be creative at offering apologies, one would think that they could at least offer a complete one.

Last year, I did an analysis of three different plagiarism apologies, finding all of them to be sub-par and incomplete.

So, I’ve decided to turn things around and offer plagiarists a helping hand. If you’re caught plagiarizing and need a plagiarism apology letter, I’m providing you a starting point below.

So, if you find yourself in the need of a good plagiarism apology letter, feel free to use this one as a starting point. Just be sure to attribute it if you do use it. You don’t want to be Shia LaBeouf.

(Note: This letter is licensed under a Creative Commons BY-SA license. You are free to use it, including editing it, as long as you comply with the terms of the license.)

To Whom it May Concern,

My name is (Name). It was recently discovered that on (Date) that I had (Describe Plagiarism).

This was an act of plagiarism. Though I wish I could claim this were an error on my part, I knew at the time that what I was doing was wrong. I then continued to cover up the plagiarism and take no action to correct the record in the time after I did it. The only failing was in my ethical judgment and, for that, all I can do is apologize.

I wish to first apologize to those I copied from (Identify by name if possible). It was wrong of me to use your work without permission and attribution. Your efforts deserve the recognition that I denied it. I recognize that this is likely hurtful for you, seeing your work misused in such a way and I am deeply sorry for that pain.

I also wish to apologize to the individuals that I lied to and misled, telling them that the work I had created was my own when I knew it wasn’t. You trusted me and expected honesty from me and I have let you down. I understand that my behavior has disappointed you and caused you grief, once again, I am sorry for that.

I deeply regret my actions. What I did was wrong and there is no excuse for it.

I should have better cited my sources and put forth more effort into creating original work. In the future, I will be much more cautious about my work, especially when it comes to using the work of others in it. Furthermore, I will be helping (officials) with this case by cooperating fully with any investigation, working to remove any plagiarized material and offering a full account of my plagiarisms, including both those already detected and any not yet found.

While I understand that there will be repercussions for my action and accept them, I sincerely hope that, with time and effort, I can move past these offenses to regain the trust of both those I harmed and others in my field. In the meantime, I wish to make myself available to those that I have harmed to contact me, ask questions and let me know how I can help them.

Thank you very much for your time and your consideration.

Obviously, this letter isn’t going to work out of the box for anyone and at least some editing will be needed. However, it does do two things that most plagiarist’s apologies have failed to do.

First, it’s an apology that fulfills the requirements of an effective apology. Second, it includes all of the elements that are key to a plagiarism apology:

However, most plagiarism apologies omit most, if not all, of these things. Few apologize to both the people they copy and the people they lied to, even fewer take blame for their actions and almost none offer help clearing the record or accepting consequences.

In many cases, these ineffective apologies did more to drag out the scandal and dispute than to resolve it. For most plagiarists, taking ownership of their actions, admitting that they were wrong and avoiding excuses might be the most difficult path, but it is the shortest through the scandal.

Plagiarism, in most cases, doesn’t have to be a career-ending offense, but the first step to moving past it is to apologize properly for it.

Until there is a proper apology, there is no real closure, no resolution. Without that, time has to heal the wounds and, as many plagiarists have found, that can take a while.

So, if you plagiarized and got caught, while making excuses might lessen the short term burden, the only way to prevent things from dragging on much longer than necessary is to take ownership of the misstep and apologize properly.

If you’re hesitant about doing that, it may be a good time to reflect on why you chose to plagiarize in the first place. Putting short-term gains ahead of long-term consequences is what got the mess started. Therefore, it stands to reason, doing the same thing won’t help you get out.