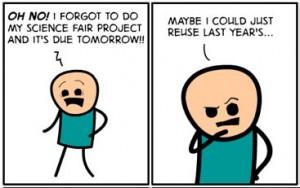 When it comes to matters of duplicate content, we are often our own worst enemies. Poor content planning, bad site design and general writing mistakes can make it seem as if we’ve ripped ourselves off many times over.

But what about those who deliberately copy their older works and writings in order to pass them off as newer creations? They are in a much different category and one that has given academia and the business world alike a significant problem.

Simply put, self-plagiarism raises a slew of ethical and even legal questions for which there are no easy answers. Unlike traditional plagiarism, which much more clearly-defined rules and consequences, self-plagiarism often exists in a gray area, one where it is hard to determine what action should be taken or even if anything wrong was done.

So what is self-plagiarism and is it an ethical issue? The answers aren’t easy, especially with so many contradictory rules and views on the subject.

Fundamentally, self-plagiarism is when an author or other content creator uses portions of an earlier work in a new one without citing the original content. This can happen in academia as researchers often use bits of old papers in newer ones, but it can also happen in creative and business environments as well.

The nature of this reuse can vary. Some consider it self-plagiarism to repeat ideas and concepts from earlier works without attribution while others limit it only to the use of actual words, images, etc.

To further complicate things, most of the definition of what is and is not self-plagiarism, as with regular plagiarism, depends heavily on the the arena the accusation is being made in and the expectations that come with it.

However, the main concept remains the same, the author using their own previous works in a newer one without attribution.

The ethics of self-plagiarism is where the debate truly begins. Where some wonder why there is an issue at all with self-plagiarism, others call it a scourge. Likewise, some see self-plagiarism as a contradiction even as others develop tools to root it out.

The reason for this conflict is the nature of plagiarism itself. The word “plagiarism” comes from the Greek root meaning to “kidnap”. The idea behind plagiarism is that you are “stealing” your words from somewhere else. However, with self-plagiarism there is no such “kidnapping” as you are putting your name to your words.

With no lie of authorship and no victim, at least in the sense that no 3rd party is plagiarized, many see self-plagiarism as a non-crime and a legitimate shortcut.

But at the same time, self-plagiarism does carry with it some level of dishonesty, at least in some situations.

The problem is that, when an author, artist or other creator presents a new work, it’s generally expected to be all-new content, unless otherwise clearly stated. For example, you, as the reader, have an expectation that the content of this article is new to me and Plagiarism Today, even if I have touched on these issues before, albeit comically.

This creates a situation where the audience of a piece is, to some degree, misled about it. But how much this harms the audience isn’t clear and varies wildly from situation to situation.

For example, with an academic paper, one is generally expected to showcase what they have learned most recently, meaning that self-plagiarism defeats the purpose of the paper or the assignment. On the other hand, in a creative environment, however, reusing old passages, especially in a limited manner, might be more about homage and maintaining consistency than plagiarism.

All of this, however, raises the question of what can or should be done about self-plagiarism?

When deciding if and how to deal with self-plagiarism, the first thing that has be decided is “What are the expectations of the audience?”

In some cases, the audience has no expectation that the work is new. For example, in the legal industry, self-plagiarism is virtually a necessity to survive. Copying passages from previous documents is essential not just to save time, but ensure validity.

Another potential example is on this site in the 3 Count column. I reuse the same text every edition for the calls to action at the beginning and at the end. Reusing the text, which isn’t part of the actual content, saves time and, in my opinion, isn’t expected to be original with each column.

An honest look at the expectations of the audience goes a long way in deciding what, if anything, should be done. This can be tricky though as different members of the same audience often have different expectations but, taken as a whole, it is usually easy to understand.

If the self-plagiarism does mislead the audience or otherwise defeats the purpose of the work. Then action should be taken. What that action is depends on the situation but schools have honor codes and contracts are written between creatives just for this purpose.

Generally, it’s best to err on the side of caution, both avoiding self-plagiarism and treating cases of it as an offense. Legally, it’s also best to play it safe and make sure to mention self-plagiarism in any authenticity guarantee you propose or sign. It’s important to be clear that “original” also means “new”.

Playing it safe is definitely the best approach as no one wants to be the case study about the ethics and/or legal implications of self-plagiarism. Even if it isn’t wrong, it certainly isn’t a good thing either.

In the end, the debate about the ethical and legal implications of self-plagiarism will go on for a long time. As long as there are authors who are looking to take short cuts, those that see self-plagiarism as an ethical solution will do so and continue to re-raise the debate.

In the meantime, the best thing you can do is avoid it completely, both by being careful not to self-plagiarize unless clearly appropriate to do so and make it clear your expectations of others not to do so.

For those most part, these issues arise when the creator and the audience have different expectations of the work. Make those expectations clear and the issue disappears.

It may be an awkward thing to do, but it avoids a much more awkward and difficult discussion later.

Credit: Comic image from Cyanide and Happiness. Some comics NSFW.