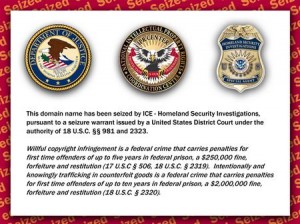 If you didn’t hear the news, late last week, while much of the country was away celebrating Thanksgiving, U.S. Immigrations and Customs Enforcement, better known as ICE, secured the seizure of some 82 domains that it said were trafficking in counterfeit goods and engaging in copyright infringement.

Though the bulk of the domains were clearly for sites selling counterfeit goods for brands such as the NFL, Louis Vuitton and Timberland among others, a few were seemingly seized solely for alleged copyright infringement, including the popular bittorrent search engine torrent-finder.com.

Especially hard hit was the rap and hiphop community which saw three prominent sites in its community, onsmash.com, rapgodfathers.com and dajaz1.com were also seized even though all three were music blogs and not well-known for distributing pirated music.

The seizures, however, have also caused a great deal of confusion and interest from webmasters, both from those who are wondering if they can get domains seized that infringe their content and wondering if their site might be a target for seizure later.

So, even though I try to keep the talk about such news stories to the 3 Count and the Copyright 2.0 Show (and Patrick O’Keefe and I did talk about the seizures at great length during the live recording yesterday, due to be posted tomorrow) its worth taking a moment to understand what these seizures mean from a more practical perspective and what the implications are for your site.

However, I think most will be disappointed and/or relieved to find that the answer is “Nothing”, especially considering how the seizures came about.

For Those Being Infringed

Though I’ve only had one or two people mention the possibility of getting domains seized, and, in both cases, it was likely half-hearted, it is worth noted that the odds of a smaller content creator successfully pushing a domain to be seized via ICE is slim to none.

Not only were most of the domains involved in the seizure related to counterfeiting, not copyright, but the ICE seizures were targeted at sites that were infringing the rights of major copyright holders, including the music and movie studios.

GIven that it is unlikely any infringement of your content, at least by one site, would rise to the level of criminal copyright infringement, even getting ICE, or any government branch for that matter, to take action on your behalf is slim to none.

For the majority of content creators, their remedies will be limited to cease and desist letters, takedown notices and, in rare cases, civil action.

Government action of any type just isn’t practical for smaller copyright holders and the fact ICE seized a series of domains doesn’t change that.

For Those Worrying About Being Seized

The more common concern, however, is coming from webmasters worrying about having their domains seized.

This has received a lot of attention as the three rap sites that were seized were not torrent sites or file download sites, but rather, were blogs and communities and, especially in the case of onsmash, seemed to have a lot of credibility for being a legitimate site.

Still, the likelihood of being seized, especially for a blog or community site, is almost nil. Considering that there are millions of domains registered every year and less than half a dozen were seized in this last raid solely for copyright reasons, it doesn’t seem likely to me any site has much to worry about.

Unless you’re doing something, such as running a file download or a bittorrent site, that earns the attention of those major rightsholders and does so at a level that warrants the attention of the government, you probably aren’t in danger of being seized. The odds are many times greater that you’ll be faced with cease and desist letters and DMCA notices than a seizure.

Still, some sites that might be at risk, such as larger bittorrent sites like Demonoid, are taking precautions and either snapping up backup domains or moving to domains outside of U.S. control.

Still, for sites that do their best to be legitimate but may accidentally cross the line from time to time or have a user do so periodically, there really isn’t much to fear at this time. The number of domains involved is small and likelihood of a non-major infringer being targeted is still practically nil, even if it does turn out that these three sites were not heavy infringers.

In short, your average webmaster has little, if anything, to fear from this, especially if they are acting in good faith.

To be clear, I have a lot of problems with these seizures. For one, there is almost no transparency about why each domain was targeted, which is a big part of why there is so much confusion and anger. We’re left to largely guess who asked for the seizures, how they secured them and why ICE chose the sites they did.

We may get some answers to these questions as several groups are rising to challenge the seizures, but we don’t have them right now.

Also, the seizures further illustrate how slanted U.S. copyright law is toward larger copyright holders as it is just another enforcement tool not available to smaller creators, no matter how much of their livelihoods depend on their work.

Finally, the measure seems likely to be an ineffective one. Though I agree with Patrick that, just because someone might come back doesn’t mean you shouldn’t take what action is available against them, several of the sites have returned at different domain names and, thanks to the publicity, are likely unaffected by the seizure from a traffic standpoint.

In short, the seizures, from my perspective, don’t seem to have done much more than cause concern, rile anger and highlight inequalities in the law. Though closing the domains for the counterfeit sites, the bulk of the closures, makes sense both from a trademark and from a consumer protection standpoint, the handful of copyright-closures don’t seem to have been worth the headache, especially considering the sites that were targeted.

Hopefully, if ICE does do another round of seizures in the future, which seems likely, it can learn from its mistakes and both better target its attacks and offer greater transparency. Otherwise, they aren’t making much of a statement as no one seems to be getting the message.