1951 must have been a very bad year to be named Dennis.

The UK comic Dennis, which first appeared in Beano #452, was created by David Law and published by D.C. Thomson as a comic strip inside a popular comedy comic book. It’s U.S. counterpart was created by Hank Ketcham and initially distributed by Post-Hall Syndicate as a syndicated comic strip for newspapers. 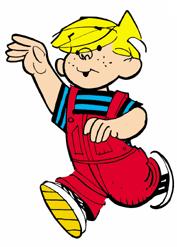 Though, based on this simple fact, many draw the conclusion that one of the two creators had to have plagiarized the other, it’s become clear that simply wasn’t the case. Not only did the two creators have no way of knowing what the other was working on, but the two characters are actually extremely different. The UK version is a true menace, a mean-spirited boy who likes to cause trouble, and the U.S. version is happy-go-lucky child that causes trouble without intending to.

The two creators largely agreed to allow each other to work on their respective comics and both are continuing in at least some form today (though the UK version is now known as Dennis and Gnasher, named after Dennis’ dog). Though the U.S. version may be the most popular internationally, the UK version is better known in its native country. No legal action has been taken against either creator.

Still, the coincidence is one of the best-known in the publishing world and was recently highlighted on Cracked. However, it also highlights one of the most difficult aspects of plagiarism detection, trying to separate what is a plagiarism and what is a coincidence. Sometimes, it can be nearly impossible to be certain.

Though I’m not usually one to believe in coincidences, and it’s always possible that both creators independently drew their idea from the same or a similar source, there is definitely a great deal of proof that the similarities were not intentional.

In short, even though it’s clear with nearly 60 years of perspective that the two Dennises have nothing in common other than their name. It should have also been clear in 1951 and, by all accounts, was both creators simply agreed to continue with their characters without making any changes.

Still, the case highlights just how strange some coincidences can be when dealing with plagiarism.

What are the odds of two Dennis the Menace comic strips appearing on the same day on opposite sides of the ocean? Almost nothing.

However, it happened and in a universe as big as ours strange coincidences are bound to happen. Separating what is chance from what is intentional requires more than just identifying what’s similar, it involves looking at what’s different, what would be gained by the copying, if plagiarism is even possible and what the parties involved have to say. Even with that, it sometimes comes down to a judgment call based on experience, intuition and education.

While most clear-cut cases of plagiarism can be detected as such easily, as can most cases of modified plagiarism, many cases need a deeper look to fully grasp what’s going on. As with the Dennis the Menace case, often times you find out that the answer is just chance, nothing more.

The universe, sometimes, can be a very strange place.