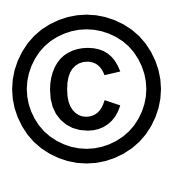 Back in 2013, we took a lengthy look at the similarities and differences copyright and plagiarism.

Suffice to say that copyright is a legal regime that deals with unauthorized copying and sharing of a work while plagiarism is an ethical regime that covers attribution and how appropriately use the work of others.

But, while the ethical vs. legal dichotomy is an important distinction, copyright stills ends up being the most common legal mechanism for enforcing the rules of plagiarism. This creates a great deal of overlap between the two, even if it was never intended.

But that lack of intent becomes very clear when you look at what the two cover. In truth, the overlap between plagiarism and copyright is fairly small, with much of the ground plagiarism covers not just unmentioned in copyright, but intentionally not covered at all.

While the overlap between the two is still very important, it’s overlap because of the way people typically plagiarize, not the concept of plagiarism itself.

The Breadth of Plagiarism, The Narrowness of Copyright

Plagiarism, at its core, covers a wide variety of things. This includes words, ideas and facts as the major three things but, depending on the medium and the creativity put into them, can include syntax, style and even format.

Copyright, on the other hand, not only doesn’t cover facts, ideas, syntax, etc., it expressly forbids them. This is because copyright vests solely in creativity, not in the effort behind the creation.

The reason, quite simply is that an alphabetical list of names and numbers doesn’t have the requisite level of creativity to be copyright protected, regardless of the resources and effort that went into compiling it.

While the bar for that creativity is extremely low, “at least a modicum” under the law, it prevents facts and information from being copyright protected at all. Instead, only their expression gets coverage. This is despite the fact that plagiarizing facts and research is a heinous crime in academic circles.

In a similar vein, while you can certainly plagiarize something that wasn’t written down, you can’t infringe it. Copyright only applies to works that are embodied in a tangible medium of expression. Though plagiarism plays no favorites with how an idea or a passage is presented, copyright certainly does.

The reason for these very fundamental differences is the intent of the two standards. Copyright was never meant to replace plagiarism and plagiarism cannot replace copyright. However, when it’s all said and done, that’s probably a very good thing.

The Intent of Copyright and Plagiarism

But philosophy is at home with discussions around plagiarism as it’s the mechanism we enforce the standards of authorship and attribution.

Philosophy is much less at home with copyright. Copyright is a legal right that focuses primarily on the commercial aspect of creation and, specifically, creativity. Though this is less true in other countries where moral rights are a bigger part of thee picture, in the U.S. the focus is almost entirely on the commercial rights of the creator or rightsholder.

It’s this focus that marks the biggest difference between the two. Plagiarism deals with ethics and authorship, copyright with commercial rights as a means to encourage creativity. Every other difference stems from that fundamental distinction.

Once you understand that difference, it’s much easier to grasp the ways copyright and plagiarism vary and where they overlap. It explains why attribution is a shield against plagiarism but not against infringement or why fair use is important to copyright but not really a thing in plagiarism.

This dichotomy between the two is fundamental to everything that both plagiarism and copyright stand for and explains nearly all of the differences between them./

Why Is This Important

To be clear, this isn’t a call for change. Altering copyright to be more like plagiarism or vice versa would create its own set of challenges. While there may be ways to improve both standards, that is not the purpose of this article.

Instead, it’s to highlight why cases such as the recent lawsuit over The Shape of Water are so complicated. As we discussed in our analysis earlier this month, there’s significant reason to believe that plagiarism occurred, even if it is unproven at this time. However, even if the plagiarism allegations are proved, its unclear if the film meets the qualifications of copyright infringement because of the nature of what was duplicated.

This isn’t to say it’s impossible. The Blurred Lines verdict (which is being appealed) is an interesting example. Though using the vibe or sound of a musician, especially a distinctive one, may feel like plagiarism to some (though not to me personally), it didn’t seem like a candidate for copyright infringement. However, the jury disagreed and ruled against Robin Thicke and Pharrell Williams.

Still, the point is that, as long as this dichotomy exists, we will be confronted with cases that feel like plagiarism but are completely unenforceable in courts, no matter how “wrong” they feel.

Copyright is not there to protect authorship or identity, it’s there to protect the commercial interest in the work. That, in turn, is something that every plagiarized person would be wise to remember.

Being plagiarized is neither easy nor fun. But as long as copyright remains the primary mechanism for dealing with plagiarism in the courtroom, there will be cases where, no matter how great the injustice feels, there’s little that can be done.

Copyright and plagiarism are fundamentally very different and, though they often overlap, that overlap occurs when a plagiarism harms the commercial viability of a work and, even then, only when it deals with the expression of its ideas, not the ideas itself.

While this view is intentionally simplistic (and is not looking at derivative works) it makes the point about why many egregious plagiarisms go unpunished, at least in courts, and why many who are wronged won’t find justice in a courtroom.