Yesterday, Benny Johnson, the chief content officer for the Independent Journal Review, was suspended indefinitely for his part in publishing an unsubstantiated conspiracy theory story about Former President Barack Obama.

However, those who follow journalism ethics have long known Johnson’s name. In July 2014 Johnson was fired from Buzzfeed, where he had been serving as the viral politics editor, after editors there discovered plagiarism in 41 out of the 500 works they checked.

Those allegations of plagiarism began when Twitter users @blippoblappo and @crushingbort noticed significant overlaps in Johnson’s work following Johnson’s attempt to call out the Independent Journal Review (the publication he was just working for) for plagiarizing him.

However, where the Buzzfeed scandal should have been the end of Johnson’s career (at least for a long time), he was quickly rescued. In September of 2014 he was hired by National Review Online, though initially not in a content-producing capacity.

But just months after being hired by at National Review, he was snatched up again, this time by Independent Journal Review (IJR) in February 2015. There, he has worked ever since.

However, it probably shouldn’t come as a surprise that Johnson, an editor already-fired once for plagiarism, would find himself in another ethics scandal after going to work for the organization he once accused of plagiarism.

What does come as a surprise is how much worse the story gets when one looks at the details as reported by Business Insider, which paints the picture of a journalist given far too many chances to do far too much harm.

The Many Chances of Benny Johnson 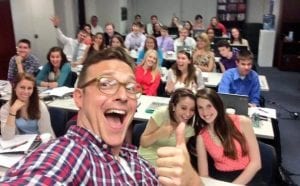 When Johnson was fired from Buzzfeed, many felt that his career was likely over. With over 40 counts of confirmed plagiarism to his name, Johnson was already known as one of the most prolific plagiarists in journalism’s history.

When Johnson was hired by the National Review, many were understandably upset and angry. National Review, in a statement to politico, said that “Benny made a terrible mistake. But he has owned up to it and learned from it.” They went on to say that he is a “talented journalist” and had “a lot to contribute.”

But it’s clear now that Johnson hadn’t learned from his ordeal. After going to work for the Independent Journal Review, the publication Johnson had previously accused of plagiarizing him, trouble began brewing quickly.

According to the report in Business Insider, Johnson was again accused of plagiarism in late 2015. This time it involved a September 2015 article about Rep. Cathy McMorris Rodgers, who was, at that time, was being considered to be Speaker of the House.

While the incident was said to be investigated, it is unclear if any disciplinary action was taken.

But this wasn’t Johnson’s only issue at the IJR. According to Business Insider, he faced a formal warning for violation of the attendance policy, took credit for work that was a team effort, berated other staffers and committed other ethical violations, such as taking selfies with politicians.

But even as ethical concerns mounted, so rose Johnson’s star and the star of the IJR itself.

The publication became more prominent due to close ties with the Trump administration, even becoming the sole media outlet granted access to Secretary of State Rex Tillerson on his first trip to Asia. This is impressive considering the IJR was only founded in 2012.

As for Johnson, he rose to the position of chief content officer, giving him significant power at the publication. He used that power to assign the story at issue to the publication’s viral editor, Kyle Becker.

That story was a conspiracy-oriented piece about former President Barack Obama’s visit to Hawaii. It included allegations that he used it to influence the Hawaiian judge that blocked current President Trump’s travel ban. IJR has since retracted the story.

There were claims that Johnson had been warned were unfounded but he assigned the story regardless. This story prompted the suspension of Becker, Johnson and content editor Becca Lower.

But while it’s uncertain if Johnson’s career is over, one thing is for certain: It never should have lasted this long in the first place.

When it Should Have Been Over

July 2014 could have and should have been the last we heard of Benny Johnson.

Regardless of what one thinks of his political views, Johnson’s career should have been over after his prolific plagiarism was discovered.

That’s the fate that befell similar journalists who committed similar cardinal sins including Jonah Lehrer, Jayson Blair and Stephen Glass. None of the three ever worked for a major publication again (though Lehrer did publish one additional book and contribute to another).

Meanwhile, Johnson seemed to bounce back almost immediately. One of the largest plagiarism scandals in recent history and he was only unemployed for a few weeks before landing another prestigious job.

But while it was easy at the time to compare Johnson to Jayson Blair, the plagiarizing New York Times reporter, his story has turned more into a tale of Stephen Glass. He’s clearly a talented reporter but one whose ethics clearly can’t keep pace with his ambition.

Also like Stephen Glass, his editors and publishers had a great deal of warning about potential. Not only was Johnson fired for plagiarism previously, but new allegations were raised, concerns over his attendance and his treatment of his colleagues.

But, much like Glass, Johnson kept getting new chances. The reason, also like Glass, is that Johnson was (and perhaps still is) good for business.

With Johnson, National Review and IJR both set aside significant ethical concerns in order to hire a journalist that they felt would be lucrative.

Unfortunately, as we’ve seen with Glass, ethical issues such as these rarely simply go away. Johnson, it would seem, was not humbled from his fall from grace but emboldened by his soft landing and never corrected his ways.

If Johnson’s career had been halted, or at least more seriously paused, after his firing at Buzzfeed, we wouldn’t be reading about him being involved in other lapses of journalism ethics.

When it comes to plagiarism and other ethical missteps, I am strongly in favor of forgiveness under the right circumstances. People, even at the highest levels of a profession, make mistakes. Sometimes, a second chance is more than appropriate.

But 41 plagiarized articles is no simple mistake. It shows a pattern of dishonesty and should be treated as such. While people can learn and change their ways, if unethical actions have no consequences there is no reason for those caught to change anything.

In the end, it comes down to this: Was Benny Johnson forgiven and rehired because he had truly learned his lesson and could do great work? The evidence clearly says no.

Instead, he was forgiven and rehired because he was lucrative and he was a way that National Review and later the IJR could trade on their reputations to get clicks and dollars.

While journalism certainly is a business, it’s nothing without its ethics. This is doubly true in this era of fake news and attacks on the media.

If journalists wish to maintain their place as the fourth estate, it has to be done by keeping to the ethical codes that have made the institution so valuable.

Benny Johnson showcases what happens when those ethics are set aside in exchange for greater revenue. Now we have to see how the rest of the industry responds.