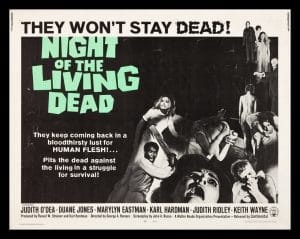 As we get closer to Halloween, it’s a great time to revisit some of our spooky copyright stories from the past.

As I reported back in 2011, Night of the Living Dead, despite having been released in just 1968, is a public domain film. The reason is complicated and deal with the laws that were in effect when the film was released.

Suffice to say though that, due to an unfortunate and avoidable error, the original film was distributed without a copyright notice. As such, the film was not given copyright protection and was placed into the public domain from day one.

However, this ended up being a boon for the modern zombie genre. Causing the word “zombie” to take on an all new meaning as other filmmakers were free to adapt and build on the work.

It even worked out fairly well for the film’s creators, who ended up creating their own (separate) zombie film series that were both successful in their own rights.

In this video, we take a look at Night of the Living Dead, how it fell out of copyright and the impact that mistake had both on the film and the zombie genre as a whole.

It’s certainly one of the most important influences copyright has had on Halloween and horror and a reminder of just how important copyright is to our culture.