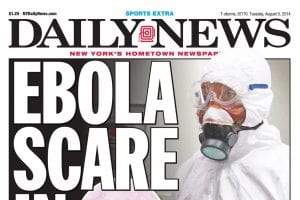 Yesterday, the New York Daily News fired one of its editors in what has to be one of the most bizarre and worrisome plagiarism scandals in quite some time.

The story goes like this. Earlier this week, accusations began to fly that New York Daily News reporter Shaun King had plagiarized an article from The Daily Beast. The evidence, it seemed, was damming and included long passages copied verbatim, including typos that appeared in the original report.

However, even as the Internet mob was at his virtual door, King hit back by posting a timestamped email that showed the article he sent to his editor contained blockquotes and attribution to The Daily Beast, all of which was edited out. Now The New York Daily News has fired the editor involved and claiming that there have been may other mistakes.

Though the editor was not named officially, CNN reports that it’s Jothan Sederstrom.

I’m working on a full article about this story but wanted to get some first thoughts online quickly so I shot a short video detailing the case and just why it’s so worrisome.

Suffice to say though, this case is unlike anything I’ve seen before and really points to some of the challenges of attribution in a fiercely competitive environment, such as online news.

So, until I’m able to pull together the full article, hopefully this will get you satiated for a bit.