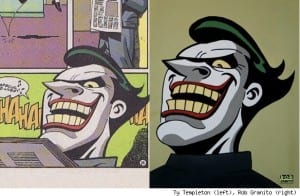 In March 2011, the comic book world was in an uproar over a man named Rob Granito.

Over a period of several years, Granito had built up a very large resume including working on Batman, Teen Titans, Spiderman, Iron Man and having worked on various other projects, including the Batman stamp for the U.S. Postal Service.

Granito, however was best known on the convention circuit where he would sell original artwork to eager fans. He had been attending shows since at least 2009 and was featured prominently in many events.

However, it turned out that his resume was mostly false and his original artwork was anything but. After Granito claimed to be working on an upcoming Batman series, his story began to fall apart.

The tale ended with a verbal altercation between Granito and two real comic book creators, artist Ethan Van Sciver and writer Mark Waid. This altercation not only led to Granito being banned from all major comic conventions, but prompted him take down his site an social media accounts.

A petition to allow Granito to return has generated less than 175 signatures after three years.

But while Granito’s story may be the most famous, largely because he rose to a very high level of prominence on the back of his lies, the truth is that he’s far from the only plagiarist to have been involved with comics and has many others following his footsteps. 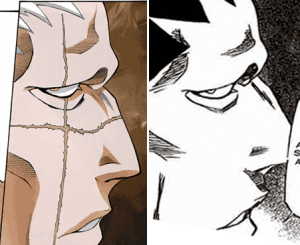 To be clear, Granito wasn’t the first to find popularity through plagiarism. A year prior the comic industry was focused Nick Simmons, the son of KISS frontman Gene Simmons, who faced plagiarism accusations of his own over a manga-style comic book he released entitled Incarnate.

In the end, the publisher of Incarnate, Radial Comics, halted publication of the series.

More recently, Canadian artist Chantella Viala has been given the dubious moniker “The Rob Granito of Canada” for her copying and reselling of other artists’ work without attribution. After being called out, she too shuttered her site and social media accounts though her site appears to be back online at this time minus the controversial images.

However, these cases are far from the only ones. Every day on sites like eBay, Etsy, DeviantArt people make, distribute and sell art based on comic books. These works run the gamut from original fan reimaginings, which bring their own copyright troubles, to outright plagiarized traces of famous artwork.

But all of this raises the question: Why does the comic book industry have such a large problem with plagiarism? The answer is that it really doesn’t, but it’s easy to understand why the perception is there.

The Nature of the Problem

The comic book industry is not alone when dealing with plagiarism. As I posted recently, nearly every creative industry deals with plagiarism in some way or another. While the comic industry and its fanbase may have the Robert Granito is a Fraud Facebook group, which covers a variety of plagiarism issues, photography has Photo Stealers and designers and illustrators have yet another group.

In short, this is not a problem unique to comic books or any industry.

That being said, the comic book industry is in something of a unique position when it comes to plagiarism and some of it might explain how the latest scandals have gone down.

Basically, the comic book industry, more than most, is a fan-driven industry. Fans infringe, but fans also enforce. It’s an industry that values creativity and originality, but also an industry that, through no fault of its own, attracts a number of people who want to push the boundaries of fan art and/or simply fake their way to a career.

This raises the difficult question: What can the industry do? There isn’t much, but there are a few things.

Due to the limited legal enforcement from copyright holders, rules and enforcement are very much community-driven. This is very common when dealing with fan art and fan fiction, however, greater top-down guidance could both help fan sites set their boundaries and prevent accidental missteps.

These types of rules are actually very common in publishing and range from strict policies that bar all fan fiction to more permissive ones that set restrictions.

These policies are difficult for companies to implement because A) They do involve giving away certain (if very limited) rights to the work and B) The fear of lawsuits when something in the cannon is similar to a preexisting fan fiction work.

While these are understandable concerns, the fact is fan fiction and fan art is already happening widely and openly. The risk of lawsuit is already present and, while giving away rights is never easy, it’s at least an opportunity to set clear boundaries.

The other thing that can be done is provide a clear and public means to report infringement and plagiarism. While fans are the most powerful and effective tool for dealing with these kinds of infringements, the ability to report and possibly involve rightsholders would be very helpful in cases such as the Granito where there is a very serious pattern of infringement and there may be a reason for the companies to get involved.

Though fans can be very effective at enforcing plagiarism norms in fan fiction/fan art communities, help from rightsholders can go a long way to keeping the peace and preventing major conflicts.

Though Granito is far from the only plagiarist to have misused comic art, he is unique in that he was able to operate for years, build a career and suffer no ill impacts other than ostracization from the community. There were no legal consequences and some even wanted to bring him back.

While fan enforcement is a powerful tool, there are cases where it is inadequate and more traditional enforcement is called for. Publishers and artists, not eager to go to war with their fans, have been reluctant to do so.

This means that there will almost certainly be people like Granito operating in the comic book world. Though few will be as successful as Granito, they will continue to operate, especially at the fringes.

Unfortunately, that also means there’s no end in sight for the issue of comic book plagiarism. The nature of the industry simply makes it too ripe of a target for plagiarists. However, vigilant fans and cooperation from the rightsholders can help mitigate this problem and ensure that original work is protected and that fans are not misled about what they are buying.

Big thanks to Victor Miller at The Word in Print for the story idea.