Most people who read this site know, in addition to my love of copyright and intellectual property, I also have a big space in my heart for haunted attractions. Not only do I run a small home haunt in my garage every year for charity, but I visit, review and cherish at least a dozen haunts every year.

Earlier this week, I attended the Haunted Attraction National Tradeshow and Convention, HAuNTcon and spent three days taking a variety of classes, meeting industry leader and basically chatting with my fellow haunters.

It was a great time, but, inevitably, when people learn about my day job the conversation spills over to copyright and intellectual property issues. There’s a lot of confusion and worry about copyright in the haunt industry and those issues have been brought to the forefront but at least a few attractions being threatened with lawsuits over infringement.

While I don’t want to mention any person or attraction by name, I thought it would be worthwhile to take a few minutes and go over a few of the points and concerns that came up over and over again in my conversations. Some of these points were covered in my 2010 article on the subject, but a lot of it was new.

So, without further ado, here’s a look at what everyone was talking about regarding copyright and the haunt industry.

Probably the most common question I was asked was about music in haunted attractions.

If you play music at your haunted house, whether inside the haunt or for patrons outside, you need to license that music. This can include having a radio playing, using Pandora or your own playlist. Even if you own the songs (Examples: Bought the CD or purchased on iTunes), publicly performing them to your customers is an infringement without a license.

With music, there are separate copyrights in the composition of the song (the part that’s written down) and the sound recording (the thing you’re actually playing). Since a recorded song has both, both rights must be considered.

If you’re just playing music over a loudspeaker, you only need to concern yourselves with the rights in the composition. The reasons for this stem way back to when music was either played live or on player pianos, but the gist is that there’s no public performance right for sound recordings, save a limited exemption for digital streaming services.

However, if you want to make sure that your music licenses are complete, you need to get with four different agencies: American Society of Composers, Authors and Publishers (ASCAP), Broadcast Music Inc. (BMI), Society of European Songwriters, Artists and Composers (SESAC) and Global Music Rights (GMR).

While ASCAP and BMI are considered the “big two”, odds are that, if you play enough music, you’ll likely play at least some content licensed by the others as well, making it best to work with all four.

However, the licensing gets much more difficult when you start trying to use popular music in commercials. There, you have to obtain the synchronization rights, often called the synch rights, for both the composition and the recording. This must be negotiated with the publishers and labels directly.

The flow chart below does a good job highlighting the current music licensing landscape. 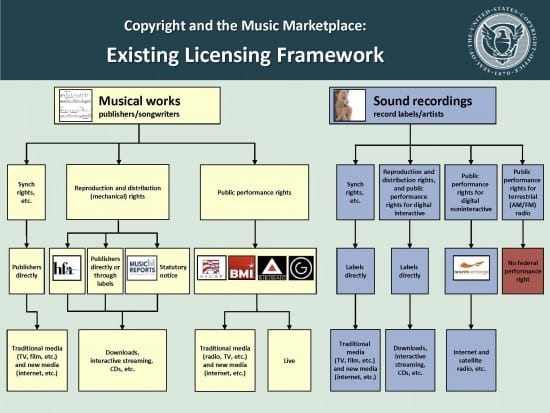 For the haunt itself though, the biggest issue is the fact that performance rights agencies aren’t used to handling haunted attractions and representatives may not be familiar with licensing music to them. For live venues, they are more used to bars, restaurants and grocery stories than haunted houses.

Many haunts, in particular smaller ones, include characters, props and other elements from movies and TV shows. While this includes many of the obvious iconic horror characters, such as Freddie, Jason, Pinhead, etc., it also includes elements from less-obvious sources such as Doctor Who, Star Trek and the list goes on.

However, this use raises serious copyright and trademark concerns. These characters are staunchly protected by their creators and using them in a haunted attraction without a license can have repercussions.

There may be exemptions for fair use of these characters, especially if the haunt is using them to parody or lampoon the character in some way. Also, minor mentions and allusions may be acceptable in some situations. However, putting the characters front and center in your haunt and especially in your advertising is a serious risk.

Despite that, some haunts feel that, since they are only open for a few weeks at a time the legal wheels turn slowly, that there is little risk. That may be true, but most attractions are open multiple years and more and more haunts are doing year-round activities, just see how many are open tonight for Friday the 13th and tomorrow for Valentine’s Day.

Furthermore, it doesn’t take very long for a lawyer to send out a cease and desist and having to retool your ads and your whole attraction mid-season may be a bigger disaster than a lawsuit.

Besides, original characters make a haunt more memorable and more unique. It’s worth taking the time to create your own back story.

Haunted attractions are increasingly digital affairs and use a lot of (often expensive) software to get the job done. This includes photo editors, audio editors, video editors, computer aided drafting (corrected for you Leonard Pickel), personnel management software, web development tools and the list goes on.

Unfortunately, piracy is a serious problem at some haunts. Though most make an effort to ensure their software is correctly licensed, others have not. This is unfortunate not only because of the legal risk, but because there are, usually, free and low-cost alternatives that could use the support of customers.

While many vendors don’t take strong steps against piracy for personal use, the Business Software Alliance and the companies it represents very seriously target commercial use of their work, such as in haunted attractions.

Piracy is always bad, but it’s much worse for a business and it only takes one disgruntled person or one mistake in pirating software to find yourself in the crosshairs.

This issue is definitely more trademark than copyright, but bears touching on.

With haunted attractions there’s definitely a lot of naming overlap. There are at least a few names for haunts I can think of that have at least three locations in the United States using them. One is not just the title of a 1960s movie, but has at least six different haunts using it.

Trademark protects the names, logos and other elements of a haunted attraction from confusion within the marketplace. If a haunted house opened up down the road or even across town with the same name, it would almost certainly be trademark infringement. However, since haunts operate in a local market, one across the country raises fewer issues.

That being said, very distinctive marks, meaning a mark that had limited or no meaning before it was used (Examples: Kodak, Verizon, Starbucks or Exxon) can get greater protection and can more easily be registered with the U.S. Patent and Trademark Office. This added protection can be used to shut down uses that might be acceptable with a less distinctive mark.

If you don’t want others to use your name, it’s important to pick a truly distinctive name. For help with that you can look at the distinctiveness spectrum and see where your name falls.

However, most haunt names are more “Suggestive” and are only offered limited protection, especially when another opens up outside of the market.

All in all, HAuNTcon was a fascinating experience. It was my first one but almost certainly won’t be my last. The next one is in Birmingham and I’m already making plans to go. We’re also making an effort to go to Transworld’s Halloween and Attractions Show in March though there’s a possible schedule conflict.

While the coolest part what meeting people who share my passion for scaring, it was interesting to see and think more about how my worlds collide.

Indeed, I’m in the process of contacting the many people I met at HAuNTcon and will be in touch with everyone soon. But if there are any other haunters out there with questions not covered here, please feel free to contact me and I’ll do my best to help.