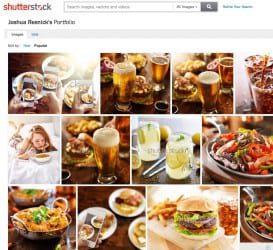 In January 2013, model Nichole Forni agreed to a photoshoot with photographer Joshua Resnick, a veteran stock photographer. What is known about that shoot is that Forni signed a model release to allow the use of her image for stock photography and carried out the shoot, which contained several shots of her wearing lingerie.

According to Forni, she was expressly promised that her images would not be used on pornographic or adult-oriented websites. Back in May, she filed a lawsuit against Resnick and 3 dozen other defendants for the misuse of her image.

In the lawsuit, she is accusing Resnick of breach of contract, fraudulent inducement and fraud. All of the defendants are sued for breach of terms of service, violation of the Lanham Act (unauthorized use of her image to endorse a product) and Ohio right to publicity laws. The suit also seeks an injunction against the continued use of her images.

However, according to Resnick, he made no such explicit promise because he couldn’t. He says he explained about stock photography and said that the images wouldn’t be licensed for pornographic use but that he couldn’t control all uses.

He went on to say that his stock photo partner, Shutterstock, expressly forbids such use and that, to the best of his knowledge, the uses of the photos on pornographic sites are infringing and without a license from him. Resnick has also launched a crowdfunding campaign to get help with his legal bills.

Though the lawsuit was filed in May, it’s only recently received a great deal of media attention appearing on The New York Post and The Daily Mail among others.

However, the lawsuits highlight some of the less-discussed dangers of copyright infringement (both as victim and as perpetrator) and calls into question an industry practice that may need to be updated.

The Problem with an Oral Contract

At the heart of the dispute is what was said before the release was signed.

While the release itself covers most of what you would expect from a model shoot, it doesn’t address (one way or another) the use of the images in pornographic content nor does it address what responsibility Resnick had to deal with infringements and misuses.

Forni claims that, before the signing of the agreement, she was promised explicitly that the images would never be used for pornographic purposes. Since the release doesn’t address those issues and doesn’t waive any previous oral contracts, it’s at least theoretically possible (to the best of my understanding) that such an agreement could still be in effect.

However, Resnick claims that he made no such promises and instead, “During the shoot I also told the model that the images would be for sale for stock photography and explained how stock photography works. I explained to her that these agencies prohibit pornographic use in their terms of service.” He also claims to have a witness to this.

There are other discrepancies in the story. In her lawsuit, Forni says that the shoot was “Trade for Portfolio” (TFP), meaning that she did the shoot for free in exchange for use of the photos to promote herself as a model. Resnick, however, says that Forni was paid via PayPal and has records indicating as such.

But while records may clear up the payment issue, there are no records of the alleged oral contract or conversations surrounding the use of the images. That issue forever remains a case of what each person thinks they said versus what they think they heard.

That, unfortunately for both parties, is at the very heart of the lawsuit and not something that will be resolved quickly.

However, the case belies a much larger issue and one that all creators, in particular photographers, need to be aware.

What Could Have Happened

Infringements, by their very nature, are done without the permission of the copyright holder. If you infringe my photographs, I clearly didn’t license, authorize or approve (or any other synonyms you wish to use) of the use.

Considering that Resnick seems to partner exclusively with Shutterstock and the Shutterstock license does forbid the use of images in “pornographic, defamatory or otherwise unlawful or immoral content,” it does seem likely that these uses are infringing and were not authorized by Resnick or any of his agents.

How the pornographic sites obtained the images is a matter for debate. They could have done any of the following:

In the first three cases, the use of the photo would be a clear copyright infringement, even if the user didn’t know that it was. In the final case, the use wouldn’t be an infringement, but certainly look worse for Resnick, who, by his own admission, said that the photos wouldn’t be licensed for pornographic use.

But since there’s no proof at this time that Resnick licensed the photos for pornographic use, the most likely cause of the issue appears to be that, somehow, these sites and companies obtained and used a photo in an manner it wasn’t licensed for, making it an infringement.

The question is, what happens now?

To me, there are two very sympathetic parties in this case. First, Forni clearly did not want to be associated with escort sites and pornographic ebooks. That’s perfectly reasonable for anyone, but doubly so for someone wanting a career in non-pornographic model. It’s likely that her right of publicity has been violated along with other issues she raised in her lawsuit.

However, Resnick, as the photographer, almost certainly didn’t give authorization for these images to be used in this way. These images are infringements and not only is he unable to control the use, but he’s a victim himself, of copyright infringement.

Resnick, as the copyright holder, certainly has easier means of enforcing his rights than Forni. Resnick, for example, can use the Digital Millennium Copyright Act (DMCA) to order many of the images be removed, if he can confirm they are infringing. For Forni, the Communications Decency Act (CDA) prevents web hosts and other intermediaries from being liable for issues such as defamation and privacy, making it much more difficult to compel their removal.

This has long been putting pressure on artists, in particular photographers, to strongly enforce their works to protect the rights of models as well as their copyrights. This lawsuit stabs at the core of that issue, even if it doesn’t intend to.

What obligations do photographers have to protect their models from misuse of their photos? The answer, by default, is none as they are separate rights. The issue arises though when a photographer makes promises about how a photo will be used or promises to protect those rights.

However, by in large, photographers haven’t thought a great deal about model’s rights in the face of infringement. This is partly because most copyright infringements don’t raise models’ rights questions, as this case does, but also because the relationship between models and photographers is, generally, cooperative.

Though cases like this are fairly rare, it’s important for photographers (especially when doing shoots that could be used in ways the model didn’t intend) to be clear about what photographer obligations are when and if infringement happens.

It’s not a pleasant topic, but in 2015 infringement is all but certain and it’s best to plan for it before the shoot takes place and get that plan in writing.

Doing otherwise leaves the door open to misunderstandings and, as in this case, lawsuits.

To be clear, I don’t blame Resnick for what happened. Unless evidence arises that he was responsible for selling the images to the third parties, it seems likely that these infringements are out o this control and, even if he attempted to stop them, there is no way he could stop them all.

While a better model release could have prevented this lawsuit, the one he used is fairly common and standard in the industry. It’s a standard though that likely needs to change.

As I said above, my sympathies lie with both parties sin this case. No one, regardless of whether they did a sexy model shoot, deserves to have their image used in this manner without their permission. Likewise, it seems probable Resnick himself is a victim of copyright infringement who has had his own work passed around without permission and associated with entities he did not choose to associate with.

In short, this is a bad situation for everyone but time will tell if a lawsuit between the two was the best way to resolve this or if the two sides should have worked together to stop those infringing their rights.

Either way, these scenarios are likely to become more common in the future and are something that photographers should be prepared for. So take a moment to review your releases and agreements to ensure that, when it’s all said and done, everyone knows what obligations exist when the images are inevitably infringed.