This time last year, NetNames teamed with the Digital Citizens Alliance to release a study about the size of the “piracy universe” and how piracy, despite the increase in legitimate alternatives, was still a growing problem.

This year, they’ve come back with another study, this time focusing on the issue of cyberlockers and, in particular, how profitable they are.

The study looked at some 30 site including the 15 most popular direct download cyberlockers, which simply store files for saving, and the top fifteen 15 streaming cyberlockers, which host video and audio files that are viewed online rather than downloaded.

Across the 30 sites, the total estimated revenue $96.2 million, which averaged to $3.2 million per site. However, the variance in revenue was high as one site alone earned an estimated $17.6 million per year while others earned almost nothing. That money was earned from a combination of advertising, paid subscriptions and “other” revenue, which was primarily software companies paying the cyberlocker to get users to install certain software.

Throughout there report, it becomes clear that cyberlockers are big business and that the operators of such sites are not doing it for altruistic reasons. Someone is becoming reasonably wealthy from these sites, but it’s not the people who produced the content that drives traffic to them.

How the Study Was Done

The basics of the study are fairly simple. NetNames looked at the top 30 cyberlocker sites, including the top 15 direct download and top 15 streaming cyberlockers, and then looked at five different elements of those sites.

Given the fact that the cyberlockers in question do not post a great deal of information publicly, a lot of this was estimation. For example, traffic statistics were provided by Comscore, a service that specializes in traffic data.

With those numbers, NetNames then turned to the data that is known about Megaupload to concoct two separate formulas for estimate subscription revenue. Those estimates were then averaged to get the amount listed in the report.

Likewise, hosting costs were estimated by looking at the host of the site and then estimating the size of the site and the amount one would need to spend to host a similar site in terms of size and traffic. For staffing costs, NetNames looked at a cyberlocker with a known number of staffers, 4Shared, which had 32 employees listed on LinkedIn, and then estimated how many visitors each staff member could handle. That number was then multiplied by the average salary of a software developer in the site’s home country.

While some of the estimations were a more crude, such as the processing fee guess, which was simply the estimated subscription revenue times the average payment processor fee, most were about as good of an estimation as possible and seemed to underestimate revenue while overestimate costs.

However, that skew in estimation didn’t make cyberlocker sites unprofitable. Even by those standards, cyberlockers earn their owners a great deal of money.

Results of the Report 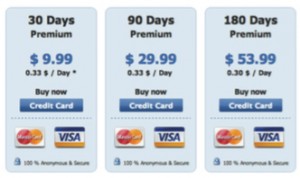 Based upon these calculations, the cyberlocker business was indeed very profitable.

Direct download cyberlockers had an average profitability of 63%. All totaled, the 15 sites brought in an estimated $63 million per year and earned an estimated $40 million profit on that.

Streaming sites, on the other hand, earned less total money, $33 million per year, but had a higher profit margin, taking in an estimated $29 million in profit creating an effective profit margin of 87.6%.

Only three sites had an estimated profit margin of less than 30% and only six were lower than 60%. However, size is clearly an advantage to these sites, all had over two million visitors per month, withe the top site receiving over 55 million visitors in the average month. It generated over $17 million in estimated revenue and, on that, earned over $15 million in estimated profit in the past year.

Other key findings in the study included:

All in all, it’s clear that these sites are making millions of dollars off of content that is, by a wide margin, mostly infringing. They are doing it with the aid of several unwitting legitimate partners, including legitimate advertisers and payment processors, and that none of the money is going back to the people who created the content involved.

There’s a common narrative around piracy-oriented sites of altruistic individuals who are “sticking it to the man” by sharing copyrighted works with everyone. It’s a veritable Robin Hood story, stealing from the rich, greedy content creators to give to the poor consumer.

Unfortunately, this study, not to mention common sense, paints a different picture.

There’s nothing altruistic about running a cyberlocker. Cyberlockers are highly profitable and by having policies that encourage the upload and sharing of infringing material, they can be much more so.

In short, cyberlockers, and other pirate sites, aren’t hoping to eliminate the middle man, they’re hoping to become the middle man. They make millions every year off of copyrighted works and pay none of it to those that created the content that earned them their visitors.

Though these sites claim to be just like Dropbox or Google Drive, the difference is evident when you look at the high amount of infringing content being shared on these sites. They deliberately foster a culture that encourages infringement and it shows in the numbers. Their primary purpose, far and away, is copyright infringement.

While the cyberlocker community was heavily blunted by the closure of Megaupload, these numbers show that running such a site is still very profitable, at least for the large players.

Even if there are issues with the calculations in the report, it’s unlikely any of the sites listed are losing money. As such, it’s unlikely anyone running these sites is doing it purely for the love of sharing information. Instead they’re running businesses that are very lucrative and staying lucrative because they don’t have to pay for the product