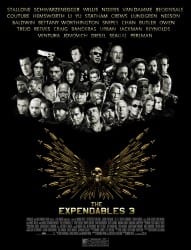 News broke last week that a DVD-quality version of The Expendables 3 leaked online, a film that wasn’t due to be released until August 15, three weeks later.

In the first 24 hours alone, the film was downloaded over 189,000 times and the number has been steadily rising.

The rare high-profile and high-quality leak has sparked a debate about the ethics and impacts of pre-release piracy. Most, including CNet’s Nick Slatt, have spoken against such pre-releases, the practical impact is much more hotly debated.

However, a study from earlier this month aims to actually address this issue. The first peer-reviewed and journal-published study to look at pre-release leaks, the researchers concluded that, on average, a pre-release leak of a film hurts its box office by 19.1%.

While there are serious limitations to this study, including that it only looks at box office revenue and not other streams (licensing, DVD sales, etc.), it shows a clear negative impact from a movie being leaked online before it is released in theaters.

However, it’s not just movies that suffer from pre-release leaks. Pre-release piracy can strike just about any type of creative work that has a gap between when it is finished and when it is released. This includes books, music, artwork and more.

So what does this mean for you? Well, we first have to take a look at the practical implications of pre-release piracy and then look at what, if anything, can be done to stop it.

The Legal Dangers of Pre-Release Piracy

Of all the types of piracy. There is little doubt that pre-release piracy is treated the most severely.

In December 2009, the FBI arrested Gilberto Sanchez, who was accused of leaking an early version of the upcoming Wolverine movie on Megaupload earlier that year. He was later sentenced to one year in prison.

Sanchez’ fate followed a similar story from 2003 where Kerry Gonzalez got his hands on an unfinished copy of the movie The Hulk and uploaded it to the Web. He was ordered to pay $7,000 in fines and restitution and was sentenced to six months home confinement and three years’ probation.

Similar arrests have also been seen in the music industry, where leakers of albums have been targeted for criminal action and as have leakers of upcoming songs.

In an age where most piracy has few repercussions, pre-release piracy is a notable exception where criminal action is routine. According to Torrentfreak, such fears caused the first pirates of the film to delay releasing it to the broader public for about ten days.

That fear is not necessarily unfounded. If The Expendables 3 leaker is caught, they will, most likely, face criminal penalties if they are available. Repercussions could be coming for anyone else involved in the leak though it could easily be months or years before we see any movement.

But why is pre-release leaks and piracy treated so seriously? The answer is because it’s probably the most damaging type of piracy one can experience.

Why Leaks Hurt So Bad

To be clear, not every artist, work or leak is the same. How piracy impacts a work is a complex equation with countless variables. An indie film will be impacted differently than a blockbuster, a highly-anticipated release will be affected differently than one with little marketing and a leak of an incomplete version is clearly different than a high-quality leak of the final product.

It is very possible that some artists, films and authors benefit from having their worked leaked while others are crushed by it. There is no one-size-fits all solution to copyright enforcement.

That being said, the reason pre-release piracy is treated so severely is because the potential danger is so much greater.

Consider the challenges that pre-release piracy brings that other kinds of piracy don’t:

But apart from the practical damage that such leaks can do, there is also an ethical element. When and how a work is released is one of the few elements of artistic control that remains in the digital age. Piracy is a reality, but most creators reasonably expect to be able to say when something comes out and how it looks when it does.

Pre-release piracy strips away that last element of artistic control, leaving the creators of the work with no say in how and when their work is viewed.

It’s generally accepted that creators should, at the very least, get the first bite at the apple on a new creation. This is true even among many who support piracy. However, pre-release piracy denies creators even that.

Understanding why pre-release piracy and leaks are so harmful makes it crucial to understand what can be done about it.

However, the truth is that such piracy is more about security than it is copyright enforcement. It’s about ensuring that pre-release copies of a work are tightly controlled and that there are no opportunities for a work to get leaked to the public.

While a lot of this comes down to working with trustworthy people, having solid contracts and not allowing access to the work, there are things that you can do to help reduce and prevent pre-release piracy.

The movie industry, by in large, has done a great job following these principles. The fact that so few movies see an Expendables-like leak (high quality with no visible watermark) proves the point. With so many major releases every year, it’s surprising that we don’t see more such leaks.

So, despite the recent problem, Hollywood is still a great role model for how to put together a major project and not have it slip out. Even if the challenge is going to get more difficult with every passing year.

Fortunately for The Expendables 3 and the people behind it, the movie will still likely do very well. The other films in the series have done exceptional, more than earning back their costs (one of the reasons we’re on the third in the series). Even a drop of more than 19% likely won’t change that for the third installment.

Instead, as pointed out by Slatt, the impact is likely greater for films and other creative works that don’t have major releases and are struggling to make back their costs as is. If a film is just hoping to break even and it suffers even just a 10% loss due to a leak, that can push the film deep into the red.

Still, this isn’t just a problem for movies. For any work where there is interest, there can be a leak. This includes an upcoming album, the next book by a famous author or even the manuscript on your laptop. All that is required is that there be interest and access.

Creators large and small need to think about how they can prevent and blunt such piracy. Even if it doesn’t happen to you, many of the steps you take to reduce or blunt the impact of a leak can help you produce better work and promote content more effectively, making them good steps in general.

So while most shouldn’t worry too much about showing an early draft of their book to a good friend, if you’re on the run up to release day, you might not want to shoot out copies to everyone you know.

A little common sense and planning can go a long way.