If you’re a designer, regardless of medium but especially for printed works, you should be following the recently-filed “Oldboy” lawsuit very closely.

While the dispute itself is not that unusual for designers, no doubt many designers will experience deja vu when learning about the history of the case, the lawsuit is and the issues it raises may provide valuable lessons for designers of all stripes.

Basically, in an environment where more and more designers are working as freelancers, without the protection of being within a company, it is becoming increasingly important that they be aware of their rights under copyright and what they can do to protect those rights.

In that regard, the Oldboy lawsuit might not only help solidify those protections, but could also provide an excellent demonstration of how to protect your work and ensure that you always get paid when it is used.

The Background: A Designer and Spike Lee 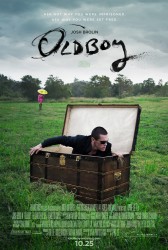 According to the lawsuit, in January 2013 designer Juan Luis Garcia began work on a series of three movie posters for the upcoming film Oldboy, which was scheduled to be released by director Spike Lee later that year.

However, according to Garcia, when he presented the posters to Lee’s team, was offered too little money for him to accept it and walked away from the deal, despite working on them for two months straight.

Then, in November of the same year, shortly before the film’s release, Garcia says that Lee began to use his posters to promote the film. However, the posters were marked as being copyright either Spike Lee or 40 Acres and a Mule Filmworks, Spike Lee’s production company.

Garcia initially responded by posting an open letter on his site (the open letter has since been removed) calling out Spike Lee. Lee, however, denied knowing Garcia. (Note: This is likely possible as there’s little evidence Lee worked directly with Garcia. Rather, Garcia worked with people working for Lee on the project.)

The story became popular on social media with many calling for Lee to pay Garcia but Lee steadfastly refused. Now, some 6 months after the open letter was published, Garcia has filed a lawsuit against Lee and others involved with the film, seeking both a share of the profits and statutory damages.

Still, at its core the story of the lawsuit, at least from Garcia’s perspective, is one that’s almost timeless among designers, the tale of clients who refuse to pay for a provided work, even as they are using it.

Why the Lawsuit is Important

While the story leading up to the lawsuit is fairly common, the lawsuit itself is not. The reason is simple: When a client/designer relationship goes bad, a lawsuit usually isn’t a viable option.

The reasons are many:

In short, graphic designers are often stuck without effective recourse, other than DMCA takedown notices in some cases, when dealing with non-paying clients.

This case, however, is the exception.

In short, it’s a rare lawsuit over a common complaint that designers have, but if that isn’t enough, the lawsuit also makes a rarely-used claim that could even further change the lives of designers.

In addition to suing for copyright infringement, Garcia is also suing for the removal and alteration of copyright management information (CMI).

I’ve talked about CMI before on Plagiarism Today including what it is and how it can be used to sue for unregistered works.

However, it is an issue that rarely comes up in actual court cases, in large part because it only applies when CMI is affixed to a work, such as a watermark on an image, and is removed or altered.

In this case, Garcia is suing Lee and his companies for altering, removing, substituting and providing false CMI in the works before distributing them online.

What this CMI is is unclear. The samples provided by Garcia in the lawsuit do not show a watermark or other visual CMI. However, he also does claim that the watermarks added by Lee and his companies is a false CMI, which is also a violation under the law.

While the inclusion of CMI in the lawsuit makes sense, it’s a rare addition to this type of case, which more commonly focuses on the traditional infringement issues rather than the CMI placed on the work.

Lessons for Designers (And Others)

While no lawsuit is a done deal and we are yet to see what Lee and his companies have to say in response, it’s clear that Garcia has put himself in a very solid position and other designers (as well as photographers, writers, etc.) could learn a great deal from him.

All in all, if everything Garcia says is true, then he is in about the best position he can be.

Right now, the case appears to be the tale of a graphic designer who did everything he could correctly and has put himself in a position to respond effectively to the alleged misuse. The registration, the copyright management information and the timing all work out perfectly for him.

It’s a lesson that other freelancers, especially designers, can learn from.

In the end though, the case will most likely be settled, one way or another. While this is good news for Garcia it does mean that some of his legal theories won’t be adequately tested.

Still, for those freelancers looking for guidance on how to best protect themselves, especially when working on big projects, Garcia did a lot of things right and, if everything he says is accurate, he is about as well-positioned as he can be in this case…