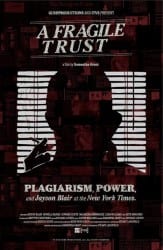 Jayson Blair is back in the spotlight as we cross the 11-year anniversary and the documentary “A Fragile Trust” has begun to make the rounds and get more press coverage.

In 2012, it was Jonah Lehrer that was the talk of the industry, with his rise and fall capturing headlines across the world.

But that only represents the major scandals. Just in the past few years we’ve seen Fareed Zakaria, Margaret Wente and many others. In fact, 2012 was such a bad year for journalism that Craig Silverman at Poynter named it “Journalism’s Summer of Sin“.

But while 2013 was fairly quiet, as has the beginning of 2014, if journalists think that plagiarism and other ethical issues are going away, they are very wrong. While it may be a while before we see another Blair or Lehrer, smaller but still annoying plagiarism scandals (like Zakaria and Wente) are still a very real possibility.

If anything, the likelihood of such scandals has increased since 2012, not gone down and the pressures that are being placed on the journalism industry are only going to exasperate the issue of plagiarism, not help it go away.

Here are five reasons why that’s the case, and what publications can do about it in advance.

Newsrooms across the country are shedding staff members as subscription rates and revenues fall. Most publications have fewer reporters and editors than they did just a decade ago.

That would not be a problem if it were not for the fact that, as journalism has become more and more digitally-focused, reporters are being asked to do a lot more work. Where in Jayson Blair’s time reporters had to turn in a few stories per week, now many are tasked with reporting, writing and editing several pieces a day.

In the age of Twitter, it’s crucial to be constantly outputting new, interesting content, not just a single batch of it per day.

While this is not an excuse for committing plagiarism, considering that countless reporters survive in this environment without making ethical breaches, it’s easy to see why those who might be tempted could start taking shortcuts.

There’s no end in sight to this trend. It’s a response to greater competition in the journalism space, not just from other publications that are no longer bound by geographic limitations, but by new sources of news, such as blogs and “new media” publications.

While journalists are pressured to do more with less, the are also getting less oversight from their editors.

Part of this is because more and more journalists are becoming freelancers. They are writing articles for various publications, often several different ones in the same day. Rather than building up a close relationship with one or two editors, they may have dozens they work with but only on occasion.

But even those still in the newsroom face challenges. Editors are overloaded and overworked just like their reporters. They have to manage more content than ever and have less time/resources available to nurture relationships and truly get involved in the work of their reporters.

Considering that Jayson Blair was able to plagiarize and lie for so long while having editors closer to him, it’s only going to get worse as that relationship grows more distant.

3. Refusal to Use Anti-Plagiarism Technology

Though journalism has a known problem with plagiarism and the risks of publishing plagiarized work has been high, adoption of readily-available anti-plagiarism technology has been slow.

The reasons for this are many, including the costs of implementing such tools during a time where many publications are already losing money and concerns about creating a mistrusting atmosphere in there newsroom. However, the implications are very serious.

While these systems aren’t perfect, they could have caught and stopped most of the famous cases of plagiarism before publication, at least preventing a public scandal.

Given the other points, it makes sense that publications would want to do everything in their power to ensure that the strains placed on reporters and editors alike don’t lead to poor quality journalism.

However, that has not been the case.

With every passing year, it gets easier and easier to find plagiarism in text works. Currently, all one has to do is find a few interesting passages, punch them into Google and then see what shows up. Even more complex anti-plagiarism tools are getting cheaper and easier to use every day.

Readers are now more and more empowered than ever to detect plagiarism in the writing they read and, given how politicized much of journalistic content has become (either intentionally or unintentionally) there’s a lot of motivation to check.

Plagiarism is a scandal that can be uncovered with nothing but a simple Google search meaning anyone with a grudge, a little bit of time and some basic skills can uncover plagiarism in any publication.

Even worse, thanks to the Web, their allegations can reach far and wide long before the editor or the reporter becomes aware of them, making it more difficult than ever to stay in front of plagiarism scandals as they unfold.

Journalism has always been an industry keen on controlled content sharing. Wire services and syndicates allow publications to avoid replicating efforts needlessly while other newspapers have routinely forged partnerships with non-competing publications swap content and better enable each other to fill their pages.

That trend is continuing but in a much less controlled manner. While partnerships, syndicates and wire services still exist and play an important role, freelance reporters now often license stories to papers rather than sell them. This means stories can appear in multiple publications and the rules of this cross-pollination aren’t always clear.

Some publications don’t include bylines, others list the work of others as merely being that of a “staff reporter” or a “freelance reporter” while most will still list the reporter’s name. But even when bylines are included they aren’t always clear and prominent with many burying the author information in small font or at the bottom of the work.

Considering that, depending on the subject a work can be resold for days or weeks after first publication, uses that look a lot like plagiarism but aren’t can happen down the road.

But then there are thorny issues such as self-plagiarism, which were the first allegations filed against Jonah Lehrer, only complicate matters more. Can a freelance reporter reuse their work elsewhere without expressly stating as such? When can a newspaper reuse their own words in new reporting? These are complicated but important questions exasperated by the Internet.

While they are important to answer, no one wants to be the test case as there are going to be a lot of unpleasant conversations before any kind of consensus is reached.

Journalism, right now, is at a very strange time. Ethical issues, including plagiarism, are on the rise and the climate is doing nothing to help reduce or mitigate those issues. If anything, they are making them much worse.

The time for publications to get in front of the plagiarism issue is now. When the next scandal breaks or plagiarism is otherwise in the spotlight it will be too late.

Right now an opportunity still exists to be proactive of the issue and to be forward-thinking. At some point, any action will merely be reactive and the damage will already be done.

However, given the condition that the industry is in, it seems unlike that it would be able to adequately address these issues even if it were willing. The industry is already slowly losing one war and doesn’t wish to open up another front in a different battle.

But in reality, they are the same battle. If journalism, meaning traditional journalism, is to survive the next 50 years, it will do so on the back of its reputation. The quickest way to undermine that reputation is with ethics scandals, like plagiarism scandals.

Unfortunately, that is exactly what will likely happen if the industry isn’t careful and doesn’t start paying greater attention to these issues.