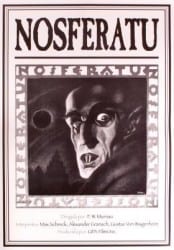 Though the slip up that caused Night of the Living Dead to lapse into the public domain is most likely the best-known case of copyright affecting horror movies, it is far from the only nor is it the first.

The truth is that copyright has been creating havoc with horror movies for as long as there have been horror films, all the way back to at least 1922, when the estate of Bram Stoker, the author of the original Dracula novel, took an upstart video company that made an unlicensed adaptation of the book.

This battle not only helped shape horror movie history, but it is also something of a vampire tale unto itself. After all, it’s about a movie that managed to resurrect itself, literally coming back from the dead, and then casting a spell on the living.

In many ways the story of Nosferatu the movie mirrors closely it’s protagonist though, unlike Count Orlok, it hasn’t turned to ash when exposed to sunlight.

Driving a Stake Through Nosferatu 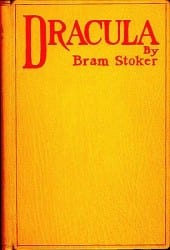 Film producer Albin Grau originally got the idea to shoot a vampire movie in 1916. Serving in Serbia during WWI, Grau was inspired to make a film about vampires after speaking with local farmers about the lore.

He and Enrico Dieckmann founded the company Prana Film and set out to create the movie, even hiring screen writer Henrik Galeen and director F. W. Murnau to bring the vision to life.

Grau, however, hit a major snag. He had wanted to do a expressionistic retelling of the story of Dracula but the estate of Bram Stoker, spearheaded by his widow, Florence Stoker, would not sell him the rights. Though the book was already in the public domain in the U.S. due to an error in copyright notice (similar to the one that caused Night of the Living Dead to lapse 45 years later), in Grau’s native Germany, which was already a signatory to the Berne Convention (The U.S. would not sign until 1988), the work would not lapse until 1962, fifty years after Bram Stoker’s death.

Undaunted, Grau pressed forward with the film and it started production in 1921. However, several changes were made in the movie in a bid to duck a copyright lawsuit. The name of the movie was changed to Nosferatu, the main character’s name was changed to Count Orlok and the plot itself received many tweaks and modifications.

Unfortunately for Grau, those changes were not enough to avoid a lawsuit. Shortly after the film’s debut in 1922, Bram Stoker’s estate filed suit claiming the film was an infringement. Since early versions of the film still included the Dracula name, proving the derivative nature of the work was not difficult and Grau was forced to both declare bankruptcy and close Prana Film, making Nosferatu the company’s only release.

Worst of all for film lovers was that the judge ordered that all copies of Nosferatu be destroyed. It seemed that the movie was destined to die a very quiet death and it almost certainly would have, if not for one piece of amazing fortune.

Rising from the Ashes 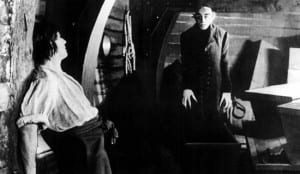 The court’s order was followed with amazing thoroughness. All prints of the movie were destroyed, that is, save one.

One print found its way to the United States. Since Dracula was already in the public domain there, there was no way to have a U.S. court order its destruction.

It is from that print that every copy of the film existing today was made.

The film slowly began to gather an audience in the U.S. and, by the 1960s, had earned a place as a horror classic. By then, Dracula was in the public domain worldwide and Nosferatu could be shown freely (though the film itself was protected by copyright in many locations, once again though, not the U.S.).

More importantly though, Nosferatu is the first vampire film that is known to have survived into the modern age. As such, it set many of the templates and rules for the films that would follow, including changing some of vampire lore forever.

The Impact of Nosferatu 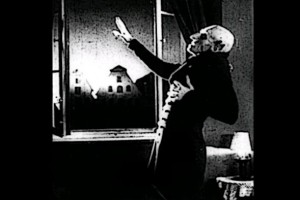 Though its clear that Nosferatu is a close retelling of Dracula with different character names, the movie made many changes to the story, some for budget reasons but most for copyright reasons.

The biggest change was the ending of the movie. In Nosferatu, Count Orlok is burned up by the sunlight. However, in Bram Stoker’s version, sunlight was harmless to vampires, it just weakened them slightly.

However, this idea of vampires being killed by sunlight has been used over and over again in various movies, including many carrying the Dracula name. The theme has become so common that, in the more-accurate 1992 movie retelling of the book, a narrator has to explain why Dracula can walk in the daylight for a crucial scene.

Another difference is that a bite from Orlok does not create a new vampire. Rather, Orlok merely kills his victims. This theme too would be adopted by later films, which focused less on the “curse” element of vampirism and often gave vampires a choice as to whether or not a victim would live as a vampire or perish (IE: Interview with a Vampire).

Other changes, however, didn’t catch on. For example, Orlok is an misshapen monster with fangs in the side of his mouth, making him almost appear animal-like. This is in stark contrast to Stoker’s Dracula, which is a suave, sexy and aristocratic womanizer. This paved the way to largely abandon the Van Helsing plot of a vampire hunter and leave room for the story’s women to fight back, one eventually sacrificing herself to kill Orlok.

Still, many of Nosferatu’s changes went on to become canon for vampire movies, even though they went against the story it was based upon.

In the end, it’s amazing how many elements of modern vampire lore came not from an attempt to write a better vampire tale, but rather were a failed attempt at avoiding a copyright infringement lawsuit.

Without those changes, vampires might never have been thought to be vulnerable to sunlight or able to kill their victims.

Imagine, for a moment, if Bela Lugosi and Christopher Lee had not donned the cape? Nosferatu kept the interest in Vampires and Dracula alive until 1931, when Lugosi first played the role and helped ensure that we would have a steady stream of vampire movies from then on.

In the end, though it’s the later Draculas that would become better known, it’s likely none of them would have ever done so if it hadn’t been for this copyright infringing film that managed to stay alive with a stake through its heart.