Earlier this month, Digg announced that they were killing off the Diggbar, calling it “Bad for the Internet“.

The controversial tool, which got its start almost exactly a year before, caused a storm of accusation of content theft as it placed a frame above sites it linked to, both adding a Digg logo and other Digg elements, but also redirecting the content to a URL on Digg’s domain. Though Digg made changes to mitigate those concerns, many of them remained until the pending demise of the bar was announced.

However, even as the Diggbar was stirring controversy and, eventually, dying. Another popular URL shortener was doing much the same thing. Hootsuite, the makers of the popular Twitter clients, used a very similar method with its popular Ow.ly URL shortener.

Today, Hootsuite announced that the social bar at the top of Ow.ly URLs are disappearing and those links will, instead, just forward on to the original URL, as with other shorteners.

However, there is a catch. Hootsuite is also starting up a new URL shortener, Ht.ly, that will continue to use the social bar and Hootsuite users will have the choice between the two services.

The question is whether this will appease those upset about the social bar at all and, if so, what the thoughts will be on the new Ht.ly shortener. 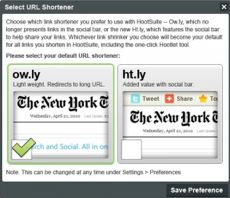 The reason content creators are upset about services like the Diggbar and Ht.ly is because framing hurts the original site owner. Not only does it come with potential trademark, copyright and Tortious interference with Business Relationships, all which were raised in the case Washington Post v. TotalNews. (Note: That case was settled out of court.)

But more to the point, content creators object to the fact that such framing creates two URLs for the same content. This can cause confusion for both the search engines, which often pick up the shortened URLs instead of or in addition to the original, and users who may share the shortened link instead of the original. This can hurt a site’s search engine optimization and overall promotion efforts.

While it is unclear if this framing is illegal, the theories mentioned above have never been tested, it is clearly very unpopular with Webmasters and that is why the transition to using both Ow.ly and Ht.ly doesn’t alleviate these concerns. It isn’t the people making the short URLs who are most affected by the change, but the creators they are linking to.

While giving users the choice would make sense if they were only posting their content, URL shorteners are used to share links from all over their Web, including those belonging to people who might object to the framing. In short, the move only shifts some of the responsibility for the framing from Hootsuite to its users. It may alleviate the pressure on Hootsuite, but it does not solve the problem.

The good news is that, even though it isn’t the best possible announcement, the news overall is good. There will be less content framing over all and it will be interesting to see how many users pick the frame versus the redirected version.

Still, it does seem Hootsuite is dedicated to this idea of framing, at least with some of its URLs but has at least decided to let its users choose. Hopefully the users will choose well, at least when it comes to using other people’s content.

For those who aren’t satisfied, there are still plenty of other great URL shorteners, including the ubiquitous Bit.ly, which redirect to long URL in a way that ensures search engine recognition is passed on and users only use the shortened URL when necessary, such as with Twitter.

URL shortening may be a necessary evil now, but there is no reason to make it more harmful than it has to be, especially for content creators.