In May I covered C-Registry, an orphan works prevention service that is working to create a registry of images and other visual content on the Web as well as give visual artists a means to both locate their work on the Web and ensure that anyone who finds it will know who they are and how to correctly license it.

Though my review was overall very positive, I noted that the site had several potentially serious limitations, most notably that the service could only match exact images, meaning that any modification (cropping, recoloring, etc.) would prevent an image from being correctly identified and likely make it an orphan again.

Well, last week C-Registry announced a series of upgrades to its service, including aforementioned exact matching problem. Here’s a quick rundown of the biggest enhancements. 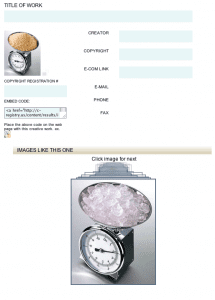 Where previously C-Registry needed an exact match of an image to find the original, it now also provides a collection of similar images for the user to search through . These similar images are displayed in a system somewhat similar to Mac’s Coverflow feature (see example right) and the user just clicks the displayed image to see the ones behind.

Though this system confused me at first, I’m more used to a mouse click opening up the image than moving to the next one, it works relatively well and the matching, from the limited samples I was able to see, seemed to do a decent job, catching a variety of changes to the image including sizing, color and more. As you can see in the example, it detected a different version of the scale image, one where the bowl is filled with ice instead of the brown sugar.

What is interesting about this system is that, according to their press release, the technology can also work on video and audio as well as it is truly pattern matching, not image matching. This could make it very useful to a broader audience as the service expands.

In its current form though, this system seems to be very effective and it addresses one of the major holes with the service.

Previously, images could only be uploaded one at a time. C-Registry has fixed this problem by adding a pair of bulk upload options, one using a desktop application and the other through a bulk upload process where the rightsholder uses a CSV file with the information about each image the URL of the file and the system takes care of the rest.

Though this is something of a catch up feature, most registries offer some form of bulk upload, at least behind the scenes and is not likely to be useful for most smaller rights holders, larger ones, such as newspapers, stock photo agencies, etc. will greatly appreciate this feature since the information is, most likely, already in some form of database and can be easily exported.

At this time, bulk uploading is limited only to authenticated accounts, which costs $25 per year.

Though this is certainly a minor upgrade to the service it is very helpful when trying to use the site and gives a glimpse at features only available to paid users without requiring a user to put up any money.

In the end, this is just one of the obstacles the site has to overcome to become a major image search database to locate and identify orphan works. It still has to solve the “chicken and egg” problem of getting enough images to warrant searching through (something it hopes to handle through partnerships with stock photo agencies) and the site itself could certainly use a visual and technical refresh (I could not stay logged in during my testing).

However, it is clear that the site is gaining some traction and that the backend technology is starting to come together. Their system of fingerprinting, not storing, files has made it possible for them to build a very large database with a relatively small infrastructure and the technology seems to be working very well. Hopefully they can continue to build upon this and grow their service.

In short, there is a ton of potential here, even more so now, but there is still a lot of work to be done, something I think the admins know very well.