Content monitoring company Attributor, announced a new initiative yesterday, entitled the Fair Syndication Consortium, which it hopes will revolutionize the way publishers of all sizes deal with content reuse by turning copyright infringement and plagiarism into a profit center.

The consortium hopes that, by working with advertising companies, they can redirect a percentage of revenue from sites that use content without permission. This will, in theory, reduce the amount of DMCA notices filed and will content copying and redistribution rewarding for both content creators and for those performing the distribution.

However, the idea is in its very early stages and there are many questions surrounding the details of the project and how exactly it will work. But even at this early stage, Attributor and the consortium already has many in the publishing field speaking glowingly about the possibilities of what it could do.

How It Would Work 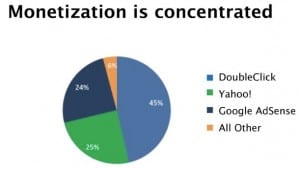 The idea behind the consortium is fairly simple. Attributor hopes to get together a large collection of publishers of all sizes and sign them up for the group. They will track the content of the members using their existing technology, which includes FairShare, focusing specifically on cases reuse is clearly more than a fair use of the work involved and is displaying advertisements.

They will then turn to the advertising distributors, such as Google Adsense, Yahoo! and Doubleclick and ask them to give a percentage of revenues from that page to the publisher that created the content. Then, the consortium will function much like ASCAP does in the music industry, collecting and distributing royalties to its members.

Though the TechCrunch article focused heavily on spam blogs, this would be targeted primarily at regular blogs that reuse content without permission, which, according to Attributor, makes up the bulk of the reuse for most publishers.

The benefit of this system is that the people who copy the content would not have to pay anything for the use, the “royalties” would be deducted straight from their advertising earnings, and publishers would have every motivation to encourage the copying and redistribution of their work. This would likely reduce the number of takedown notices filed and cut back on the need of publishers to monitor the Web for their content.

The question, however, is whether publishers, advertising networks and the customers of advertising networks will go along with it in any meaningful way. Though the announcement is important, it is clear that there is a lot of work that lies ahead for everyone involved.

Publishers of all sizes who are interested in the system can currently join the Fair Syndication Consortium for free. However, since much of the groundwork is yet to be laid out no revenue is being earned. Members will be updated on happenings around the consortium, invited to join meetings and invited to comment on various proposals.

It is clear that the Fair Syndication Consortium has the potential to revolutionize the way content is used and the way it is monetized. The questions is whether it can achieve its very lofty goal.

My first thought when I read about the Fair Syndication Consortium was one of skepticism. The idea of bringing together publishers to change the behavior of search and advertising companies has been done before, albeit with a different topic.

The Automated Content Access Protocol (ACAP) is an update of the robots.txt standard that would give publishers much more control over how their content appears in the search engines. However, despite a very lengthy list publishers (PDF) that have actually implemented the system, no major search engine accepts the standard, even after nearly two years of lobbying.

However, the Fair Syndication Consortium does have at least one advantage over the ACAP protocol in that no law forces Google to follow a new robots.txt standard but it could be argued that copyright law forces ad networks to remove ads from infringing sites (Note: The DMCA does not actually cover advertising providers in any way, just hosts and search engines). As such, if ad networks don’t cooperate, one could always file copyright notices to seek the removal of the ads.

Regarding the premise of the consortium, overall, I like it. I think the big idea is a solid one and, if Attributor and the publishers can overcome publisher/advertiser apathy on this topic and implement the system, it would be revolutionary.

For that reason, I joined the consortium and am interested in seeing what they achieve as well as the opportunity to participate in the dialog. That being said, I am not expecting a great deal of money from this, at least not from Plagiarism Today, as my FairShare feed shows that very few sites have the courage (or stupidity) to scrape more than just a few words from the feed.

However, there are still a lot of details for the group to iron out. Here are just some of the initial questions and hurdles that I see.

These questions haven’t been answered and really can’t since the consortium is so young and so little is set in stone. However, that is exactly why publishers, large and small, should consider joining now, to help fill in the blanks.

If you are a publisher, of any size, and like the general idea of what the Fair Syndication Consortium is trying to do, then I encourage you to sign up now. Even if you have concerns or issues, it is a rare chance to participate in and follow what could be one of the most important dialogs in content reuse on the Web.

It is free to join and it gives you both a front row seat to and a voice in an extremely important negotiation, there really isn’t much more to it.

Even if the consortium were to completely “fail” and never share a single penny in revenue, the conversations it will hold with publishers and advertisers have the potential to set the stage for how the issue of content reuse is addressed for years to come. It is better to be a part of that than to watch it from afar.

For publishers, including bloggers, this could be a rare opportunity to shape the future of the Web. I’m happy to be a part of it, albeit in a small way, and I certainly hope that other small to medium-sized publishers will join me, especially since there is no cost to join.

Disclosure: I have consulted for Attributor.