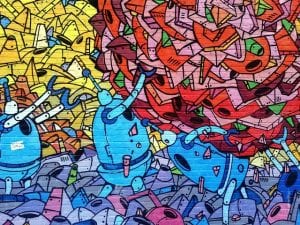 When graffiti artist Jason Williams, better known as REVOK, noticed some of his work appearing in an ad campaign for H&M, he did what many artists would do: He sent a cease and desist letter.

H&M, rather than ceasing and desisting, responded by filing a lawsuit against Williams saying that his work can not be copyright protected. According to H&M, since Williams’ art is a “product of criminal conduct” Williams has no copyright at all in the work.

However, this isn’t the first example of graffiti artists battling over copyright. Whether its artists suing over the destruction of 5Pointz in Queens, the estate of another artist suing McDonalds over the use of his tag in a restaurant or another suing when their work appeared in a fashion line.

Much of this is owed to the fact that street art has been pushing its way into the mainstream. Though the process has been going on for decades, in recent years artists such as Banksy and Shepard Fairey have become household names. With mass appeal comes inevitable commercialization and that commercialization has forced many graffiti artists out of the shadows and into the courtroom.

But this raises a difficult issue: Where does graffiti fall when it comes to copyright? Can it be protected at all? If so, what can artists do to prevent the destruction of their work? What about commercial use of their work?

The answers are difficult and many are still being decided but, given how important this area is becoming to copyright law, it’s well worth taking a look. 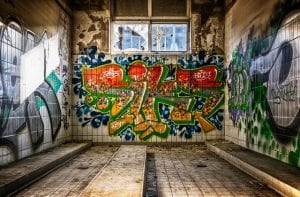 When it comes to this kind of art, there are three terms commonly used to describe it: Street art, graffiti and vandalism

For the purpose of this article, street art is an umbrella term for nearly all public art, permitted and illicit. This includes commissioned murals, graffiti and even public art displays.

Graffiti is simply illicit public art, usually in the form of spray painted murals writing or drawings. It can be extremely simple or complex, but they don’t have advance permission from the property owner, even if they are welcome after the fact.

Finally, vandalism is any willful destruction of property. Many people consider graffiti vandalism, many do not. We’re going to avoid this term for this reason.

With that aside, we can delve into the issues.

Can Graffiti Be Copyright Protected?

Copyright law is pretty clear. For a work to qualify for copyright protection it only needs two things:

Interestingly, the law even includes the word “any” in its language, further emphasizing that the term is meant to be as broad as possible. 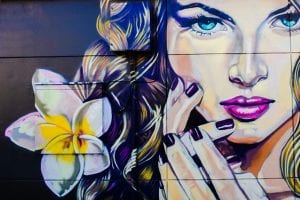 Graffiti, without a doubt, meets both of those qualifications. It is creative and a wall, whether it’s legal or not, is a tangible medium of expression.

The argument against copyright protection for graffiti comes from a very different angle.

When the fashion designer Moschino and their creative director Jeremy Scott were sued by street artist Jeremy Tierney (AKA: Rime), they argued it was the criminal nature of graffiti that made it devoid of copyright protection.

One case that addressed this (at least briefly) was Villa v. Pearson Education, where a graffiti artist, Hiram Villa, sued Pearson Education over the use of his art in a strategy guide for a Tony Hawk video game. After some procedural issues, Pearson attempted to get the lawsuit dismissed by claiming the illegal nature of the work made it ineligible for copyright protection.

The judge declined to do so, saying that the illegality of the art was fact-dependent and not appropriate to address at that stage. Unfortunately for those interested, before the court could rule on it, the two sides reached a settlement.

To make matters even more frustrating, the same happened in Tierney’s case. There, just as with Villa, we didn’t get to hear from the courts as both sides reached a settlement in the case shortly after the argument was made.

Other cases, however, didn’t feel the need to deal with copyrightability at all. For example, in a 2013 case involving graffiti appearing in a Green Day concert video the Ninth Circuit Court of Appeals found that the use of the art was a fair use. While that’s still a defeat for the artist, one can’t find fair use if the work is not protected by copyright.

Still, the issue is a divisive one. However, as time has moved on artists have, generally, been more and more successful in enforcing copyright in their work. To quote an article by Sara Cloon for the Notre Dame Law Review:

“These cases reveal that courts tend to analyze cases regarding unsanctioned graffiti on the premise that such works are copyrightable, though they have not held explicitly that such works hold valid copyrights. They have focused on copyright defenses in dismissing causes of action, rather than the defense of illegality.”

The article goes on to say that “This widespread judicial approach gives weight to the argument that unsanctioned graffiti is copyrightable.” This, by in large, appears to be the prevailing thought at the time, even if no court has said it expressly.

What About Destroying Graffiti?

Even if we wholly accept the copyrightability of graffiti, that doesn’t mean it receives all of the same rights as other forms of street art.

One example of this is the Visual Artists Rights Act (VARA), which is the United States’ attempt to introduce elements of moral rights into copyright law. One of the components of VARA is that author of works of “recognized stature” can prohibit intentionally or grossly negligent destruction of their work.

However, courts have not been kind when applying VARA to graffiti.

Two cases, English v. BFC & R East 11th Street LLC and Pollara v. Seymour found that VARA did not apply to illicitly placed works of art. However, they made a distinction between removable and non-removable, hinting that, if a work can be trivially removed, it can’t be destroyed even if it was placed illegally.

The latter case also looked at the issue of whether or not illegally-placed artwork is “of a recognized stature” and, ultimately, found that it was not as it “was not intended to have any lasting value.”

Many will point to the 5Pointz case, where a judge awarded a collection of artists $6.7 million for destroying their creations ahead of a planned demolition. However, the 5Pointz case isn’t a case about graffiti, the museum was created with the permission of the property owner. While it was certainly street art, it wasn’t graffiti.

Furthermore, the judge said the reason for the high damages was because the developer had acted willfully. If the developer had waited until they received a demolition permit, 10 months later, the case might have ended very differently.

That’s because, even if we accept that graffiti is entitled to full protection under both copyright and VARA, the rights of artists have to be balanced against the rights of the property owner.

In short, it’s probable that graffiti will always be vulnerable to destruction. However, that temporary nature is something that’s very much a part of the ethos of graffiti as an art from. The problem is that it’s going to clash constantly with the the increased commercialization graffiti, and all street art, are seeing.

However, the mainstream success of graffiti has brought it commercial success and, where there’s money there’s litigation.

Many of the issues surrounding graffiti and copyright remain unsettled and may still be for some time. Settlements are easier and cheaper than wading through murky legal waters.

Still, these issues won’t go away. As long as there’s a drive to commercialize graffiti, there will be copyright issues. So expect a lot more from this area over the coming months and years.