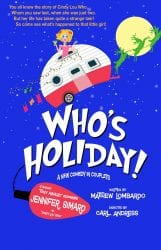 Every year at the holidays I try to do something special. Whether it’s pointing out Christmas copyright myths or public domain songs. This year I wanted to expand the Plagiarism Today Holiday Collection with something new (except for the time I did it in 2010), a poem.

This year’s poem is a retelling of the Who’s Holiday case, which pitted the estate of Dr. Seuss against a small play that was parodying the iconic How the Grinch Stole Christmas.  The writer of the play won the case, getting the green light in September. Since then the play has been well-received and the performance is slated to go through the end of December.

To be clear, I don’t think the Seuss estate is as horrible as this poem would indicate. Though they were very wrong in this case, I certainly respect them and the work they protect. This is meant to be all in good fun.

How the Seuss Estate Stole Christmas

Every Who down in Whoville liked parody a lot
But the Seuss estate, who controlled the Who’s copyright, did not!
The estate hated laughter, for whatever the reason
Mocking the Suess characters, why that was high treason!
It could be the glint of their coin was a little too bright
Or the toupee on their lawyers were a bit too tight
But I think that the most likely reason of all
May have been that their funnybones were two sizes too small.

Whatever the reason, their bones or toupees
The estate stood there hating, HATING Who’s Holiday
Staring from their office, with a deep furrowed frown
They watched in horror as this play mocked and clowned
For they knew every ticket sold and unsheathed
Meant dollars and license fees passing through their teeth
“They’re mocking our character,” they said with a sneer
“This Cindy Lou Who is vulgar, this play is a smear!”
Then they growled, their fingers nervously drumming
“We must find some way to stop this play from coming!”
For soon they knew, there’d be a Cindy Lou Who
Who swore and smoked, and drank all the booze
The play was to run through all of December
And even make jokes ‘bout the Grinch’s member
But when the play closed, they’d do something they liked least of all
They’d pay no royalties, not one cent of their haul
They’d keep all of their cash, no license redeeming
And that made the estate start screaming
And they screamed! And they screamed!
SCREAM! SCREAM! SCREAM!

And the more they pondered about the profit it’d bring
The more the estate thought, “We must stop this whole thing!”
“For sixty years we’ve protected this cash cow.”
“We must stop this play from coming. But how?”
Then they got an idea! An awful idea!
The estate got a wonderful, awful idea!
“I know just what to do!” the estate began to gloat
“We’ll have our lawyers draft a little note!”
They chuckled and clucked, “What a neat little trick!”
“With one little letter, we’ll end this play quick!”
They wrote and they wrote, they made not a sound
“Cease and desist!” it insisted, “Or we’ll burn this place down!”
With a stamp and a mailman, the letter was soon sent
And into the darkness their legal threat went

Down at the theater, rehearsals were planned
Sets were designed and the cast was at hand
But when the latter arrived the manager hissed
“Stop everything! It’s a cease and desist!”
The sets were destroyed, the marquee was winched
Until nothing was left, not even an inch
There would be no play, no vulgar Cindy Lou Who
And there was nothing it seemed the creators could do
With the play all in tatters, the estate brimmed with glee
“There will be no Who’s Holiday tickets underneath Christmas trees”

But, as they celebrated the closure and the victory thereof
There came a small sound, like the cooing of a dove
It was a lawsuit, from out of the blue
The writer of Who’s Holiday had decided to sue
But you know that estate, so smart and so slick
They thought up a response and thought it up quick
“My friends, this play is a sequel!” they said
“It is merely derivative, as it was born and bred!”
“We cannot allow this infringement to premier”
“For it is an affront to everything copyright holds dear.”
But the writer was undaunted, he responded and pled
“There’s a ruling that, perhaps you haven’t read”
“There once was a show called Company Threes”
“And a play that lampooned it by the name of 3C”
“The rightsholders sued and wouldn’t shut up”
“Until a court decided they needed to let up”
“Our play is like that one!” they preached to the choir
“So please let us open or we’ll all have to retire!”

The judge remained quiet, as silent as a mouse
Not a clue was given to those in the courthouse
But when the judge did speak in a ruling so thick
He sided with the writer and his baudy shtick
“There is no confusion” the judge began to write
“Seuss is all saccharin, while this play is pure spite”
Free speech and confusion were the issues to weigh
And, in the end, fair use won the day

The estate hadn’t stop the play from coming! It CAME!
Thanks to fair use and one judge it came all the same.
And the estate, as they trudged through the snow
Stood puzzling and puzzling: “How could it be so?”
The sets were rebuilt, there was no time to waste
The new performance would open on November twenty-eight
With a raunchy Cindy Lou Who, drugging and boozing
And the estate watching idly, doing nothing but boo-hooing
But as the estate turned away, unable to look
They asked themselves one question
“So are we still stopping that Star Trek book?”