Known for being extremely tough on criminals, Clarke has drawn controversy for everything from deaths in his jail, including one where water was withheld from an inmate, his strong support for mass-incarceration, his views on Black Lives Matter and anti-LGBTQ statements among others.

However, Clarke, who is often referred to as “America’s Sheriff” or “The People’s Sheriff“, was thrust deeper into the national spotlight when he claimed that he was being appointed to a position at the Department of Homeland Security (DHS). DHS is yet to confirm this appointment.

But Clarke’s story took an unexpected turn when CNN reporter Andrew Kaczynski published an article accusing Clarke of plagiarism in his 2013 master’s thesis entitled “Making U.S. Security and Privacy Rights Compatible”. The article accused Clarke of, on at least 47 occasions, using text verbatim from sources that, while cited, the text was not indicated to be a quote.

The Naval Postgraduate School, where the thesis was submitted, has pulled down the thesis pending an investigation.

Clarke, for his part, has staunchly denied the plagiarism. In one tweet he called Kaczynski a “hack” and, in an email to the Milwaukee Journal Sentinel he said, “Only someone with a political agenda would say this is plagiarism.”

This @CNN hack @KFILE oppo research MO is to accuse plagiarism. I'm next. Did it to Rand Paul, Monica Crowley et al. https://t.co/KgoHKermpe

So, this begs the question: Is this plagiarism? If so, how serious is it? Let’s take a deep dive into the allegations and see what actually happened. 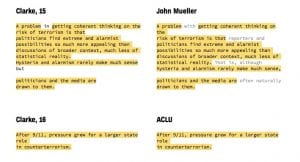 The original CNN article outlines dozens of instances where it claims Clarke copied text verbatim or near-verbatim from other sources but failed to indicate that he had copied anything.

The sources involved vary wildly. They include newspapers, government reports, political groups and other research papers. The passages themselves also vary wildly, including passages that are just a few words in length to those that include whole paragraphs.

However, the vast majority of the cases are still ones where it’s clear that Clarke copied text from the sources and failed to either adequately paraphrase the copy or indicate that it’s a quote.

To that end, this is where this story takes a twist. In every case listed, Clarke did cite his source. However, he failed to indicate that the copied text was quotes and, instead, presented it as his own writing.

This is in direct contradiction to the cleanroom writing technique that I encourage and to the guidelines of the Naval Postgraduate School.

What this means is that there’s no real way this isn’t plagiarism, the question left is over the severity of it and that one is far more difficult to answer as nearly everyone will have a different view.

Given the spate of plagiarism scandals that have happened over the past few months, it makes sense to try and find one to compare and contrast it to.

To that end, the one with the most similarities is Monica Crowley, who was being considered for the position of senior director of strategic communications at the National Security Council.

The similarities are pretty striking. Crowley as originally accused by the same reporter, Andrew Kaczynski, of plagiarizing passages in her book. However, attention quickly shifted to her dissertation, which also contained passages lifted directly or nearly-directly from the sources cited.

Its the same type of plagiarism in a similar type of academic document. The biggest difference is that Crowley was accused of plagiarizing significantly more text in her dissertation and the individual passages of copied text were much larger.

Still, this doesn’t change the fact that we’re discussing what is likely themost  important document Clarke has ever written. It’s the document that he earned his highest degree on and a document directly related to homeland security, the job he is seeking.

Lazy writing and poor paraphrasing may seem like trivialities and, in many cases they are, but everything about this case magnifies those errors.

Compare that to the Neil Gorsuch case, where the location of the alleged plagiarism, a book, made the allegations less serious. Plagiarizing in academic paper, at least from a political standpoint, is simply a more serious misstep.

Clarke, and his allies, would be wise to do the same.

Instead, they have gone on the offensive calling Kaczynski a “hack” or calling the story a “joke” rather than addressing the substance of the allegations.

But the attacks don’t change a simple fact: This is plagiarism.

While there are legitimate arguments to be had about the severity of the plagiarism, even among academics, it doesn’t change the fact that the most important document Clarke has written contains unoriginal and uncited text.

While this might not be a severe enough case to revoke his degree or derail his political aspirations, it’s definitely enough to warrant a real response and that’s not something we’re getting.

To be honest, I have fatigue from the recent string of plagiarism scandals.

Most have turned out to be either relatively minor, such as the Neil Gorsuch case or the Betsy Devos case, or just oddities, such as the press release plagiarism case and the “copycake” case.

However, the one case that did alter the trajectory of a political figure was the Monica Crowley case. When it was just her book, the administration seemed to brush the scandal just aside. Once it became her dissertation, the tone changed and she declined to take the position.

For a U.S. politician, plagiarizing in an academic paper is simply more serious and that’s true regardless of party. Both former Vice President Joe Biden and former Senator Joe Walsh had campaigns end because of academic plagiarism allegations.

While this might not need to be as dire for Clarke, the case does warrant a serious response and the lack of one is what I find most disturbing. Whether or not Kaczynski’s work is partisan, the evidence is clear and its obvious the school agrees this deserves a closer look

Ignoring it and treating it as just another political attack does an injustice to the degree that Clarke obtained and to the other students who obtained it.

A moment of contriteness and honesty could make a great deal of difference in how this scandal is viewed. Unfortunately, Clarke seems to be anything but contrite at this time.