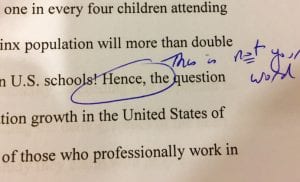 Note: This article deals with an incident that is uncorroborated as of this writing. However, the incident does highlight a very real challenge facing plagiarism enforcement and a larger problem that is well worth discussing.

Last week, Tiffany Martínez, a Latina student at Suffolk University, posted a blog entry describing how she found herself accused of plagiarism.

According to Martínez, she received back a paper she had written, a literature review, and the processor had circled the word “Hence” and written out “This is not your word.”

The instructor went on to say that that she needed to, “Go back and indicate where you cut and paste,” indicating that he or she felt Martínez had plagiarized the paper.

Though Martínez isn’t facing punishment or investigation for the alleged plagiarism, the incident has been deeply troubling for her. As she said in her post:

“In front of my peers, I was criticized by a person who had the academic position I aimed to acquire. I am hurting because my professor assumed that the only way I could produce content as good as this was to “cut and paste.” I am hurting because for a brief moment I believed them.”

Her story not only speaks to the damage a false allegation of plagiarism can do to a student (or anyone else), but it also raises a difficult question about how racial bias, even unconscious bias, intersects with plagiarism.

While it’s important to note that the story is uncorroborated at this time (neither Martinez nor the school have named the professor) and there has been no outside confirmation of the incident,  the school has ordered microagression training for all faculty in response to the incident.

And the reason is clear. While, the motivations of the instructor are their own, he or she felt Martínez was not capable of using the word “hence”. Judging from the instructor’s language, it’s almost certain race played a key role.

But while it would be easy to dismiss this as an isolated incident, it clearly isn’t. As the story has gained media attention, many other minority students have come forward with similar stories, including a black commenter who got an “F” on a paper without evidence they had plagiarized.

It’s very clear that minority students, in many classrooms, are facing unfair and undue scrutiny for plagiarism. This is damaging not only to their academic prospects, hurting grades and academic records, but also damaging to their love and interest in academia and learning in general.

Addressing this won’t be easy, but it is crucial to do so to ensure that all students get a fair chance to thrive.

Plagiarism detection technology, like most tech, is colorblind. Turnitin, CopyScape and other detection tools can’t tell what race the author of a paper is. They just look to see if the text matches something in their database.

Unfortunately, humans are deeply flawed creatures at times. We bring to the issue our own biases including racial, gender, socioeconomic and so forth. If unchecked, these biases can cause instructors to see plagiarism where there is none or overlook plagiarism that does exist.

It’s especially easy for these biases to hide in the discussion of plagiarism for two reasons:

The latter, almost certainly, is the problem faced by Martínez’s instructor as described by Martinez. While intuition can and should guide plagiarism investigations. There’s a vast difference between looking at one student’s writing or the writing within a paper and looking at the writing of a whole race, gender or other large group of people.

Simply put, spotting the warning signs of plagiarism requires a strong intuition but, in some cases, that intuition can be deeply flawed.

Unfortunately, as long as we are human, we can never rid ourselves of our biases and, in some cases, those biases will be horrible.

To further complicate things, there’s no way to remove the human component from plagiarism detection. Computers can do amazing things, but humans have to decide when to use them and what the reports computers produce mean.

In short, bias will always be a problem in this field.

However, what we can do is create policies and procedures to defend against those biases and we can implement them at an institutional level.

When developing those policies, there are four questions that need to be addressed.

The process can not be considered equitable when one or more groups of people have a different experience than their peers.

Setting up anti-bias policies and enforcing them is the first key. The second, however, is to decrease the power of any one person’s biases in the equation.

The Power of the Second Opinion

One of the most important tools in crafting these policies is the second opinion. The more opinions and the more diverse the opinions received on a case, the less likely it is that the biases of one person will interfere.

When dealing with plagiarism, as well as other academic integrity issues, it’s crucial that no action be taken, even simply raising the issue with the student, without multiple opinions.

While it’s tempting to say that approaching a student about concerns is not a punishment, as Martínez’s case shows, it is. Even if Martínez’s grades are not hurt and she never suffers on her academic record at all, it still had an impact on her personally and that impact should not be taken lightly.

Simply put, a policy that encourages and requires discussion and dialog about plagiarism issues not only gets better results overall, but helps keep personal biases in check. However, it’s something that far too few schools do.

In the end, the people who are deciding what is and is not plagiarism will never be perfect. That is why we have to set up policies and procedures that recognize and address that imperfection.

No system will ever be 100% fair, but through careful consideration we can and should improve.

This is especially true since the groups that are most commonly impacted by instructor bias are also the ones already at the greatest disadvantage in academia.

This is why it is crucial to be aware of these issues and to plan for them. There are no easy answers, but the better we do, the more we help all students. After all, stopping plagiarism isn’t just about detecting cheaters, it’s about creating better academics.

Simply put, better and more equitable plagiarism policies can play a small role in creating a more diverse academia of tomorrow. That’s a win-win for everyone, including students such as Martínez.