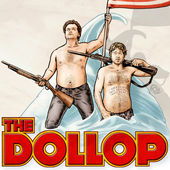 The Dollop is a comedy podcast focused on American History. It has been wildly successful on Patreon, bringing in nearly $2,500 per month, and has a strong a presence on Reddit and other social media.

The format of the show is fairly straightforward. Cohosts Dave Anthony and Gerth Reynolds pick a topic each week to discuss at length. Typically this is done by Anthony reading about a particular event in history and the two cohosts making various jokes, comments and observations as the story goes along.

To achieve that, the duo use a variety of sources, mostly online. However, last week one of those sources was less than happy about their appearances. Alan Bellows, the founder and managing editor of Damn Interesting, a popular blog that itself focuses on telling interesting and unusual stories, posted a open letter to the writers of the Dollop accusing them of blatant plagiarism.

According to Bellows, in at least five separate cases, The Dollop used stories on Damn Interesting, reading them largely word for word, with comments and commentary in between. All of this was done without permission from Bellow nor attribution to him or the site.

Shortly after the allegations were filed, The Dollop posted its response. In it, they claimed that the use of the content was a fair use, but they admitted that they had failed to properly attribute their sources because they didn’t have an official website to post such notes on. They said they have created such a site and aim to do better from now on.

Bellows, for his part, seemed satisfied with the response, saying in an update that, ” I received no apology, but I think I observed remorse. There are plans afoot to set things right, the matter is tentatively settled.”

Still, looking at the comments on both posts, it’s clear that there’s still some anger from fans on both sides and, more importantly, a lot of difficult questions. Questions that I’ll do my best to parse, both from a legal and an ethical standpoint.

Right off the bat, it’s pretty clear from the evidence Bellows provided that The Dollop did use his content. To that end, Anthony admits as much. It’s very clear that Anthony was reading from content on Damn Interesting, altering it only modestly and stopping to make make jokes.

It’s also pretty clear, from both sides, that while this was going on there was no attribution. No show notes, no links, not even a brief mention in the podcast itself. However, The Dollop responds to this with three key points:

Personally, I don’t find their first two arguments convincing at all.

Regarding the lack of attribution, while it is true that having a website is great and offers a convenient place to put show notes, it’s far from necessary. Show notes for the Copyright 2.0 Show, for example, are handled through Diigo. However, there are countless bookmarking services that let you create lists of links that can be easily shared on Twitter, Facebook and even iTunes descriptions.

If all else fails, they had the option of mentioning the sites as they visit them in their podcast. While that breaks the flow, it could have easily been done.

The truth is that The Dollop could have easily created appropriate show notes and distributed them over their various channels but chose not to. It simply wasn’t a priority for them. While I’m glad that they are correcting this, blaming it on a lack of a website is, frankly, disingenuous.

By using (IE: publicly performing) the exact words from from Damn Interesting. they crossed the idea-expression divide and were actively using copyrighted material. If they had rewritten the text or just spoken off the cuff using only the facts as a basis, they wouldn’t have faced a copyright issue at all (though a plagiarism one might still exist if the use isn’t attributed).

Instead, they used the exact words and exact expression from the source material, creating allegations of copyright infringement.

So that, in turn, brings us to their third point, the one that’s much more complicated.

The Fair Use Question

In his response, Anthony seemed very confident of his fair use position and even said he consulted an attorney about the podcast. However, fair use is a complex and nuanced field. It is completely impossible to know for certain if a use is fair or not until a lawsuit is filed and a judge and/or jury has ruled on the matter.

That decision will be based upon four factors, with the first and fourth factors carrying the most weight:

How exactly those factors are weighed and what’s decided varies and it’s easily possible for two sensible people to look at the same set of facts and come up with different answers, even two judges.

For me personally, I can see both sides pretty easily. The satirical nature of the use likely gives an advantage to The Dollop on the first factor, but, given that Damn Interesting has its own podcasts, there’s a legitimate argument that it harms the potential market for the work.

The big question comes down to whether or not The Dollop made transformative use of Damn Interesting’s content. That’s a very difficult question but, given what I’ve seen, heard and read, especially in the light of cases like the recent Cariou decision, my instinct is to say yes.

However, if I were in the shoes of Anthony and Reynolds, I would not lean on this. Not only is this just one layperson’s opinion, but even if it’s true, that doesn’t mean it’s ethical.

Podcasts like The Dollop work best when they’re done in a cooperative manner with content creators. Using large portions of work from other content creators without permission or attribution does nothing to support their efforts, the only serve to enrich your own.

In short, this is an opportunity to learn, grown and do better. If Bellows can forgive, so can others angered by this, but only if it leads to real change.

If I were advising The Dollop, my biggest suggestion would be this: Post clear, concise show notes with every episode from now on.

Make those show notes available everywhere you can including your site, your Reddit posts, your Facebook posts and in your iTunes description. Don’t let the podcast travel without them if you can.

Also, if possible, don’t read directly from the source material and, if you do, indicate you are doing as such. Make it clear what is your words versus what comes from others. Most of the content that was in the original open letter could be restated easily, it would likely be better to do so when possible.

Basically, while I don’t expect a comedy podcast to follow the same attribution standards as a research paper, it is still a history podcast and it still makes heavy use of other people’s work. It needs to show proper respect to that effort and cite its sources appropriately.

History can definitely be funny, but sources without citation are not.

Of all of The Dollop’s response, it was the last paragraph that gave me the most concern (emphasis mine):

The truth is though, while it’s debatable whether copyright infringement took place, there is no debate that the podcast took text and facts written by others and used them, often verbatim, without attribution. That is the definition of plagiarism.

To be clear, it might not have been meant as such and I don’t believe that The Dollop intended to necessarily deceive it audience. However, when you use the works of others, you have an ethical obligation to support and acknowledge that work, attribution is the means to that end.

While there’s room for homage and parody, this was a case of neither. This was as podcast using third party created work as a jumping off point for their jokes and giving no attribution back. I’m glad that they are fixing the issue, but to say it isn’t a plagiarism issue is, in my eyes, a tremendous stretch.

Any way one looks at it, The Dollop failed its ethical obligations to all of the people, not just those writing for Damn Interesting, who put in the time, energy and expertise into writing the original content upon which their show is based.

To be completely clear, I don’t think Anthony and Reynolds are bad people or that they intended to hurt anyone, but mistakes were made and unfortunately one of those mistakes caused lots of content to be quoted verbatim without any attribution.

As glad as I am they are fixing it, I would feel better if they acknowledged it more directly.