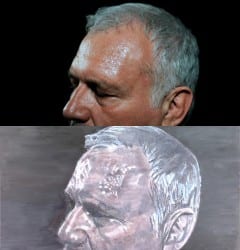 Luc Tuymans is one of the best-known artists in Europe. However, his 2011 painting “A Belgian Politician” has become the focus of both a legal dispute and a larger discussion about copyright, plagiarism and artistic expression.

The lawsuit was filed by Katrijn Van Giel, a photographer for De Standaard, a Belgian newspaper. She claims that the painting is based on a crop of a 2010 photograph she took of Belgian MP Jean-Marie Dedecker.

The similarities between the two works are very obvious and Tymans admits to using Giel’s work for inspiration. Both works feature the top portion of Dedecker’s head, cropped at slightly below the nose and portray the same facial expression on the same black backdrop.

Tymans, however, claimed that his work was a parody and was not infringing. The court disagreed.

In a ruling today a court in Antwerp ruled that the photograph was a copyright infringement and ordered Tuymans to stop exhibiting and reproducing his painting. If he fails to do so, he will be fined €500,000 ($580,000).

Though the case is far from over as Tuymans does plan on appealing, without a doubt the case has raised a lot of difficult questions about the nature of art, inspiration and where those things collide with copyright. 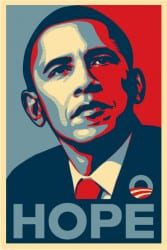 The case reminds many of a 2009 lawsuit in the U.S. involving artist Shepard Fairey and the Associated Press.

Fairey had created the iconic Obama “Hope” poster based on a photograph taken by an AP photographer, Mannie Garcia. The case led to debates about whether Fairey’s creation was truly transformative, whether it was a fair use or merely derivative.

Unfortunately, the case ended up going nowhere. It was discovered that Fairey had misled the court about which photograph the post was based on, even going as far as to submit false evidence.

This prompted Fairey’s attorneys to withdraw. Though the battle continued for another year, the two sides settled in early 2011 without a decisive victor.

However, the two cases revolved around two very similar issues, namely artists taking a photograph and creating a new visual work from it, but one in their own style.

Unfortunately for artists and photographers alike it’s a theme that’s becoming far more common and isn’t likely to go away.

Fairey and Tuymans are far from alone on this issue. In the last days of 2013, photographer Lois Greenfield filed a lawsuit against artist Jill Pankey accusing her of basing some 21 paintings on 33 of her photos.

According to court records, after being moved from New York to Texas, the lawsuit was dismissed pending a settlement.

However, the most famous case in recent years deals with photographer Patrick Cariou and the appropriation artist Richard Prince.

In that lawsuit, Prince had used some 41 photos by Cariou to create 30 works in his “Canal Zone” series. However, where the cases above focus on paintings based on a photograph, in this case Prince manipulated the photos, adding to them to create what he felt were transformative works.

While a district court did agree that the images were an infringement, the appeals court reversed that saying, of the 30 Prince works in question, 25 were protected under fair use.

The ruling has proved to be very controversial. Photographers in particular have taken issue with the ruling, saying it opened the door to a variety of misappropriation under the guise of fair use.

But that raises the question. How is it Prince can use so much from the original work and have his use protected when Tuymans recreated the wire grin scratch and was found to be infringing? The reason is because the two cases were tried under very different laws.

Belgian law, for better or worse, is completely different from the U.S. when it comes to matters of fair use, or fair dealing as it’s called in most other countries.

While the definition of fair dealing varies from country to country, fair dealing is typically far more limited and scope and far less flexible than fair use. Uses of a work that would be seen a “fair” in the U.S. are routinely on the wrong side of the law in other countries.

In Belgium, we saw this very clearly when Belgian newspapers successfully sued Google for copyright infringement in Google News. Widely considered a clear fair use in the U.S., Google News failed to find protection in the exemptions provided in Belgium.

The same is true for Tuymans. Whether his use would be found to a fair use in the U.S. is up for debate, but the exemptions in Belgian law clearly did not protect it. This is why, when arguing the case, Tuymans claimed the work was a “parody”, which is protected under Belgian law, though it very clearly wasn’t.

Tuymans lost his lawsuit for the same reason that Google lost its, the exemptions in Belgium are considerably more narrow in Belgium and, regardless of where the use would stand in the U.S., they aren’t protected in Belgium.

Cases like these dig at the very heard of both what art is and what copyright is meant to protect.

There are, unfortunately, no easy answers and legislatures, judges and juries have long wrestled with these challenges. When does inspiration become an infringement? When does appropriation become plagiarism? Etc.

I don’t have the answers to those questions and, frankly, neither does the law. Any law.

The law and its arbiters are simply doing the best it can with the facts it is given.

After all, the cases that stir controversy don’t just write caselaw, they write the talking points that will spur the public and legislative debates in the future.

So, appeal or not, this is likely far from the last we’ve heard about this case, especially if you are in Belgium.