As the sun rose in Newcastle, UK (at an uncomfortable 4:15 AM due to how far north the city is) it dawned on the second day of the 6th International Integrity & Plagiarism Conference (6IIPC) and the first full day of events.

Since it was the official start of the conference, the festivities began with Will Murray of Plagiarism Advice led off with a welcome address.

His welcome address aimed to provide a historical context to the conference by discussing the history of plagiarism, starting with the first use of the word plagiarism and working through to the modern day. He then concluded the history lesson by asking a simple question, whether we have lost anything by limiting remixing and adapting of work, a question that was intended as a segue for the first keynote speaker of the day. 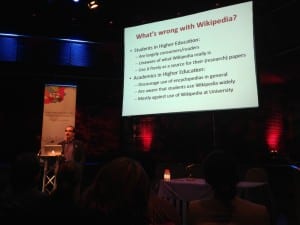 Though Toni Sant‘s “day job” is reader in digital curation at the University of Hullâ€™s School of Arts & New Media, he was at the conference representing his part time passion, being the education organizer for Wikimedia UK.

His pitch was fairly straightforward, he felt that the stigma against Wikipedia (and other Wikimedia projects) in education was unfair and that there were many ways in which schools and Wikipedia could work side by side.

He talked a great deal about the various quality control tools that Wikipedia has to prevent poor quality articles from being published including bots that weed out vandalism and a rubric for determining the quality of an article, ranking it from a stub to a featured article. He said that Wikipedia should be trust the same as any other encyclopedia, no more no less, but noted that academia discourages the use of all encyclopedia.

So rather than making the argument that Wikipedia should be an acceptable source, he said the best way for students to use the site was not as a tool to write from, but as one to write to. He encouraged teachers to create programs that had students write articles that met the site’s quality guidelines, saying it would enhance study and critical thinking skills.

He also touted the Wikipedia Education Program, which has been a tool to help educators bring Wikipedia into the classroom. Sant said the first semester was wild success, receiving over 20,000 articles and some 14 million bytes of text when the original goal was just 11 million bytes.

Parallel 1 – Vikki Anderson and Sue Onens – How Do Students Gain an Understanding of Plagiarism and How to Avoid It? A Case Study at a UK University

For the first parallel session of the conference, I opted to listen to Vikki Anderson and Sue Owens discuss a study they had conducted at a university in the UK.

Though there was a lot of interesting findings, the key takeaway was that students need to be reminded of citation practices throughout their time in college, a so-called “drip feed” method of providing information. This is a sharp contrast to how many schools handle the matter, namely by dumping a lot of information about plagiarism on students when they first arrive and never approaching the subject again.

They also found that lectures were more useful than text works, which may or may not be read, and that, while students and officers alike think of plagiarism detection software as a deterrent and as a plagiarism detector, most students wanted access to their originality reports as a form of feedback.

In the end, the duo concluded that here was no need for the school to spend additional resources addressing plagiarism and, instead, should simply refocus some of their ongoing efforts to be more effective.

Bruna Abreu told the tale of two students who were taking a particularly difficult program at her university, Universidade