The 6th International Integrity & Plagiarism Conference (6IIPC) is now in session in Newcastle, UK. As happens every two years, the best and brightest in the field of plagiarism and academic integrity have descended upon the northeast of England and are discussing everything they can on the subject including policy, technology and even larger discussions about what is or is not plagiarism.

The list of attendees is a veritable who’s who of plagiarism, in particular in academia and I’m very honored to not just attending but speaking this year (as well as charring several events).

On that note, this year’s conference is a bit different from previous years in that it is being broken apart into 3 days, not just two. However, the first day was admittedly a shorter one with just one “Starting Out” session and one keynote being open to all attendees.

But even though it might have been a shorter day, it still played a crucial role in setting the tone for the rest of the conference and still had a great deal of information.

On that note, here’s a look at what took place at day one of the 6IIPC!

Unfortunately, due to some confusion about the nature of this event (and my mistaken belief it was closed off to most attendees), I didn’t go. However, Dr. Deborah Weber-Wulff was kind enough to share with me her notes and I spent a great deal of time discussing the event with others who were there.

This five-hour session featured talks from three different speakers, each from a separate country and each discussing the challenges and difficulties they faced in establishing a plagiarism policy at their school.

Randa Al-Chidiac, from the Holy Spirit University of Kaslik, Lebanon spoke about some of the mistakes her school made in implementing a plagiarism policy, including that they subscribed to plagiarism detection software before adequately preparing the staff and how their implementation of a policy was largely reactive, coming after a series of incidents.

She went on to say that any such policy had to be spelled out very clear, noting that faculty members want a flowchart for how to handle such cases, and that it was important to not rely exclusively on software as faculty has to learn how to interpret the results. She further encouraged faculty to stay positive and act as if there is an atmosphere of academic integrity.

Loc Pham Quoc, from Hoa Sen University in Vietnam said that many in his country feel that it is acceptable to plagiarize so long as they are a “commoner” and have no reputation to hurt, such as an esteemed academic or celebrity. However, he was quick to say that he doesn’t feel that plagiarism is a product of a culture and that the any culture can be changed with enough effort.

For him, technology came last as part of the solution as his focus was on advocacy and outreach. He is hoping to both educate and change minds on plagiarism in the country. He further encourages instructors to create plagiarism-proof assignments and work to teach students proper ethics.

Prof. Wole Morenikeji from the Federal University of Technology in Nigeria said that the problems with student plagiarism in his country were well known but the biggest problem was the faculty, who either wasn’t eager to take action or leaned too heavily on plagiarism detection software, without understanding how to interpret results or how such tools can be defeated.

He went on to say that, while his University has been doing well and earning accolades, there is still no national policy in Nigeria.

From there the event became a conversation with everyone in the room, including the audience, discussing their issues with establishing and enforcing plagiarism policies.

Several of the key issues were the over reliance on detection software, with one person saying that, in their country, learning to defeat such tools is a “sport”, and overcoming the resistance to change on plagiarism issues. 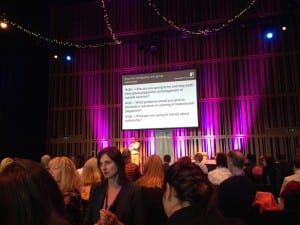 Adrian Slater is a solicitor and head of legal services for the University Leeds here in the UK. His keynote was on an unusual topic, the nature of group work and how to improve it.

They keynote focused on questions such as “Why do students not enjoy group work?”, “Should students select their own groups or be placed in groups by an instructor?” “How do you solve the freeloader problem in a group setting?” “Do you grade the entire group as one or try to grade each person’s contribution individually?” and so forth.

There were no easy answers as every solution had different issues raised. However, it was revealed that studies showed that students (and others) like group work so long as they aren’t being assessed, meaning that schools can use ungraded work, especially in the first year or two, to get students used to working in a group and then begin grading it later.

For over half of the keynote the audience was split up into a groups of various sizes and structures. They were then tasked with coming up with answers to prompts. These prompts mostly answered questions that were raised during the first part of the keynote.

A team of “assessors” judges the groups and selected a winner to receive a large box of chocolates.

The keynote touched on the issue of plagiarism by framing it in terms of how to handle it with group work. Is it fair to punish the whole group for one plagiarist? How does one determine who plagiarized in a group setting?

All in all, it was an interesting talk that took a closer look at a topic few in academia think much about.

Based upon conversations I’ve overheard and participated, some key themes are already starting to emerge from this conference. Here are the ones I’m hearing the most about:

All in all, it is shaping up to be a great conference. I’m looking forward to heading back for day to and I will return tomorrow with a recap of that as well.

In the meantime, stay tuned as there is a lot more from the 6IIPC coming your way!