Yesterday, I wrote about how we were in the golden age of legal access to content. It’s an article about how between Spotify, Netflix and other services, there is no reason why anyone should be hurting for legal entertainment.

Today, Amazon announced a new service that seems like it should only further that sentiment, Amazon Prime Music.

Given away for free to all Amazon Prime members, which currently costs $99 per year, Amazon Prime Music connects with Amazon’s existing Cloud Player to provide over one million songs for free streaming. Combined with Amazon Prime’s Netflix-like library of movies and TV shows and free two-day shipping on eligible physical goods, many will look at it as a great deal.

However, Prime Music hasn’t turned out to be everything that it could or should be. For a company as great as Amazon, the launch of Prime Music has been met with negative reviews and legions of commenters saying that Spotify and its competitors have little to worry about.

More importantly though, Prime Music is an example of why competing with Spotify is difficult and the challenges that any technology company must overcome to create a service that not only competes favorably with existing and entrenched market competitors, but illegal piracy. 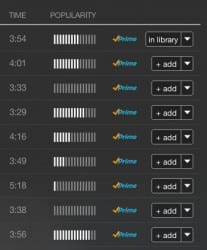 Amazon Prime Music has largely fallen flat for two reasons, both of which are fixable as the service goes along, but will likely keep it from being a major competitor until they are addressed:

These problems, of course, can be fixed. They can sign a deal with Universal, they can fix their interface and they can revamp the service in a slew of ways to better compete. While that’s admittedly more difficult to make changes to an existing service, it’s still possible and Amazon has shown in the past it can pivot when necessary.

Still, when a company as large and powerful as Amazon stumbles out of the gate with such a service, it shows how difficult it is to launch and why the golden age of content has to be a marriage of technology and content.

Months ago, as rumors about Prime Music were swirling, it was said that Amazon was in the process of negotiating licenses with record labels and publishers. However, rather than seeking a complete library, they were looking for a variety of tracks that they could obtain at a discount.

This took the format of a different licensing model. Rather than paying a percentage of its revenue, as Spotify and others do, Amazon offered a flat royalty amount. While Warner and Sony clearly felt that the price was right, Universal did not opted to stay away from the service for the time being.

Amazon’s choice here is understandable. Amazon wanted to keep their costs fixed. For the labels though, this represented a gamble. If Amazon Prime Music becomes as big hit, their royalties don’t increase as more music is streamed. Essentially, the labels are betting against Prime Music being a huge success by accepting this royalty structure.

However, the bigger challenge is with the software itself, which is based on Amazon’s Cloud Player. Amazon Cloud Player, which is already not particularly well-liked, is designed for streaming a user’s personal library, not a universal library of music. This is why users have to add music to their personal library before listening to it, even if the songs are free.

While Prime Music is an interesting addition for those who already have an Amazon Prime account, those simply looking for a streaming music service will probably want to look elsewhere for the time being.

Why This is Important

So why is this important to look at, especially on a site focused on copyright, plagiarism and content creation issue? There are two key reasons.

First, if this is truly the golden age of legitimate content, it’s going to be because of a marriage between technology and content. However, like any marriage, it can break down for an infinite number of reasons.

However, traditionally when marriages between creators and tech companies content creators have taken the brunt of the blame. For example, back in 2011 when Activision dropped the Guitar Hero line, many blamed royalty demands from the record labels for the move, not the passing of a fad or the fact the market was saturated.

While content creators certainly have made missteps, they aren’t responsible for every failure. To understand why a service doesn’t live up to expectations, at least initially, we have to understand the complex relationship between creators and tech companies and we have to understand just how difficult it is to create such a service, even if everyone is working together the best that they can.

But the bigger issue is the ongoing challenge of competing with piracy. Services like Spotify compete well with illegal alternatives by being affordable and easy to use. A service that can’t compete favorably with free (but illegal) services will do little to woo pirates into legitimate customers, which should be one of the ultimate goals.

Amazon’s missteps are a learning opportunity both for Amazon itself and others who are looking to enter the field. There are no easy answers, but there are opportunities for improvement.

In the end, it’s likely that Amazon will improve and hone the service over the coming months, securing more music and improving the implementation. If it does that, it could be a serious contender, especially to people such as myself who already have an Amazon Prime account.

Personally, I like Spotify, Beats, Amazon and all of the other streaming music players. It gives people like me the chance to have access to the music library of our dreams at a price we can easily afford. I want them to succeed both as companies but also as a revenue stream for artists, making it a golden age for both music fans and musicians alike.

However, services like Prime Music are up against stiff competition, both legal and illegal, and winning the fight is going to involve more than creators being willing to try new business models, it’s going to require services that are compelling enough to woo people to open up their wallets.

This is not simple and even Spotify doesn’t have the complete answer, after all, it hasn’t turned a profit yet.

However, with every misstep there is a chance to learn and grow, something every company, including Amazon, can do.