Yahoo has, in recent months and years, been working to turn around Flickr in hopes that it can convert it stagnant, but popular, photo sharing service into a modern contender.

In addition to offering up 1 terrabyte of space per account, it’s also been making changes to the interface in hopes of giving it a more modern aesthetic.

However, a new feature is bound to catch the attention of photographers and artists, two groups that make up Flickr’s core users, image embedding.

Though embeds have long been popular on other services, including Pinterest, Flickr users have not had that feature. However, with the recent changes, the public will be able to embed an image on Flickr, in a variety of sizes, almost anywhere on the web.

While the feature is limited to public photos and can be turned off if the account holder desires, its instantaneous offering on millions of Flickr user accounts is going to raise questions about what this new feature means for their work and their rights in it.

While the answers aren’t clear, the choice that Flickr users have is, even if that doesn’t necessarily make it a simple decision. 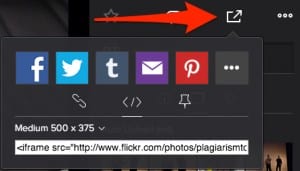 Content embedding, in the broadest sense, is a way to get content from one site onto a page of another site. When this is done without permission, it’s often called “hotlinking” but many services, including Flickr, YouTube and Pinterest, allow others to embed content from their site in other places and provide tools to make it easy.

Currently, photo embedding is enabled on all public photos where the user has not manually disabled content sharing. Private photos are never eligible for embedding.

A visitor who is interested in embedding a photo on their site simply has to click the “Share” button next to the image (see above). They will then be given the chance to choose an image size, ranging from “Square”, which is 75×75 pixels, all the way up to the largest size available for the image, which is often the original size.

The visitor is then given a piece of HTML code that they can paste into their site, which will call the image up. An example of an embed is below (this one uses a photo I took from a recent conference).

The embed includes an attribution bar that includes both a Flickr logo and the name of the original creator, complete with a link to the author’s photostream. When one hovers their mouse over the embedded image, the user can see how many times it has been starred and can open it up in fullscreen mode.

This is done by using an iFrame, which means it loads an entire Web page inside a hidden frame, allowing Flickr to overlay all of the information on top of the image without editing the original file.

The process does not result in a copy of the image being made, rather, it is loaded from Flickr’s servers, where it already exists. However, it does mean that, unless you explicitly turn embedding off, your Flickr photos can, and probably will, appear on 3rd party sites without your explicit permission.

That should give any Flickr user pause to weigh whether or not this is something they want.

The Implications of Photo Embedding

In truth, Flickr’s new photo embedding feature doesn’t represent a change in policy for the service. It has long allowed hotlinking of images on its service, making it available for third party sites to add Flickr photos.

In fact. those who have licensed their photos through Creative Commons licenses have had bookmarklets and other tools to let others embed their photos on their sites for a long time.

What the new embedding feature does do is, first, make it easier than ever to embed images on other sites and, second, give an implied license for anyone else who wants to do so, erasing any legal questions for those wanting to use Flickr images on their site.

This means that, if you don’t want your images appearing on other sites without your explicit permission, you need to disable embedding. This can be done by visiting Flickr’s site, hovering over your icon, selecting “Settings” and visiting “Privacy and Permissions”. From there, just disable “Allow others to share your stuff” and the feature will be gone. However, so will all other sharing tools too.

Those who leave embedding and sharing on will receive statistics about how often it is viewed, both in embeds and on Flickr itself.

It’s also worth noting that the embeds, unlike traditional hotlinks, will always carry attribution with them. The overlay provides not just a photostream link and the photographer’s name, but also indicates clearly that it’s a Flickr embed to anyone viewing it.

However, the overlay isn’t going to do anything to protect the image underneath it. Since it’s done using HTML, it isn’t an actual part of the image meaning that anyone who right clicks or drags the embedded image can save and reupload it at will, without the watermark.

This is in stark contrast to Flickr itself that takes steps to make it difficult to right click on or drag images to ones hard drive. While they can still be accessed by someone savvy enough to look into the HTML, it’s a layer of protection has helped many photographers feel safer using the service.

Of course, the embedding feature reduces the need and desire to download and re-upload images by providing a convenient way to get appropriately sized images into a site. However, infringement from the embeds will still happen and Flickr’s method won’t do much to prevent it.

This makes it difficult to say whether the feature is a net positive or negative for photographers though some sites, like PetaPixel, are already predicting a photographer backlash.

However, as of this writing that backlash has failed to materialize, both because the feature is so new and the fact that anyone upset about it can simply switch it off.

In the end, the question is simple, if you’re a Flickr user, do you keep embeds enabled or turn them off?

The answer to that comes down a question of its own: Does your desire for more exposure outweigh your desire to control every use of your images?

If you are comfortable giving up some security in your images for more exposure, then the embeds are likely a great idea. Flickr’s system doesn’t allow direct commercialization of the photo, preserves attribution elegantly and makes it simple for others to share.

If you prefer tighter control, license your photos to third parties as part of your business or just want to centralize where your photos can be found, you need to disable this feature immediately.

The only thing that has me curious is the lack of protection on the embeds. While I don’t usually support no right click scripts and other on-site content protection systems, Flickr’s manages to protect images reasonably well without negatively impacting the experience of the legitimate user. It is fairly elegant and, while not nearly 100% effective, adds a layer against novice infringers.

Why that same feature wasn’t brought into the embeds isn’t clear. But it is important to remember that, if you opt to leave image embedding on, your photos will have less security when they are posted on other sites than they enjoy on Flickr itself.

When it’s all said and done, if you’re a Flickr user, the choice is up to you and what you want out of your account.

For many, if not most, it’s a very worthwhile trade. For some though, it is going to be seen as a weakening of their protections and rights. Especially for those who make a business licensing photos, it could even affect their livelihoods.

While those in the latter camp likely won’t be large in number, they will be among Flickr’s most dedicated users.