Back in 2010, I wrote a review of the Viper Anti-Plagiarism Scanner and, to put it modestly, I was not impressed. I found the service, which can be found at ScanMyEssay.com, to be slow, poor at detecting matches and generally far less useful than similar services.

Like most ineffective plagiarism detection services, I quickly forgot about it and moved on. However, it appears that it may have been a mistake.

Last week, Zulfiqar Ali Khan, a researcher at the Syed University of Engineer, wrote me seeking help getting a paper of his removed from an essay mill website (a website dedicated to posting copies of essays for students to use and often plagiarize from). When the paper eventually came down, the site involved explained that all of the content on its site was sourced from the Viper Anti-Plagiarism Scanner. They provided a link that indicated how that happened.

In short, the terms of service of Viper make it so that every single essay checked through it is, eventually, posted on one of a network of essay mill sites and there is nothing that the rightsholder and creator can do about it.

But while Viper does openly admit to doing this, their claims of being “transparent” ring hollow as the information is well-hidden on their site and it’s possible, if not likely, most people using the service are unaware that Viper is feeding their essays to various sites with the intent of making the available for others to use.

Unfortunately, this is just another cautionary tale about working with questionable plagiarism detection services and the dangers that they can pose.

What Viper is Doing

Viper, like most plagiarism detection services, has a terms of service. While most of the TOS is dedicated to your license to use Viper and its software, a section entitled “Store and Use of Your Documents” deals with the license you grant Viper in the work you submit.

That section, in turn, mentions the following:

When you scan a document, you agree that 9 months after completion of your scan, we will automatically upload your essay to our student essays database which will appear on one of our network of websites so that other students may use it to help them write their own essays. You agree that any right you may have to remuneration for such use of documents is waived. You may not use the Viper Software to scan documents for which you do not hold sufficient intellectual property to be able to authorise us to use the documents in accordance with the terms of this licence.

It then also provides a link to the page above, further explaining its policies.

What this means is that, once you submit an essay to Viper, first it is immediately stored in its database for later comparisons. This part is fairly mundane and is done by other plagiarism detection services.

However, after 9 months, the essay is then posted on a public website for students to use. These sites, often called essay mills, claim to be study aid tools but are widely used by students seeking to find essays to plagiarize in their own coursework.

In short, 9 months after using Viper in a bid to prevent plagiarism, the essay will appear on a website where students will likely be looking for content to plagiarize themselves.

While Viper claims that it is being transparent about the use of your content, to me, that is debatable.

There’s no mention of this policy on the front page of their site and, as I tested earlier, it’s possible to go through the entire process of setting up an account, downloading and installing the Viper software without being clear.

in fact, the only time it’s mentioned at all is when you agree to the terms of service, but even then, it isn’t mentioned explicitly. 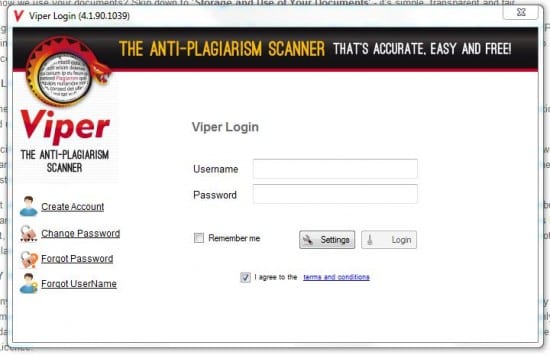 Even then, you have to be sure to click through to the TOS and read it. Nowhere is there a clear statement that submitting your article allows them to republish it, on an essay mill site no less.

Unfortunately, according to studies, only 7% of people actually read the TOS and many of those who do may still not have seen it as the information (other than a warning at the top) is near the bottom.

By those numbers, at least 93% of people who use Viper are, most likely, completely unaware of how their essays are being used.

This raises the question where this type of contract is legal and, if so, what can be done about it?

Generally, the courts have upheld clickwrap licenses and contracts. This is how most TOSes are enforced. However, as the EFF pointed out in a whitepaper in 2009, it isn’t as simple as getting the user to click “I Agree”.

The fact that the TOS link is displayed next to the tick box (instead of the tick box being at the bottom of the TOS itself) and the unusualness of the license may hinder the users’ assent, or agreement, of the contract. While it’s unclear, there are reasons to think that, in the U.S., there could be legal challenges.

However, Viper is based out of the UK so such questions about U.S. law are largely irrelevant and my knowledge of UK law is severely limited in this area.

That being said, there is another legal question: What happens when a user uploads an essay that they did not create or hold the copyright in? Since they are not the copyright holder, they have no ability to agree to the license and waive those rights.

While it’s true the Viper TOS forbids the uploading of essays not created by the user, as we just stated, most users probably didn’t even read the TOS. Since using plagiarism detection tools to check the work of other people is an extremely common use, if not the most common, many of the essays Viper is sourcing are, most likely, infringing the rights of the author.

This is further muddied by Viper itself, which, on its “Universities” page, actively encourages teachers, who are not copyright holders, to submit the work of students. Theoretically, this would be a violation of their own TOS and would make the use of the students’ essays on essay sites an infringement.

However, even with the contract and ethical issues set aside, this is a terrible way to source essays. Not only is there no check for quality, but you have no way to be 100% sure that you have a clear license to use the content.

What it comes down to is this: An anti-plagiarism service is using the essays submitted to it to feed sites that are widely used by plagiarists seeking content to copy. To do this, they are using a TOS that, most likely, only a fraction of their users have read and are purporting to be transparent about the process.

While it’s very possible that Viper has improved, from a quality standpoint, in the years and versions that have passed since I reviewed it, this is unconscionable. While I understand that plagiarism detection firms need to make money and it’s a tough market to thrive in, this is, in my opinion, not an acceptable way for such a company to do business.

There are many excellent plagiarism detection alternatives out there ranging from free to expensive that do not do this and most offer much better detection.

I would advise anyone who cares about the work they produce, to go with one of those.