Update: After this article was finished, but shortly before it was published, Senator Paul announced that he is restricting his office to prevent future plagiarism occurrences.

When it comes to plagiarism in politics, in particular U.S. politics, there’s a tendency among commentators to let ideology overpower the plagiarism issues involved.

Whether it’s the 2008 scandals involving Barack Obama, John McCain or Joe Biden, it seemed that how people felt about the issue had more to do with their political views than their views of the plagiarism.

However, one thing that was true for all three scandals, and most plagiarism scandals in U.S. politics. These scandals were, in the long run, non-issues. They were scandals of the day, mostly forgotten, save by political opponents, when the news cycle moved on.

No political careers were impacted, no elections won or lost and no real lasting impact was made, rightly or wrongly.

So when Senator Rand Paul found himself at the center of a plagiarism scandal last week, it could have easily been the same story, a brief scandal followed by a flurry of interest that quickly waned.

However, it hasn’t been that way for Senator Paul. Now over a week after the initial allegations, the story is attracting more attention than ever and new allegations seem to be cropping up daily. Rather than quieting down, the uproar over the alleged plagiarism seems to only be growing louder.

So what makes Senator Paul’s case so different and is it something that will likely haunt him over an even longer term? To find out we have to understand what happened and what makes his case unique. 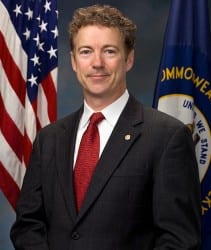 (Note: I posted many of my initial thoughts on the scandal on the iThenticate Blog here.)

On Monday the 28th, Rachel Maddow, a liberal political commentator and staunch critic of Senator Rand Paul, ran a segment on her show highlighting similarities between a recent speech that the Republican Senator gave earlier in the year.

In the speech, Senator Paul made reference of the dangers of Eugenics and referenced the 1997 movie “Gattaca”. However, according to Maddow’s comparison, when describing the film at least four passages in Senator Paul’s speech were lifted either verbatim or near-verbatim from Wikipedia.

But even as the first set of allegations began to attract interest from other news outlets, the allegations were compounded the next day when the site Buzzfeed found evidence of a similar plagiarism in a June 12, 2013 speech that Senator Paul gave referencing another movie, “Stand and Deliver”.

Initially, Senator Paul did not speak out about the allegations but, when pressed about it, he responded by saying that he cited the primary sources, the films themselves, and made no attempt to take credit for anyone else’s work in his speeches.

However, when that failed to placate his critics, Senator Paul did promise to be more cautious about citation in the future, but then reignited much of the debate by claiming he wanted to “duel” many of the people filing the accusations against him.

Now, two additional allegations of plagiarism have come to light to light. In the first, BuzzFeed is accusing the Senator of having copied over 1,300 words in his book “Government Bullies” from a 2003 case study by the Heritage Foundation. In another, they are accusing the Senator of plagiarizing an op-ed he wrote for The Washington Times from an article that was published a week earlier.

In short, the story is still very much a developing one, even a week after it began, and it doesn’t seem like it’s going to stop any time soon.

Why Rand Paul is Different

On the surface, Senator Paul’s scandal (at least the initial allegations) has the most in common with John McCain’s issues in 2008. Both are Republican Senators with Presidential aspirations that were accused of plagiarizing from Wikipedia in their speeches.

However, McCain’s plagiarism was much less cut and dry, consisting of chunks of similar text but not much verbatim. Also, there were no follow up allegations of plagiarism, in fact, an earlier allegation of plagiarism was withdrawn after after it was reveled McCain was likely the victim and not the plagiarist.

But the biggest difference may be the response. Where Senator Paul and his team have been very aggressive in their denial, McCain only said he did not copy from Wikipedia, and left it there.

While Senator Paul can’t exactly say he didn’t copy since the evidence of copying is more than clear enough, Senator Paul’s response has done little put the issue to rest and, if anything, has greatly exasperated the scandal.

Senator Paul’s initial response, to say that he attributed the movies involved, either showed that he lacked understanding of what he was being accused of or what plagiarism itself is. No one has accused Paul of lifting the plots of the movies, but rather, lifting specific wording used to describe those plots from Wikipedia without attribution.

By claiming to have attributed the films, Senator Paul not only failed to address the actual issue, but made it appear as if he were trying to duck responsibility. This, in turn, only gave additional ammunition to critics and journalists alike.

But if his initial response was misguided, his more recent one, accusing those who are raising the plagiarism issue of being “haters” and musing about dueling them, was something far worse.

The allegations of plagiarism have been raised by more than just political opponents. Academics, non-partisan journalists and Wikipedians are all among those filing accusations about Senator Paul. While it’s truthful to say that the accusations initially came from a partisan source, they have now expanded well past that and, thanks in part to his response, they continue to grow.

Whether or not Senator Paul could have completely escaped serious repercussions from this scandal is up for debate (though looking less likely as new allegations come to light), but one thing is clear, his response to the issue has done nothing to help make it go away.

I’ve never been asked by a politician (or anyone else) to help advise on how to deal with a plagiarism scandal, but if I were the advice I would give would be simple:

However, one doesn’t need a background in plagiarism to know this approach. It’s practically public relations 101 and it’s exactly how most politicians caught in a plagiarism scandal have handled the issues.

Senator Paul, on the other hand, has gone on the offensive against the people who have accused him of plagiarism, calling them “haters” and saying he wished he could duel them. That’s only encouraged further scrutiny of his work, leading to the discovery of still more possible passages.

If Senator Paul wants to put this scandal behind him, he needs to stop addressing the people making accusations and start addressing the issue, which is growing more serious with every passing day.

To be clear, there’s not much doubt that what Senator Rand Paul did is plagiarism. Using chunks of verbatim text, without citation of any sort, in speeches, books or articles is the very epitome of plagiarism. For Senator Paul to say otherwise is, frankly, disingenuous.

Whether the Plagiarism was the work of the Senator or the work of his staff remains to be seen, but until Senator Paul starts addressing the actual issue and not the people making the claims, we are not going to know.

But despite the clarity of the plagiarism, even with the recent new discoveries, we’re still talking about a relatively small sampling of Senator Paul’s work. While a few thousand words is more than enough to prove unattributed copying, it makes up only a tiny fraction of his, or any other Senator’s, output.

Still, how much the scandal harms him in the long term is going to depend on both how much larger it grows and, perhaps most importantly, how he responds to it.

His current approach of denial and counterattack is doing nothing to placate those who are criticizing him or to address the actual issues.

If Senator Paul doesn’t wish this to be a factor in the 2016 elections, the time for honesty and transparency is now. Otherwise this issue is only going to grow and may become a much larger factor, especially during the primary elections.