With the recent news that Google is ending Google Reader, there’s been a great deal of talk about how much Google services can be trusted. After all, Feedly, the seeming heir apparent to Google Reader, claims to have snatched up some 3 million new customers, indicating that Google Reader was still a widely-used service with a decent amount of interest.

But even as people grumble about the sunsetting of a service that still had a loyal following, another RSS-oriented service owned by Google soldiers on, wounded, crippled, barely function and practically begging to be put out of its misery.

That service is FeedBurner.

Though, back in the early days of this site, I was quick to promote FeedBurner as a powerful solution for tracking splogging and spamming, however, the service started to go downhill shortly after Google bought it in 2007.

Simply put, what was once a dynamic service that was well-maintained and loved began to be neglected. Updates slowed to a trickle and then stopped altogether a few years ago. Reliability issues became more common and were slow to correct themselves and, in 2012, Google did away with Adsense for Feeds, a product some webmasters used to monetize their RSS that, in the early days, was one of FeedBurner’s biggest draws.

However, at least that announcement got Google to update FeedBurner’s blog, the last update before that was in October of 2010.

FeedBurner has been allowed to languish for too long and its remaining users are suffering. To make matters worse, the Internet has changed a great deal since 2006 and the needs that FeedBurner met are no longer relevant to webmasters.

The time has come for Google to invest in FeedBurner and make it great and relevant again or, more likely, shut it down.

With the closure of Google Reader on the horizon, there is literally no time like the present.

The Problem with FeedBurner in 2013

When FeedBurner first started, it had a pretty simple sales pitch. Bloggers and webmasters didn’t have a lot of tools to help control, monetize, track or promote RSS feeds. The technology was still poorly understood by most and it wasn’t understood how it was going to be used.

However, the Internet has changed a lot since then and will change more when Google Reader finishes closing. These changes have pushed FeedBurner into obsolescence and Google certainly hasn’t helped.

In short, every reason that FeedBurner had for existing are gone, either through the changing environment or Google’s negligence.

FeedBurner, quite simply, is a product without a purpose anymore.

So Why Not Leave? 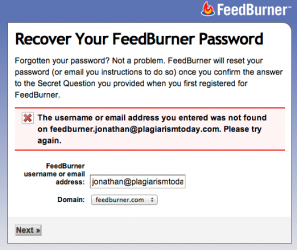 Many will ask the simple question: If you don’t like FeedBurner, why don’t you leave?

The answer is simple: I can’t.

Recently, I quietly changed the RSS URL in the sidebar to my main WordPress feed and, even before that I left behind FeedBurner’s antiquated email system in favor of MailChimp. However, for the vast majority of RSS subscribers, they’re still on the FeedBurner feed and there’s not much I can do about it.

Though FeedBurner’s usefulness waned for years, it never really did much harm. Since the process of transferring is messy and inevitably results in some subscriber loss, I decided it wasn’t worth it.

Then, some time ago, Google merged FeedBurner and regular Google accounts, requiring me to use my Google account and important my RSS feeds. However, that process doesn’t seem to work for me, I can’t access my old FeedBurner account to do the import and that means can’t start the process of canceling them.

No matter what email address, username or other information I use, I’m always told that the information is wrong and I can’t even recover the password.

Worse still, Google offers no way to contact them over FeedBurner issues and there isn’t a support forum for FeedBurner.

In short, Google has so completely abandoned FeedBurner that I can’t even leave the service properly and I know from talking with others that I am not alone.

The only thing worse than Google shuttering a product you’re using is when Google doesn’t kill it, leaving it to languish for years.

I admit my mistakes in this. I waited too long to leave FeedBurner after the writing was on the wall and didn’t pay enough attention to it as I shifted my focus from RSS subscriptions to Twitter and Facebook. FeedBurner went from a service I logged into almost daily to one I would almost never visit. That was negligence on my part.

However, for Google allow the service to get this bad is a tremendous disgrace. Google has starved FeedBurner so much that the only humane thing to do is to end it. It is in far, far worse shape than Google Reader was when its closure was announced and it seems no one can understand why it’s alive at all.

Given that Google Reader’s closure is going to shift the RSS landscape forever, it makes sense for Google to complete its withdrawal and see if the technology can flourish without its influence.