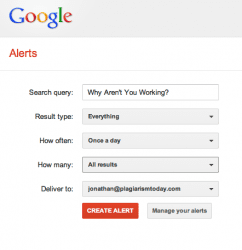 With the recent closure of Google Reader affecting so many die-hard fans of the service, questions have been raised about what Google services are next.

Much of that speculation seems to be pointing to Google Alerts.

Though no announcement has been made yet and Google employees still provide support for Google Alerts on its forums, it’s clear that Google Alerts seems to be suffering from lack of attention. Mashable, Search Engine Land, Search Engine Roundtable and The Financial Brand, just to name a few, have all posted articles complaining about the lack of effectiveness of Google Alerts.

This is something that I’ve noticed myself. The Google Alerts I have set up have slowed to a trickle. Several of the content monitoring alerts I’ve created haven’t produced results in months though new matches can be easily found elsewhere. My keyword monitoring ones, such as my alert for “Plagiarism Today” have hardly produced any results, even missing posts on this site.

Even if the rumors of Google Alerts’ demise are greatly exaggerated, it’s clear that it is not working as well as it once did. The service seems to suffer from a lack of attention and the problem appears to have been snowballing for some time.

This creates a big problem for me. In addition to using Google Alerts to track mentions of my site or my name, I also use it to track potential infringements by looking for unique quotes from the relevant content. To that end, it’s proved immensely useful.

Historically, Google Alerts has been so useful that I’ve repeatedly touted Google Alerts on this site. In fact, I’ve been doing it since 2005 and, in 2009. it was one of my favorite content tracking tools (as a runner-up to the now-defunct FairShare).

So if it is dying, what can be done about it and what can replace it? The answer is not much but there are a few solutions that may make the problems a bit more bearable.

Try to Fix Your Google Alerts

If you’re having trouble with Google Alerts, one of the first things you may want to try is changing your “Volume” from “Best Results” to “All Results”.

Though this solution doesn’t work for everyone, it has apparently worked for some.

Part of the problem is that Google, some time ago, updated Google Alerts to add this feature. In doing so, it set many feeds to “Best Results” by default. This meant that Google was filtering out relevant results and, seemingly has gotten much more aggressive about doing so more recently.

However, this trick has done nothing to help me with my content tracking alerts and it only made a small difference in my keyword monitoring ones. Still, depending on what you’re looking for, it could be a huge help. 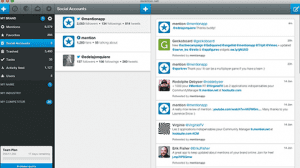 Since Google Alerts seems to be on a downward spiral, at least for now, many are scrambling to find alternatives and replacements.

Mashable pointed out one that I found particularly interesting, Mention. Mention is a service similar to Google Alerts that tracks keywords you select and emails you alerts.

While the results are emailed to you, they are actually better accessed either through the service’s site or one of their apps/extensions. The display, which is seen up above, works similar to an email inbox where you choose which alert to read, scan the list of sites found and then open up the site in the right-hand pane.

I’ve been using the service for several days not and, though I’ll likely post a full review later, it’s worked well keywords and regular queries. It’s found far more mentions of my site and my news content than Google Alerts.

However, there is a limitation. The longest keyword you can create is just four words, making it useless for tracking content. Such a short phrase would be littered with false positives and, to make matters worse, the two test queries I set up have not produced any results.

For content monitoring, both Copyscape, through Copysentry, and PlagSpotter both have automated monitoring solutions.

Still, these are much more robust copy and plagiarism detection tools than Google Alerts was, meaning they are likely worth the small fee.

The writing is on the wall here: Google Reader is closing, Google Alerts is struggling and FeedBurner is barely functioning.

Many of Google’s best tools for content consumption, tracking and protection are going away and, in pretty much every case, there aren’t many good competitors. Whether you blame Google for this by being a loss leader in a market (that they are now abandoning) or just see it as a small market without room for competition, either way Google’s departure, even if unofficial, is painful.

As someone who relies heavily on Google services, including Google Search, Google Apps and more, I’ve found myself lately rethinking my strategy and weighing alternatives.

At the very least, I’m realizing I need to know where I’m going if I have to make a quick exit.