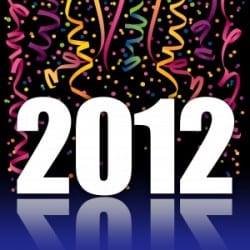 As 2012 winds down to a close and we prepare to ring in 2013, I wanted to take a moment and look back over the year that was and also examine how well I did with my (rather non-specific) predictions that I made back in January of this year.

To be clear, 2012 was a banner year for copyright, plagiarism and related issues on the Internet. As eventful as 2011 was, 2012 lived up to all expectations and proved to be even more so, even if the activity didn’t result in any significant change.

So what were the highlights and lowlights of the year? Obviously there’s too much ground to cover in just 1,300 or so words, but we can definitely look back at some of the top stories and, more importantly, put them in some kind of perspective for 2013.

Without any further ado, here’s a quick look back at the year that was and what it likely means moving forward.

The first part of 2012 was truly a banner time for copyright issues. In January you had the famous protests against the Stop Online Piracy Act (SOPA) and Protect IP Act (PIPA) in the US, which resulted in those bills being shelved, seemingly permanently. Shortly after you had international protests against the Anti-Counterfeiting Trade Agreement (ACTA), which resulted in a large multi-national treaty being signed, but only ratified by one of the countries (Japan).

These protests represented an unheard of level of participation by the public in matters of copyright legislation, though similar protests against the much-maligned “six strikes” system coming to the US in early 2013 have yet to materialize.

However, the early part of the year wasn’t just defined by protests. Also in January, just one day after the major online SOPA/PIPA protests, Megaupload was shuttered following joint action by US and New Zealand authorities. The case is still ongoing in both countries (the case against Megaupload the company moves forward in the US and against Kim Dotcom in New Zealand) and Kim Dotcom faces an extradition hearing in March. However, missteps by prosecution in both countries have put the prosecution in doubt.

But regardless of the end result of the Megaupload action, it sent shock waves through the cyberlocker scene, with dozens of smaller sites either closing, disabling sharing or otherwise distancing themselves from Megaupload’s actions.

Another recurring theme this year was the role of ISPs in fighting piracy. On one hand we either had “graduated response” systems being reevaluated, just coming online or preparing to start in early 2013 (as in the US).

In Australia, the issue became especially relevant as local ISP iiNet won a case against copyright holders, which found that ISPs had no responsibility to take action against customers on issues of copyright infringement. However, the ruling left the door open for requirements down the road and, at the behest of the country’s attorney general, ISPs sat down with copyright holders to hash out a cooperative effort, but iiNet recently walked away from those talks.

Finally, the mass-Bittorrent lawsuits have continued, with very mixed results, most recently having reached Canada, shortly after the passing of that country’s copyright modernization act, which in part limited the damages that file sharers could be held accountable for.

All in all, for copyright news it was a year that started with a bang but settled into many of the same, ongoing questions that have been plaguing copyright advocates for the past half decade.

(Note: For a more thorough rundown of my top scandals of 2012, check out the webcast I did with Jason Chu at iThenticate on the topic.)

For plagiarism, and related unethical behavior in journalism, 2012 will forever be remembered, as Craig Silverman at Poynter called it, for the Summer of Sin.

Though there were too many scandals to count, the lion’s share of the attention was paid to Jonah Lehrer, the prominent journalist who had written for publications such as The New York Times, The New Yorker and Wired Magazine (as well as three books), who was found to have built much of his career on plagiarism, self-plagiarism and fabrication.

But Lehrer wasn’t the only journalist to face allegations of plagiarism. Both Fareed Zakaria and Margaret Wente both faced allegations though, in their cases, the scandals turned out to be speedbumps rather than disasters as the issues were discovered to be one-time mistakes and not represent a pattern of unethical behavior.

Academic plagiarism also made major news this year as a major plagiarism scandal broke out at Harvard, which saw over 130 students face possible disciplinary action and, more recently, Southern Utah University’s English as a Second Language Program has faced allegations that it tolerated widespread plagiarism in students in a scandal that, in the end, led to one of their teachers being charged with theft.

In short, where 2012 started out hot for copyright news and cooled down some later in the year, plagiarism news was the reverse, igniting in the latter part of the year with many of the cases ongoing.

Obviously, 2013 looks to be an interesting year for plagiarism news.

On the subject of content theft, 2012 was a fairly quiet year for news. Google has continued regularly updating and refreshing its Panda filters, which are targeted at low-quailty sites including spammers, scrapers and plagiarists among others. However, Panda, which was started in early 2011, hasn’t made content significantly safer, even with the updates and revisions.

However, the biggest news on this front was from Google itself in a more direct manner. Earlier this year, Google introduced its transparency report for copyright notices, which details all of the copyright-related notices that the company gets, including both through its form and its backend.

For the first time, people could see who was sending the most notices, what sites they were filing against and what services they were using.

Google also promised to take that information and bake it into their search results, creating the so-called Pirate Penalty. The theory was that sites with a lot of notices of copyright infringement would be reduced in the results. However, the penalty has turned out to be something of a dud as many known-infringer sites still rank well for popular terms.

For the most part, content creators, especially smaller ones, are in largely the same position at the end of 2012 that they were in in the beginning. Google is playing cat and mouse with infringement issues and many believe that either Google isn’t willing to do what it takes to resolve the issue or that there simply is no way they can.

In the end, 2012 was something of a “noisy” year where not a great deal changed. Though much of the noise was protesting against unwanted change, in the end, there’s not a lot of resolution to anything as even Megaupload’s closure had a questionable impact and may be mitigated further by the potential launch of a new service to take its place.

In the end, we wrap up 2012 with most, if not all, of the same unanswered questions lingering over us and the position everyone is in is more or less unchanged.

However, the real change may be lying underneath. With the SOPA and PIPA protests showing that pro-copyright legislation can be defeated and that the Internet can rally strong opposition to such measures, as it did again with ACTA, it could be the beginning of something big.

But this tide shift will only matter in the long term if it continues into 2013 and beyond. That will be what to watch for in the next year: Will the next SOPA/PIPA/ACTA be defeated the same way? Is the public’s engagement in copyright matters a long-term proposition or was it a seasonal tryst?

Time will tell. But, when it’s all said and done, 2012 could either be remembered as a banner year for copyright, or a fluke that didn’t change anything over the long haul…