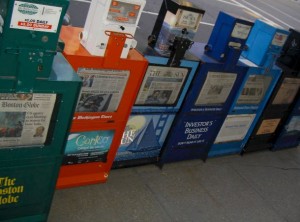 It’s been a rough summer for journalists. Even putting aside the larger troubles in the for mainstream media publications, journalism has taken a series of credibility blows as Jason Lehrer, Fareed Zakaria and now Margaret Wente all became mainstream plagiarism scandals. However, there’s also been at least a dozen smaller, lesser-known ones that have hit The Boston Globe, NPR and two Arizona newspapers.

The summer has been so rough that Craig Silverman at Poynter has called it “The Summer of Sin” and it’s a fitting name.

But what baffles me is that publications, ranging from major publications to small websites have failed to get more proactive on the issue. Almost all of the movement by the industry since the Jayson Blair scandal has been toward finding better ways to react or deal with discovered plagiarism. This included establishing public editor positions at various papers, codifying the process handling complaints and setting up protocols for dealing with Jayson Blair-like scandals.

But with fact checking and plagiarism checking being as easy as it is right now, journalists, as Wente put it, are under a microscope and being reactive to these issues is no longer enough.

If journalism, as an industry, is going to head off another “Summer of Sin”, publications need to get more proactive on these matters and that is going to mean making some difficult decisions.

Can Your Publication Afford a Jonah Lehrer?

Whenever people start talking about publications getting more proactive about plagiarism and other ethical issues, the usual response, especially from those in the industry, is that they can’t afford it. Between the costs of any technology they use, the labor they need to do even spot checking of articles and the delays such efforts will cause, many feel it’s too much to ask.

There’s a lot of sense in this. Mainstream media is in a period of retraction and any new expense is a tough sell. New media, on the other hand, is still in a fledging phase, already struggling to do a great deal with a very small staff and budget.

The problem, however, is that the alternative is much worse. With plagiarism detection and fact-checking so simple to do and easy to crowdsource, every publication has to assume that everything they put out is likely to be scrutinized and that the glare is only going to increase as they gain popularity, trust and respect.

Unfortunately. The tools for detecting plagiarism all work much better when used before publication than after. For example, it’s much easier to spot sentences copied without attribution before an article is published and you dont’ have to weed through the later copies of that work. Likewise, it’s easier to fact check something before the the bad information takes on a life of its own on the Web.

While those with adequate free time and interest can work through those challenges, especially when there is a known list of sources to check against, the process is much easier and more accurate when done before content has been released into the wild.

This makes it so that the cost of doing a post-mortem on a case of suspected plagiarism much more expensive and difficult than simply doing checks as you go. This says nothing about dealing with the loss of trust, loyalty and prestige that comes from having to deal with a plagiarism scandal post publication.

In short, if you’re going to catch a plagiarism or other unethical act, accidental or otherwise, the time to do it is before the work goes out into the public. That is when it’s both easiest and most useful.

Your alternative is to risk having to perform a much more difficult analysis while under the fire of a PR disaster. This is something that most publications can’t do and, as The Globe and Mail is showing with the Margaret Wente scandal, even larger publications struggle to get it right.

Getting Active and Getting Serious

The reason for this shift in climate is simple. The